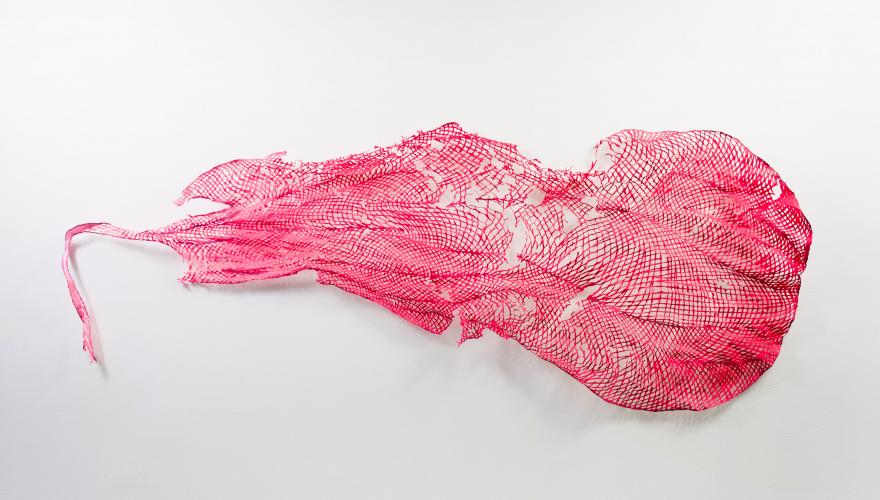 So how often do you think about trash?  Not just the contents of your own bin, but that of your neighbors, and your neighbors’ neighbors, and everybody else all over the globe, emptying cans, adding to the great planetary garbage heap? It’s not a pretty thought, and it’s one we usually suppress.

But two sharply pointed shows — protest shows, really — at New Jersey City University (2039 Kennedy Boulevard) foreground waste, and ask us to re-examine our careless relationship to what we use and discard. “Too Much! Overconsumption and Our Relationship to Stuff,” (curated by Eileen Ferrara) which’ll occupy the NJCU Visual Arts Gallery until Oct. 15, features discrete pieces done in the Hudson County post-industrial style. Many of these are assembled from materials retrieved from thrift shops and detritus heaps and refashioned into new shapes that retain the resonances of their old forms. Over at the smaller Lemmerman Gallery on the third floor of Hepburn Hall, Newark artist Amanda Thackray gives a brief but impressive solo performance. “Surface Tension” (curated by Doris Cacoilo) is highlighted by her exquisite paper nets, deliberately designed to evoke the ecological tragedy of plastic in the sea. Thackray’s work is instantly redolent of the ocean, “downhill from everywhere,” as Jackson Brown recently sang, a parallel world imperiled by our collective disregard.

“A Tangle; A Swarm; A Precondition of the Plastisphere,” which seems to float in space on the south wall of the Lemmerman, consists of overlapping paper lattices in dark greys, yellows, oranges, and washed-out reds.  It’s beautiful, delicate, and subtly sinister. Each shape feels fragile and transparent, and very much in gentle motion — tendrils that curve away from the shapes appear to be caught by a current. It suggests an amalgamation of waste, clumped together, seemingly anodyne but strangling the sea.  Should you miss the point (you won’t), Thackray makes it plainer yet on “Bottom Trawl in Repose,” a bright orange faux-fishing net fashioned from twisted paper, and downright unmissable on the column of treated, translucent sheets erected in the center of the gallery space. Here, Thackray has superimposed silhouettes of scores of waste items retrieved from the ocean on to paper marbled to appear aquatic. It’s a slice of a garbage-choked ocean: a scientist’s diagnostic sample of water retrieved from the Pacific trash gyre.

If “Surface Tension” feels like a frank examination of where we are, “Too Much!” offers a warning about where we’re going.  Yet while the critique is forceful, none of it is strident: this is a Hudson County show with Jersey attitude, which means the artists remain playful and self-deprecating, even in the midst of despair. Jersey City favorite Mollie Thonneson impales her assemblies of lingerie and thrift-store party dresses on meat hooks; the overtones of sexual violence are unmissable, but so is the joke about our collective obsession with fashion. Newark’s irrepressibly clever Robert Lach, who has quietly become one of the state’s most recognizable sculptors, contributes two of his discarded American Touristers transformed into animal nests. A conical mound of twigs and sawdust erupts from the surface of a red suitcase. It’s at once recognizable, spooky, and alien, and worthy of the cheeky title he’s given it: “Rabbit Hole.” Better, and wittier, still is “Illuminous City,” which transforms a nook of the Visual Arts Gallery into a landscape fashioned from hundreds of empty Mountain Dew bottles. Hovering over a skyline of great green towers hangs a network of globes fashioned by Thai-born artist Poramit Thantapalit from severed and conjoined bottle tops. They evoke the long chains of carbon and hydrogen atoms in polyethylene — molecular mass so weighty that it drags down the sky.

An adjacent installation by the reliably remarkable Jersey City fiber artist Maggie Ens offers a respite from the astringency of the show. “GAIA Calls Us to Healing” is a change in tone from Ens, whose work can be disquieting; instead, she’s gifted us with a piece that unfurls like a scroll, decorated with blue-green leaves and seashells, and possessing a fuzzy, welcoming, blanket-like quality.  If these artists weren’t hopeful that we could mend our ways, they wouldn’t be ringing the alarm bells in the first place. Even Thackray, sharp as she can be, seems to believe that mapping the devastation of the oceans might have a salutary effect on the collective conscience.  If we truly understood what we were doing — if we looked the monster in the eye — we’d stop. Her work is an act of faith in us. For the sake of a beleaguered planet, I hope it isn’t misplaced.

Amanda Thackray and Maggie Ens will be on site at the exhibitions on Saturday, Oct. 2.  From 1 p.m. to 3 p.m., Thackray will lead a workshop on the Hepburn Hall patio that demonstrates some of the techniques she used in the creation of “Surface Tension.” From 2 p.m, to 4 p.m., Ens will lead a paper workshop of her own outside the Visual Arts Gallery (100 Culver St.)