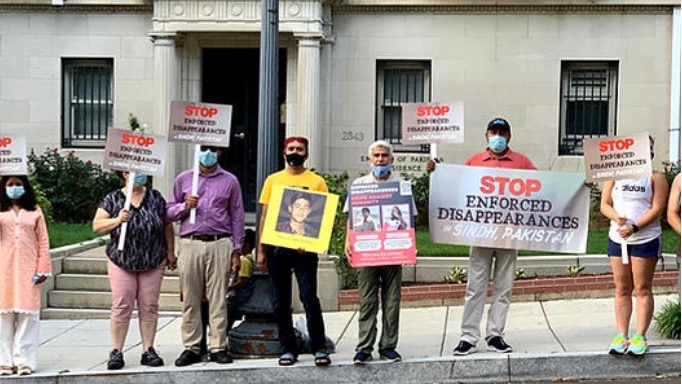 Hundreds of Sindhi Americans marched from New York City to Washington, D.C., recently to draw attention to the kidnappings and human rights violations suffered by Sindhi Hindu girls in Pakistan. Organized by The Sindhi Foundation,  the participants in the “Long Walk for Freedom, Nature, and Love” began their 350-mile trek on April 4 and reached Washington on April 7. They traversed Jersey City along the way.

I first learned about the march from my seventy-four-year-old grandfather who walked the entire distance. His passion inspired me to raise my own voice as a fifteen-year-old Sindhi girl. I decided to help those Sindhi women who are silenced in Pakistan by publicizing the cruelties faced in order to spread awareness. Even though I am only in high school, I wanted to lend my voice to this really important cause. I think people should unite and amplify their voices not only for a better Jersey City but for a better world.

Sindhis are an ethnolinguistic community native to Pakistan’s Sindh province. We are predominantly Hindu (90 percent) and minority Sikh. With that said, every year over a thousand Sindhi Hindu girls are kidnapped, forcefully married, and converted to Islam. When parents file a complaint, the police order them to leave or face their other family members being taken away. In Pakistan, these offenses are happening to girls as young as 12.

According to the National Council of Churches in Pakistan (NCCP), these abductions are on the rise. “It’s hundreds, hundreds, many girls, many girls. This crime is committed by many people, and the authorities don’t do anything,” said the NCCP’s general secretary, Bishop Victor Azariah.

The Long Walk has garnered support from Adam Schiff, congressmen of California, who said:

“I am so pleased to be able to offer a few words of encouragement and support for the long walk for freedom, nature and love. I have had the honor of getting to know more about the Sindhi people and their peaceful and inclusive culture. I am also deeply concerned to see the trends of human rights abuses in Sindh province, including disappearances, torture, forced conversions and extrajudicial killings. I hope that the long walk can raise awareness for these crimes and bring peace and justice to Sindh. I am with you as well in your efforts to call for action on climate change and environmental justice. I wish you all the best journey…”

Given that 10 percent of Jersey City’s residents are Indian, the atrocities taking place in Pakistan hit home. As America’s most diverse city, we have both the potential and the duty to make everyone feel comfortable and included.

By supporting our campaign, you can contribute to the development of a more just Pakistan and send a signal around the world that Americans do not tolerate this gross mistreatment of women and violation of fundamental human rights.