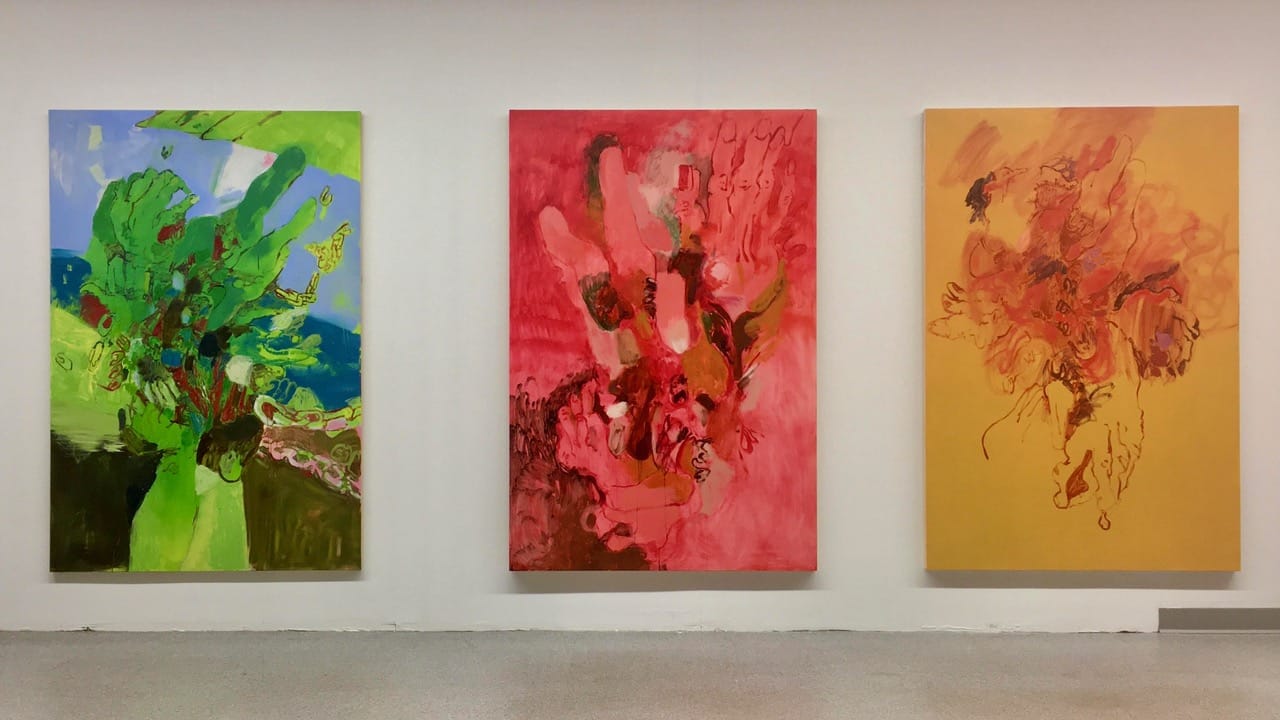 For a few seasons after the arrival of the virus, local gallerists didn’t want much to do with the corporeal. It was tough to knock them for it. The human body had begun to feel like a horrifying battleground. It was easier to look at a landscape, or a photograph of the sky, or a contraption fashioned from junk. If the landscape was deserted, if the sky was glowering, if the trash-contraption suggested a post-apocalyptic state, those signs were all we needed to understand the artist’s motivations. We knew what was on her mind.  It was the same thing that was on ours.

In 2022, the body is back.  Pictures of human beings, or parts of human beings, are, once again, on view in Jersey City art spaces.  These depictions bear scars.  Few of the bodies we’ve seen in recent shows have been intact.  The “Exquisite Corpse” show at Firmament Gallery shuffled heads, legs, and torsos between paintings, and left it to the audience to resolve the friction between competing artistic visions. Jonté Drew’s colored-pencil characters attempted to slough off their uncomfortable masculinity in an idyllic netherworld; Fabricio Suarez masticated the faces of his seafarers as if they were made of so much bubblegum; P.E. Pinkman subjected his blasé printed self-portrait to various isolation-related humiliations and tortures. Perhaps most tellingly, Raisa Nosova gave us a wallful of mammaries, some filled with actual mother’s milk, each one rendered in thick but shatterable glass.

Then there’s Stephen Wuensch, whose too-brief exhibition closes tonight at Commuter Gallery (15 PATH Plaza, on view from 4 p.m. – 8 p.m.) “Paintings by Stephen Wuensch” only contains a few works, but they’re big, substantial, energetic pieces, each one done in oil on an individual pane. These untitled paintings are combustions of bright pigment and thick brushstrokes. Amidst the clouds of color, human hands and feet are clearly discernible. Wuensch also adorns his images with illustrations of chains. They don’t seem to fetter anything; there’s slackness in the line, and in a few cases, the links appear to be shattering. It’s possible that Wuensch’s human figures are in the process of manifesting, Tasmanian Devil-like, after a long and turbulent spin through a chaotic time. It’s more likely that they’re disappearing into the murk — and that the wagging fingers and forlorn toes of these people are the last we’ll ever see of them.

What’s going on here? These fractional human characters are, surely, contending with the pandemic: the frantic energy, the vectors of fear and paranoia, the urge to flee, and the sense of physical deterioration captured in these paintings will surely be familiar to you. But there’s another reason why Wuensch’s oils are timely.  Threats to physical autonomy have rarely been as serious as they are in summer 2022.  Privacy rights of all kinds are currently under fire.  Authorities continue to tell you what you can and cannot do with your body — and they’ve enlisted the courts in a campaign of coercion. Besieged by pathogens, harassed by busybodies, probed by the police and by security cameras, there’s a very good chance that the line between who you are and who you aren’t has begun to blur.

In Wuensch’s paintings, that line has unraveled entirely. Hands and feet — the primary instruments of our physical will — are detached from anything resembling a human core. They jut out at strange and impractical angles; they’re threatened by the blobs and streaks of paint. But the more you look at these canvases, the more you realize: these are indeed paintings of people, people in an absolute tizzy, sure, but aren’t you? They’re some of the strangest portraits you’ll ever apprehend, but they’re also honest portrayals of the hybrid creatures we’re all becoming. Much as we might love to disappear into the realm of ideas and abstractions, biology and politics keep telling us otherwise. That’s what Wuensch has captured: the terrible yank on the chain that reunites us with our corporeal reality, pulls us, in a dreadful blur, back to our sacks of skin and flimsy frameworks of bones and sinew.  Stephen Wuensch has looked at the modern world and decided that our identities are about as solid as smoke. The scary thing is that he’s probably right.