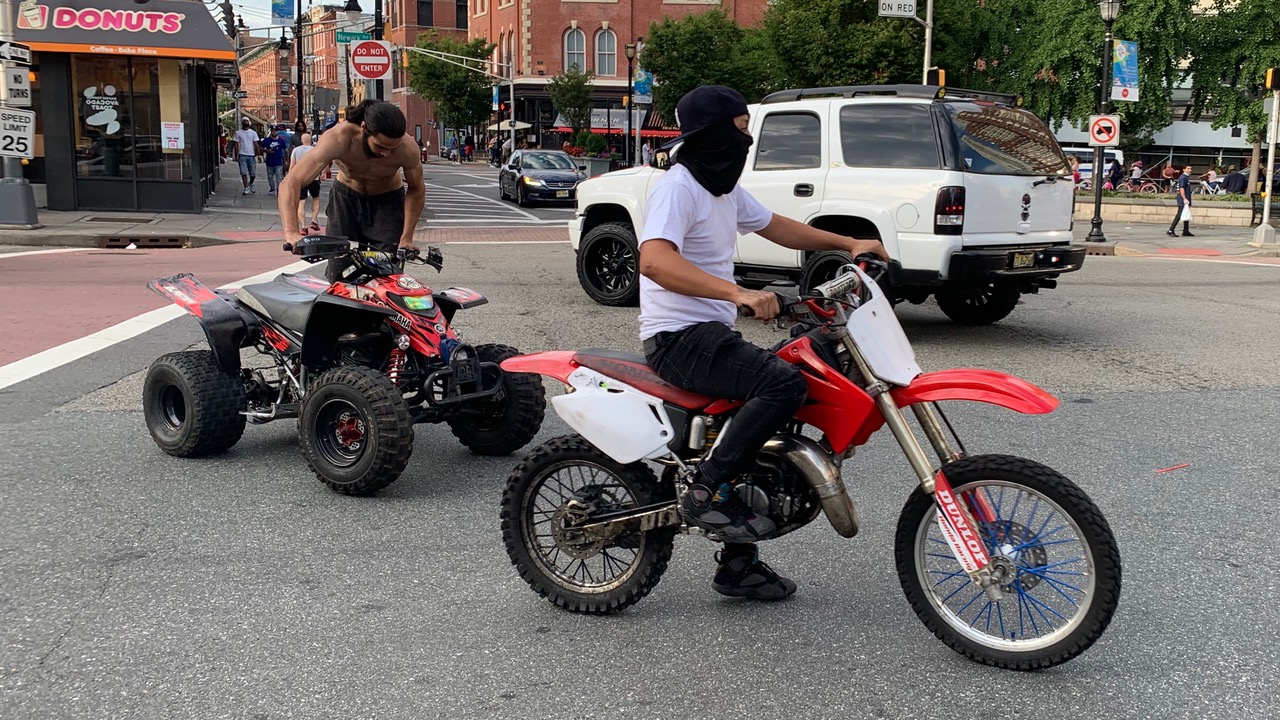 It was another night of drama Thursday night at City Hall as 24 members of the public rose to demand the resignation of Councilwoman-at-large Amy DeGise for her role in a July 19 hit-and-run at Forest Street and Martin Luther King Drive in which a male cyclist collided with her car after he went through the intersection against the light. The councilwoman reportedly waited six hours before reporting the incident to Jersey City police.

Two city residents spoke in DeGise’s defense during the public portion of the marathon council meeting which took five and a half hours.

DeGise, seated at the council dais, took in the commentary silently as a phalanx of some 15 city police officers, supervised by city Public Safety Director James Shea, maintained posts outside the building’s main entrance, around the second-floor rotunda, and inside the chambers, monitoring the orderly proceedings.

Ward C Council member Richard Boggiano, a retired policeman, told the Jersey City Times he had asked for the special police detail after DeGise had reported threats made against her life.

DeGise has said she has no plans to step down.

She awaits a hearing in Essex County Superior Court on two motor vehicle summonses charging her with failing to report an accident and leaving the scene of an accident. A court date has yet to be scheduled. The matter is being heard in Essex County given DeGise’s position as an elected official in Hudson County and the fact that her father, Tom DeGise, is the Hudson County Executive.

City resident Megan Carolan, who launched an online petition calling for DeGise’s resignation, said that 7,150 signatures had been collected: 1,300 from Jersey City residents, 1,200 from various counties in New Jersey and other signatures from 60 foreign countries. Because of this incident, she said, “Jersey City has become an international laughing stock.”

Colin DeVries said that when he was 3 years old, he was a passenger in his grandmother’s car when she had a heart attack while driving on a New York interstate highway and the car flipped over into a waterlogged ditch. He ended up strapped in, upside down, and would likely have drowned had not three drivers  pulled over to help. Without their intervention, “I’d probably have died,” he said. “I’ll never understand why you didn’t stop.”

For Elizabeth Migliore, mother of a 6-year-old, “leaving the scene” of an accident “is immoral,” and she said she was “appalled at the lack of gumption” by all but two members of the council (James Solomon of Ward E and Frank Gilmore of Ward F) who haven’t called for DeGise to step down.

But the embattled councilwoman found stout supporters in Robert Knapp, who lauded her “a trailblazer for women, someone I’m proud to stand behind,” and Rosita McGovern, who insisted that DeGise “always works in the best interests of the city.”

Both Knapp and McGovern blasted what they viewed as unfair press coverage of the incident. “Criminals who commit homicide, rape don’t receive the same type of media (exposure) Amy DeGise has received,” Knapp said. “Fairness, faith, caring and understanding” are attributes she shares, he added. “She has been an advocate for us, the people of Jersey City.”

McGovern told the listeners, “Only God can judge and the courts will decide (DeGise’s fate).” She counseled DeGise, “Stay strong, Amy, and hold your head up high. Keep fighting.”

In other business, after hearing concerns  from various speakers about the trading of high-rise development for the inclusion of affordable units, the council voted 6-1-1, with Gilmore dissenting, Boggiano abstaining, and Ward A Councilmember Denise Ridley absent, to approve amendments to the Tidewater Basin Redevelopment Plan that would create an “Inclusionary Housing Overlay District” and to expand the list of permitted uses in the “Historic Buffer Zone.” The vote took place after a public hearing. 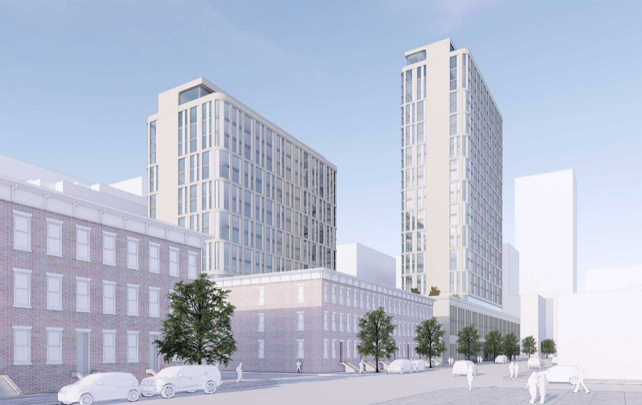 The council action clears the way for Sussex Street Associates and the developer known as Silverman, to build a 26-story structure on a portion of Grand Street and a 16-story edifice on Sussex Street. Those buildings will be linked to a 4-story base.

About 400 rental apartments and parking for up to 200 vehicles would be accommodated by the two buildings.

The new development would dedicate no less than 15% of the project’s 60 total residential units as “affordable.”

New “permitted uses” at the site will allow for mid-rise (1-, 2- and 3-story) residential buildings to rise on lots of 2,800 square feet or more, conforming to a maximum density of 55 residential units per acre, along with spaces reserved for offices, stores, cafes, restaurants, recreation, child care, and schools.

Diane Kaese, president of the Historic Paulus Hook Association, said the amendments violate the city’s master plan by making incursions on smaller-sized neighborhoods like Paulus Hook. And, she said, the high-rise construction would likely contribute to further flooding in the area.

Laura Lithgow, who lives near the project site, also protested the development but on different grounds. She argued that 60 affordable units were “not enough.”

Several speakers said, however, that it was worth accepting some quality-of-life sacrifices to get more affordable apartments Downtown within reach of public transit to take advantage of a good neighborhood school and jobs in Manhattan.

The majority of the council agreed. Ward D Councilman Yousef Saleh said: “We have to build up to get affordable housing,” which, he said, will be a boon for downtown residents, particularly in light of a “national housing shortage.”

DeGise said the issues at hand were “extremely complex, but I feel (voting for the amendments) is the right thing to do.”

Solomon conceded that “neighbors are going to lose their light (due to nearby towers) and they have a right to be upset,” but he said he was voting for the amendments because “this is the first project under (the city’s newly passed) IZO (Inclusive Zoning Ordinance), and it’s going to set a precedent.”

The council also adopted two new laws calling for the “impoundment of snowmobiles, all-terrain vehicles, and dirt bikes operated on public streets” and to “prohibit the use of bicycles, scooters, skateboards, and roller skates in pedestrian plazas.”  Solomon said he’d urge the council to consider amending the second regulation to prevent ticketing people for “walking their bikes” through plazas.

At the request of city Business Administrator John Metro, the council tabled for further review the award of an $800,000 Affordable Housing Trust Fund contract to Team Walker for a project to create six affordable units at 373-379 Communipaw Ave. and the award of a $314,000 Community Development Block Grant contract to Angela Cares, Inc., to acquire and renovate space at 512 Ocean Ave. for its operation.

The council voted to terminate a $5.64 million contract with M&M Construction Co., of Union, to build a new firehouse for Engine Co. 10 and Ladder 12 at 627 Grand St. “because the contractor failed to begin the work within the required time and failed to prosecute the work with such diligence as to insure the work’s completion within the specified period (Dec. 11, 2022).”

The council adopted a resolution honoring the life and legacy of the Rev. Fernando Colon Jr., a native of Puerto Rico who came to Jersey City at age 16, became a Pentecostal minister in 1965, was a co-founder of the Puerto Rican Association for Community Organization in Jersey City, was appointed director of the Hudson County Office of Hispanic Affairs in 1973, was elected county freeholder in 1974, was elected Jersey City councilman-at-large in 1993, and served as chairman of the Jersey City Incinerator Authority for several years. Colon died earlier this year.