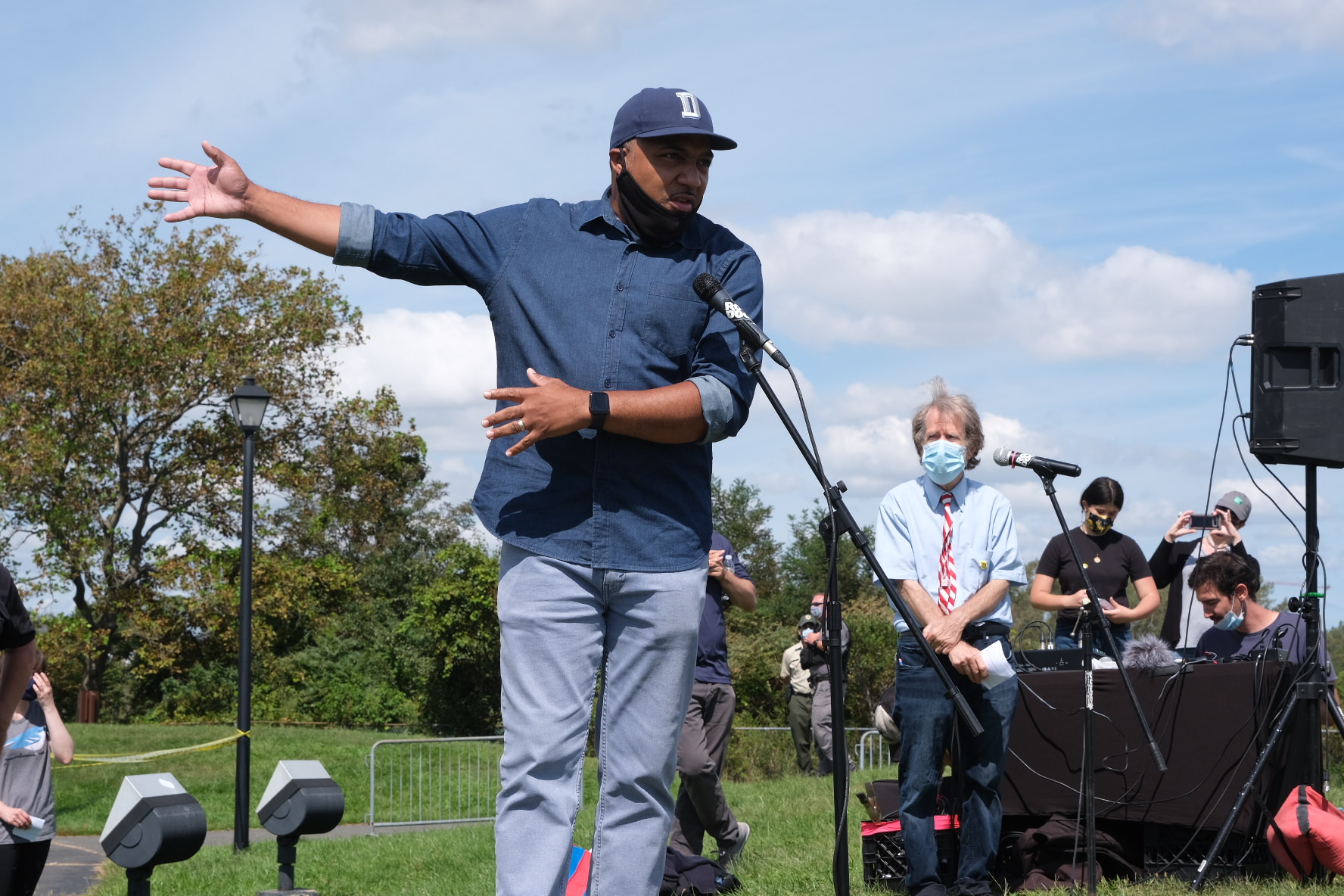 At noon today a series of local politicians and activists stood on a small hill in Liberty State Park and called on lawmakers in Trenton to pass the Liberty State Park Protection Act.  A crowd of approximately two hundred masked spectators clapped and cheered.  Not far away, a much smaller group of counter-protesters had assembled, kept at bay by park police.

The Act, sponsored by Assemblyman Raj Mukherji, would prevent the state from reviewing proposals to develop, commercialize or privatize the park, and prohibit “any concession, conveyance or lease within the 235-acre natural restoration area” in the park’s interior or on the Caven Point Peninsula.  In June, a three month budget extension contained a provision directing the Department of Environmental Protection to solicit bids for leasing parts of state parks. It was thought by some observers that this controversial provision was inserted at the behest of billionaire Paul Fireman, owner of Liberty National Golf Club. Fireman has waged a public battle to turn Caven Point, a 22-acre wildlife habitat, into three holes of the golf course.

With the early afternoon sun beating down upon him, Sam Pesin, president of Friends of Liberty State Park called on Governor Murphy to support the Act and “to once and for all protect our urban park after 44 years of overwhelming opposition to privatization.”  Pesin lay the blame squarely at Fireman’s feet.  “Fireman’s political contributions and the lies spread by his lobbyists, various bought-off surrogates, and a phony front group threaten the Act’s passage and Caven Point,” he said.

Mayor Steven Fulop spoke of the “absurdity” of having to protest in the shadow of the Statue of Liberty.  “Here we are in the same fight, every single year, whether it’s a water park or a golf course or a marina or a hotel or privatization, it’s the same thing.  It’s an absurd conversation because it’s counter to everything that [immigrants] came here believing about this country. If you had told them that anything and everything is for sale in this country, maybe they would have gotten int he boat and gone back the other way.” 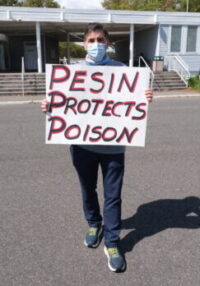 Assemblywoman and co-sponsor of the Act,  Annette Chaparo added, “For many working class families, this park is their Disneyland, their Great Adventure…I am committed to making sure that this space remains public.”

The counter demonstrators, led by local activist Bruce Alston held placards (many seemingly written with the same red and blue markers by the same hand) and took aim at Pesin and Friends of Liberty State Park.  One individual who declined to give his name and said he was there on his own held a sign with the words “Pesin Protects Poison.” As I was taking a photograph, a large man with the group approached and demanded that I stop, shouting “Do you want that camera shoved up your ass?”  En masse, the group holding the similarly written signs said they didn’t want their pictures taken.  Park police came between us and politely suggested that I stay away from them.

I later spoke with Alston, who told me, “The park should be open to active recreation in the 235 acres that are contaminated. The plan that Friends of Liberty Park are supporting would not allow for that.” Asked about the money that Trenton announced last week would be spent on remediating contamination, Alston claimed that it was not enough.  “How are they going to clean up 235 acres with $80 million dollars?” As to Caven Point Alston said, “There’s a narrative out there that Caven Point is some kind of natural habitat….it’s contaminated. The way I understand it is that he [Fireman] wanted to lease 11 acres and build it out to its natural 50 acres and take the other 39 acres and build a world-class bird sanctuary for the park.  That’s something that shouldn’t just be not considered.”  When I asked whether he had ever spoken with Fireman or his representatives, Alston replied “I’ve never had a conversation with Mr. Fireman. Do I know people who have spoken with Mr. Fireman?  Yes. But let me say this though: I’ve also had discussions with the state DEP and with Friends of Liberty State Park. So, we’re not going to go down that road now. What I’m afraid of is this.  We’re not going to paint a narrative that I’ve been bought and sold.”  He went on.  “I wrote a Facebook post one day, and what it simply said was that Black and Latino  people should be sitting at the table with all parties.” When asked who was backing his organization, Alston became agitated and asked me if I had asked Sam Pesin the same question.  Then walked away telling me to “have a nice day.”

As if to counter Alston and Fireman’s claim that Friends of Liberty State Park stands in the way of a park clean-up, Mukherji told the crowd that “there is not one line, not one word that would preclude clean up of the contamination.  We would invite it, we would welcome it, we would insist upon it.”

Said former councilman, principal of Lincoln High School, and community activist Chris Gadsden, “I found it highly offensive that this summer the conversation about this park shifted to a social justice conversation…we have got to be so focused on keeping this park a people’s park, cleaning it up, and that’s it.  We can’t be influenced by billionaires coming in here and trying to re-write the narrative.  And that’s what he’s done with his money…let’s not get sidetracked with issues of race and everything else like that.”

Freeholder Bill O’Dea offered that once the Act is passed, “We need to do what a family does when a family has a little dispute, we don’t turn around and give the keys to who wants to buy our house and leave.  We sit down at the dinner table, we talk it out and we come to a solution.”