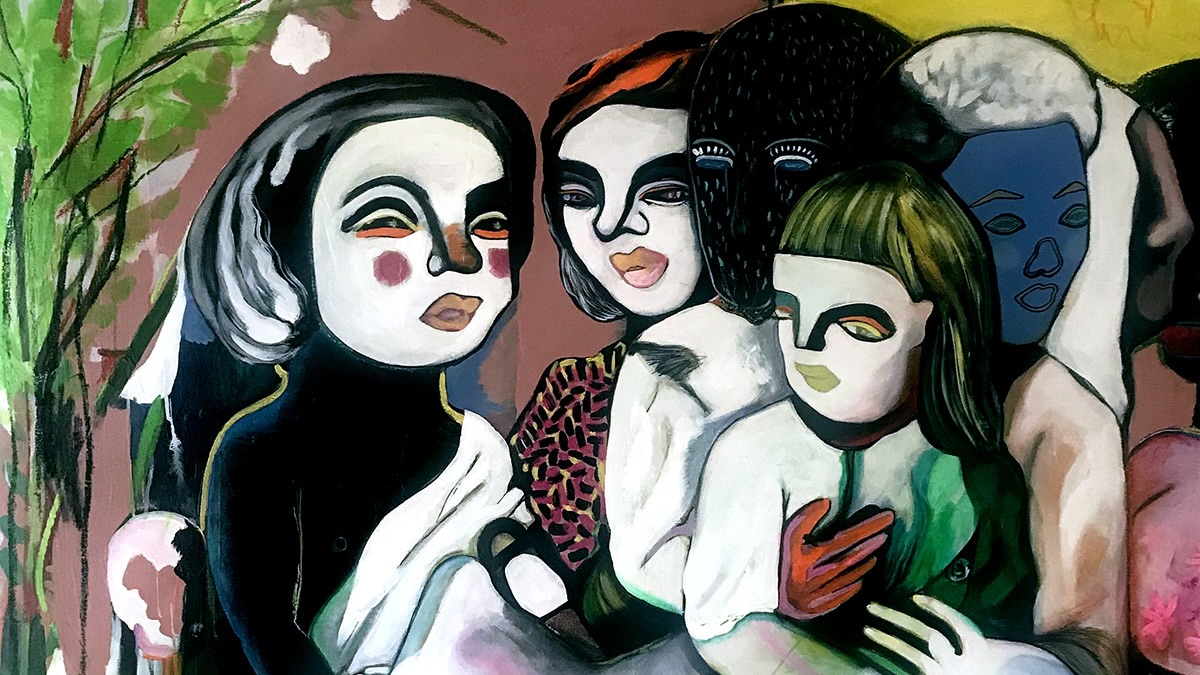 MANA Contemporary confuses people.  This is not entirely the fault of the confused.  That MANA Contemporary is the largest arts institution in Jersey City is beyond dispute: it occupies a massive, multi-level building on the western edge of town. No other gallery or arts group can boast of a campus half its size.  The operation makes its wealth evident, too.  It is hard to miss that MANA has money — greenbacks in a leaf-pile the size of which local gallery-runners could never dream of raking up for themselves.

But beyond that, the institution has struggled to define itself for Jersey City residents, many of whom don’t even know it’s there. Those who do sometimes view it as a byzantine warren of studios, or a host for esoteric events, or a giant warehouse, or a fortress, or a stylish side hustle for Moishe’s Movers, or a bank with its vaults stuffed with fine art rather than bullion.

Yet it never gets called a museum. This is peculiar.  On the basis of the permanent exhibitions alone, MANA has a better claim to museum status than many Garden State institutions that advertise themselves as museums. The light installation by Dan Flavin — a lovely labyrinth of fluorescent bulbs mingling colored rays — is exactly the sort of thing you’d expect to find across the river at the Whitney. MANA’s impressive collection of ninety Warhol silkscreens, shown in a dedicated gallery, compares favorably in intelligibility and clarity to similar Warhol exhibitions mounted in and around the East Coast over the past two decades. The side chamber of boxes by the New York Afrofuturist artist and hip-hop legend Rammellzee has the impromptu, peek-a-boo quality of a side show at PS1. Even the fonts and graphic design used by MANA are reminiscent of the MOMA.  If MANA rebranded itself as a Jersey City Contemporary Art Museum tomorrow, it wouldn’t lack for credentials.

The Warhol and Rammellzee exhibits were contributed by Ayn Foundation, the New York City organization responsible for the Arnulf Rainer Museum in Chelsea. A knockout show of Rainer’s cross-shaped paintings hung in a MANA gallery for such a long time that it began to feel like part of the plumbing.

Just as museums do, MANA tends to supplement its semi-permanent attractions with special exhibitions — and lately those special exhibitions have been both impressive and uncompromising.  “Implied Scale,” a smart, combative engagement with climate catastrophe, took over much of the first floor this summer; for those who saw it, its harsh lessons are still reverberating. “A Message from the Underground,” which opened on the 13th of November and runs for the balance of 2021, presents new work from area artists with deservedly high reputations, including MANA regular Leandro Comrie and Danielle Scott, the curator of the inaugural show at ProArts Gallery Art150. Should you like to visit the show, which was curated by Maria De Los Angeles and includes 18 MANA artists, you can schedule a visit right here.

If you’ve never been to MANA Contemporary, tomorrow would be a good time to direct yourself to 888 Newark Avenue.  It’s your final opportunity to see “Materalistic,” an imaginative, energetic, and expertly mounted textiles and fiber art show starring students, graduates, and teachers at the Parsons School of Fashion. The exhibit occupies much of the same real estate that “Implied Scale” did — which is to say that it’s big show, one with multiple galleries of wild textile fabrications, some made of sci-fi biomaterial, some fragile as ice crystals, some hanging from the high ceilings with the heft, and jolliness, of balls of provolone in a deli.  Bamboo, packing twine, kale cotton, discarded tires, substances that resemble flower petals, substances that resemble shed snakeskin: out of raw and unrefined materials, the members of the Parsons crew have created pieces that seem tactile, squeezable, occasionally wearable, and sometimes amazingly comfortable.  I’m not sure “Materialistic” is a sneak peek at the future of textiles — we should be so lucky — but it does hint at fascinating new directions for designers.  Like all looks into buzzing laboratories, it’s exciting. Even the failed experiments have an explosive flash to them.

If the MOMA mounted a show this good, posters for it would be hung on every streetlamp on Fifth Avenue.  There’d be a social media push; there’d be an old-fashioned media push; there’d be signs on top of taxis and at bus stops. They’d do what they could to insure that “Materialistic” was a hit. Even philistines would know it was in town. This is not the MANA approach. Their outstanding shows are so indifferently advertised that it feels a little perverse. The website, too, is not much help. MANA operates satellite galleries in Miami and Chicago. All the show listings are presented at once, which is great if you’re an institution trying to generate an impression of a whirlwind of arts activity happening nationwide under the MANA banner, but not so hot if you’re a gallery-goer who’d actually like to plan a visit.

And if you would like to visit, you’d best time your arrival carefully.  Part of the reason I’m advising you to check out MANA tomorrow is because if you don’t, your next good opportunity might not arrive until the first week of December.  It’s possible to arrange for a private tour of the MANA space on Thursdays and Fridays, but the public hours for the galleries are limited to a sliver of time on Saturdays: noon until 4 p.m.  Instead of expanding hours during the holidays, as many NYC-area arts institutions do for very logical reasons, MANA won’t even be open on the Saturday after Thanksgiving.

Given the amount of time and effort (and money) that has been devoted to making the institution first-class, this stinginess feels irrational. Imagine presiding over a collection of ninety terrific Warhols, hanging them like you’re expecting hundreds of viewers daily, and then limiting access to a few weekend hours, open house, and special events. It’s downright weird, and that weirdness amplifies the feeling of Mordor-like inaccessibility that MANA radiates.

It would help if someone in a decision-making position at MANA would speak clearly about the institution’s contradictions. Alas, as the Jersey City Times reported a little over a week ago, Eugene Lemay, co-founder of MANA and the most visible figure associated with the complex, was indicted by the Southern District of New York on tax charges. Moishe Mana, the art storage and real estate magnate who owns the property, has stated that Lemay is no longer involved in the day-to-day operations of MANA.  That much is clear. Everything else about the situation is opaque. We don’t know whether the indictment has impeded MANA’s latitude for action, or whether the institution itself is in trouble. Is the legal problem a fly easily swatted away, or has our local arts Titanic hit an iceberg?

MANA Contemporary exists in such a breathless state of perpetual arrival that it’s easy to forget that it has been in Jersey City for ten years. The institution owes the rest of the town an explanation — or, at the very least, some straight talk about its future.  For the sake of the local arts community, MANA must present a public face that’s friendlier and easier to read. With Lemay on leave until who knows when, they need a single, identifiable representative: someone to serve as an intermediary between the gallery and the city. They need to raise their profile, advertise their shows widely, and educate Jersey City residents about its collection and its exhibitions.

Most of all, MANA must expand visiting hours. There is simply no reason why an operation of this size and scope ought to be so parsimonious about accessibility.  When small Jersey City galleries run on shoestrings by individual proprietors are open more frequently than the big boy in town, you know there’s something wrong.

MANA’s partnership with the 14C Art Fair was a positive step. For one Saturday at least, the first floor of MANA felt like the proper museum it could be, filled with chattering guests impressed by the historic building, the hospitality, and the artwork. Many out-of-towners (and a few Jersey City people, too) were amazed that the space even existed; the most frequent comment I heard on the floor during 14C was that MANA should be better known. We agree. We believe that MANA Contemporary could be the premiere visual arts institution in the Garden State. They’ve got the room, they’ve got the pieces, they’ve got connections with dealers and galleries around the region, and they’ve got a track record of smart, well-presented special exhibitions. They also possess a rare asset widely coveted in Jersey: a huge parking lot.

I don’t write today to chastise MANA.  Their curation is excellent, and the shows on view this weekend deserve your attention. The work on long-term display there is inexhaustibly interesting.  But my occasional frustration with the institution is real, and I’m not the only arts advocate in town who thinks this way.  Even before Eugene Lemay’s arrest, it seemed to many concerned locals like MANA Contemporary was in a holding pattern — appropriate for a warehouse, certainly, but never for an arts space. Even those who appreciate the galleries often find the place chilly.  I would hate to see MANA go the way of so many other ambitious Hudson County arts institutions, including the Jersey City Museum, which sits, unused and unloved, on a corner of Montgomery Street. It deserves to be stitched into the fabric of Jersey City as firmly as the PATH Trains and the pizza places.

This is entirely attainable. They don’t even have to call it a museum if they don’t want to.  All they’ve got to do is step up their game.

Header Photo: “Te Quiero” by Leandro Comrie. From Mana’s show “A Message from the Underground.”

Jersey City Gets an A+ For LGBTQ+ Policies

Google to Invest in Local Tech Training
Scroll to top