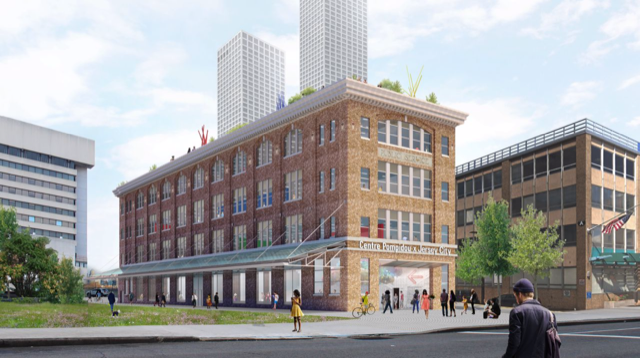 At a yearly cost of $12 million, Mayor Fulop’s planned art museum, known as Pompidou Jersey City, will be one of the largest single items in Jersey City’s budget, larger than Health and Human Services and Youth Development and Recreation combined, if approved by the city council. Yet, surprisingly to some, there’s been little pushback from local social justice and arts advocates against the massive financial commitment. From rec centers for at-risk youth to support for Jersey City based arts organizations, Pompidou Jersey City has the potential to soak up funding for a variety of social justice and arts related causes.

To some observers, the contrast between activists’ efforts last year to redirect spending towards pressing local needs following the killing of George Floyd and their near silence now as the city takes on a huge new expense that many see as an amenity for the upper middle class, seems stark.

A city council meeting in August of last year provides a case in point. During the nine-hour meeting, eighty-five public speakers signed up to demand that the body make significant cuts to the public safety budget and increase funding to the Departments of Health and Human Services and Youth Development and Recreation. Many of the speakers were affiliated with the group Solidarity Jersey City. The group also submitted a petition signed by 800 people demanding a 50 percent cut in the police department budget. Just weeks later, the group turned out a significant number of speakers to oppose moving the Quality of Life Taskforce into the Department of Public Safety.

When it comes to Pompidou Jersey City however, the group has been conspicuously silent. Solidarity Jersey City was a no-show at the June 16, city council meeting at which a memorandum of understanding to bring the museum to Jersey City was approved. Indeed, only two unaffiliated public speakers attended the meeting.

Some have found Solidarity Jersey City’s silence curious. But the group is by no means alone.

Another stakeholder, Jersey City Arts Council, has been similarly quiescent. Asked for the group’s position on a museum that could compete with local groups for corporate, foundation, and individual donations, JCAC Chair Heather Warfel wrote, “We admire the City’s endeavor to bring world-class art to Jersey City and look forward to continuing our working partnership with them, while forging one with the Pompidou leadership that will enable us to advocate for a supportive integration of our existing arts community.”

Gallery owner and Art House Productions Board President Robinson Holloway was similarly supportive, writing, “I think of all the possible options to invest in a transformative cultural anchor in Jersey City, the Pompidou might be the perfect choice.  It has global recognition and respect, and yet it’s probably the least stuffy and elitist museum in the world.”

According to the best estimates, operating Pompidou Jersey City will cost the city approximately $12 million per year, $6 million of which will be paid to Pompidou in France for access to its collection and for a variety of related services. And even with the recently announced $24 million from the state, construction is expected to cost Jersey City another $16 million.

Who are we prioritizing?

Some individuals have, nonetheless, expressed opposition to Pompidou. Said teacher-activist Kristen Zadroga-Hart, “I am 100 percent supportive of investing in the arts and cultural initiatives in Jersey City, however, not at the expense of our most vulnerable populations.” She went on, “When millions are being spent on a museum that taxpayers are funding but have no control over while a growing number of un-housed citizens sleep on the street in the shadows of the very building where the museum will go, we have to ask ourselves, who are we prioritizing?”

Ryan Moser, a member of the Hudson County Progressive Alliance, sees Pompidou in terms of white supremacy and colonialism. “It seems like this is the bow on the top of the Journal Square gentrification project that’s been ongoing. It’s designed to erase the working class immigrant population of that community and replace it with an official cultural marker of Western high art.”

But Moser doesn’t take issue with the charge that progressives have been largely quiet on this issue. “For me personally, it’s a shift of tactics and an exhaustion with the theater of calling in to the city council and having this parade of people saying ‘we don’t want you to do this’ and then at the end of the day them not listening.”

Jersey City Together, a grass roots advocacy group that focuses on “housing affordability, education, and public safety/criminal justice” did not respond to a request for comment on the Pompidou proposal.

Many activists appear to be conflicted when confronted with a choice between progressive priorities and the attraction of having a high-end amenity like an international art museum nearby. Progressive activist Marc Devins explained his own thinking. “From a high level, I’m concerned about the costs… I think the problem is that the project seems to be pretty popular. A lot of people seem pretty excited to have a destination like this in their city.”

In a statement to Jersey City Times, self-described progressive and Ward C City Council Candidate Kevin Bing called for more affordable housing and community input but stated, “I support Pompidou’s presence in Jersey City as an innovative way to bolster our arts scene.”

Similarly, progressive Ward B Council candidate Joel Brooks declined to come out flatly in opposition to the project. Instead, he lamented that “the current administration’s only concern is pro-developer and pro-gentrification policies that do little to nothing to serve the community, keep housing affordable for all or to support local artists.”

Progressive Council at Large Candidate Chris Gadsden opined, “The Pompidou could give Jersey City international exposure at the expense of hyper-gentrifying the Journal Square area.  Jersey City has to find other partners to contribute financially to the museum because we have to fix the funding crisis with our schools.”

While Ward E Councilman James Solomon has raised questions about the short five-year term of the Pompidou agreement, only Councilman-at-Large Rolando Lavarro has come out against it, objecting to the cost and calling it a “vanity” project.

Thus, there remains the question as to why there isn’t more resistance from progressives and artists given the $12 million yearly tab that may soak up funds that could be directed to Jersey City based arts and social justice initiatives. Fully $6 million of the yearly Pompidou budget will go to France and have no direct economic impact in Jersey City.

Amy Wilson is a local artist and blogger who has written about Pompidou on Substack. She teaches a class on the history of the art business at the School of Visual Arts and comes to the issue with a depth of understanding that few people in Jersey City have.

Wilson confesses that as an artist, she loves the idea. “I’m an art nerd. I’m going to be there all the time.” But ultimately, she doesn’t believe Pompidou is coming to enrich Jersey City’s homegrown art scene.  “It’s going to attract a lot of people into Jersey City who want to be near a branded cultural institution. Everyone can tell their parents, ‘hey Mom and Dad,’ I got an apartment next to the Pompidou, and they’ll be very impressed with that.”

She is troubled by the reluctance of many artists and progressives to speak out. “Privately, I’ve talked to tons of activists in Jersey City who are very angry about this plan and very much opposed to it. I don’t know why they don’t speak up.” She surmises that to oppose Pompidou is to be perceived as being against artists in general. She also senses that many locals simply haven’t caught up. “There’s a lot we don’t know.”

But there may, in her view, be something more insidious at work. Wilson, who opposed the creation of the Arts Trust Fund, thinks the arts community may have made a Faustian bargain. “I think a lot of this has to do with the art tax which has yet to be resolved.” In essence, her thinking goes, local artists and arts organizations have given up their freedom to speak out in exchange for a shot at getting funding from the city by way of an annual tax on property owners.

Photographer Duquann Sweeney agrees. “You don’t want to say anything because it may close off your opportunities to get funded.”

For Wilson, it’s a bad bargain given the modest amount of funding they’re likely to get. “The problem is what are you giving up? In the case of Jersey City arts organizations, they’re giving up their voice to get something that’s pretty close to nothing.”

“If you don’t have your freedom I don’t understand what the point of being an artist is.”

To join a discussion about this article go here.

“Walls To Smalls” at Deep Space Gallery
Scroll to top