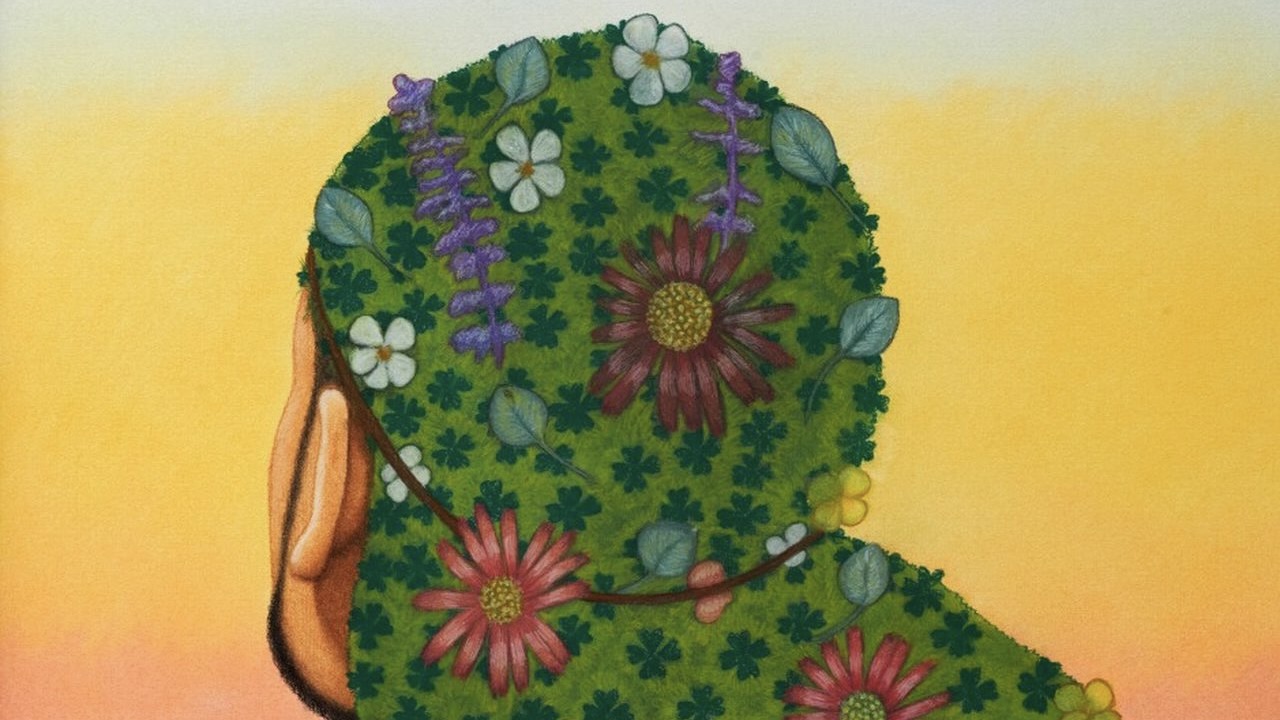 Did Piet Mondrian ever tire of painting quadrilaterals in primary colors?  What about Rothko; did he grow weary of those afterimage-like fields of melting pigment?  I ask not to be cheeky, but to point out something odd about canonical artists. They tended to develop a signature style — a particular thing they did, over and over, stacking refinement upon refinement, chasing a singular vision, and an ideal piece in their head that they were determined to realize. There’s no reason why this should be so: a painter competent enough to create a masterpiece in one style ought to have skills transferrable to another. But by mid-career, many of the titans of international art had settled into the sort of instantly recognizable compositional patterns that the less aesthetically inclined (or just the business-minded) might call a personal brand.

Most of the artists maintaining studio space on the second floor of 150 Bay Street are in mid-career, too.  A peek into their glass-walled studios reveals them to be catholic in their tastes, varied in their approaches, and commendably willing to charge down several roads at once. Yet their latest group show — one that rounds up eighteen of the best artists in the building — attempts to catch the measure of each exhibitor in the quickest strokes possible. “Signature,” curated by participating artists Deb Sinha, Cealliagh Pender, Susan Evans Grove, and Robert Cadena with assistance from Art Fair 14C director Robinson Holloway and deputy director Kristin DeAngelis, asks the 150 Gang to contribute a solitary piece that best exemplifies the artist’s work. The show, which will hang at ART150 Gallery through February 27, is a State of the Union address from 150 Bay and a crash course on a worthy crew. I’m surprised, nevertheless, that these protean figures have embraced the premise with such enthusiasm. Do they believe in the single signature piece, or the signature and proprietary style, that makes the complicated subject of their own artistry legible to viewers?  Or do they bring to “Signature” a sense of the irony that a project like this, mounted amidst the modern crack-up of authorial intention, entails?

As it turns out, it varies. Some of these artists make work that lends itself to expressions of individual identity; others, shyer types, are less inclined to insert themselves so vigorously in their canvases and sculptures. Celebrated painter Robert Policastro is, by now, so deeply identified with his images of charging, hook-toothed tigers that I’d expect his signature to be a paw-print. Josh Urso contributes some of his cracked, narrow, desk-lamp sized concrete towers that function so well as a metaphor for a fractured and fragile state of mind. Whenever I see Urso’s work, on the floor in the middle of a gallery floor, I’m always deathly afraid I’m going to knock it over, Jenga-style, which is, of course, part of the effect he’s trying to create. Susan Evans Grove takes impossibly gorgeous photographs of details of battered ship hulls, and “Changing Course” is characteristic of the entire haunting series of images, and does indeed exemplify a personal style that feels like an unbroken emotional transmission. Heloise scratches the outlines of a colorful, imperiled menagerie into a stark black background; “The Earth Cannot Wait” clears away superficial concerns and, as so many other recent works of Jersey City art have done, centers the painter’s ecological commitments. Meanwhile, Theda Sandiford parks another one of her “emotional baggage” shopping carts at the far end of the room, and tips her cap to contemporary hip-hop, as she often does, via its title: “Donda Donda Deluxe.” I’m just glad to know there’s somebody else out there who digs the new Kanye album, and not just his older, easier stuff.

Other artists seem more interested in subverting the concept of the signature style, or, perhaps, they just prefer to zig where you’d expect them to zag. Cheryl R. Riley does not provide an example of the hieroglyphic-like overpainting on torn book pages that she’s rightfully very well known for (a striking example hangs on her studio door, just around the corner from the entrance to ART150). Instead, we get a vintage typewriter from her series of household objects covered in plastic. It’s hard to tell whether Riley, who is one of the sharpest, most theorized artists in town, is making a comment on the writer’s manufacture of identity, or if she feels like this beautiful but inaccessible object represents her. The prolific Guillermo Bublik, who really deserves an extensive solo show, provides us with a lovely, subtle brown-and-yellow piece that resembles a map of an archipelago from above. It’s certainly Bublik-ish in its sense of balance and color, but it doesn’t much resemble his usual nested and brightly colored squiggles or his impressive wall-paintings. It’s even named after somebody else: Uruguayan writer Horacio Quiroga. Deb Sinha’s “City Lights BQE” feels less like a signature canvas and more like the apotheosis of the bleary, rainwashed images of nighttime streetscapes that he’s recently been making. (Sinha’s March 2022 show at the Majestic Condominiums with the like-minded Ben Fine ought to be exciting). 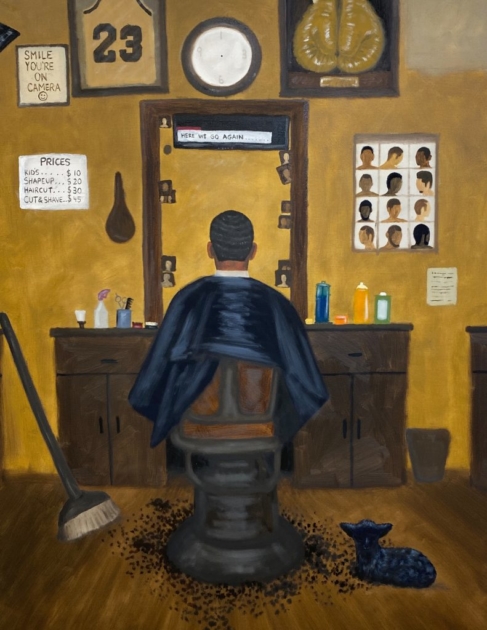 “It’s About Time” by Jonte Drew

On the far side of the Art150 Gallery is a parallel show from a young Paterson artist who is already busily refining a signature style of his own. Jonté Drew is the current Art Fair 14C MFA Artist in Residence, and at a glance, you can tell why the organizers of the Fair are enamored with him. His talent is evident, he foregrounds his personality and he’s got a sense of humor and play, and he makes the sociopolitical dimensions of his work evident. “Take A Breath,” which is curated and hung by Kristin DeAngelis along with Drew himself, is a lovely and thoroughly winning amble into innerspace, rendered in paint, pastels, and colored pencil. The person doing the escaping is either Drew himself or someone who looks like him. The character appears in most of these pieces; the bigger the work (and some are quite big), the more likely it is to contain Drew’s protagonist. And the avatar has an avatar, an externalization of the artist’s feelings of exile: a cute little black sheep who follows him around, and sometimes even gets a protective cuddle.

But what makes Jonté Drew a black sheep, anyway? For starters, he’s African American, and an urbanite, and as the three introductory pieces that greet visitors to ART150 make clear, he’s had to deal with the isolating and subtly marginalizing forces that his identity implies. The same character is transported to a green landscape dotted with trees and waterfalls; he’s bare-chested, his toes are in the grass, and his posture relaxes.  His du-rag, purple and pulled tight to his head in the bedroom painting, is festooned with flowers in the fantasy. In the show’s most remarkable image, he’s shown cross-legged and levitating, as far from the meanness of the mean streets as it’s possible to get, and fully himself. This lightness hints at the artist’s true offense to the society he inhabits: his conscientious objection to masculine imperatives. The protagonist of this story (and yes, it is a story) doesn’t want to be a bruiser or a brawler. He wants to rest in the bosom of of a soft and green world, and maybe nurture a few wayward lambs while he’s there.

The last four images of the exhibition put a needle-fine point on it. The human figures are gone, and the sheep is, too. We’re left with a quartet of flowers. These are rendered in the same colored-pencil pastels that Drew’s images of personal transcendence were. Even without the human figure depicted, the artist is present. He lets it all stand for him and his particular disposition: the softness of the pigment, the gentleness of the shading, the voluptuousness of the flower petals, the hard-won serenity, the quiet but firm rejection of standard male combativeness. The flowers are Jonté Drew, every bit as much as the man with the du-rag, and the Christ-like lost sheep is. The artist disappeared into his own work, until the signature, the irreducible mark of personality, is all you can see. He’s young, and he’s still budding, but he’s got the main idea and the skills to work a little magic. He would have fit in quite well in the neighboring show.

(Jonté Drew and Kristin DeAngelis will be at ART150 on the second floor 150 Bay Street from 1 p.m. until 3 p.m. on Saturday, January 22. Though it’s not mandatory to register, here’s an EventBrite Link. The gallery will be open, and the shows on view, on Sundays from 1 p.m. until 4 p.m. from the 23rd of January until the 27th of February.)