On the Mall in the middle of Central Park, art is everywhere. Most of it is similar: pastel prints and paintings of New York City landmarks, world-famous skyscrapers, falling leaves on Fifth Avenue, moons over Manhattan, generalized Gotham romance. If you’ve wandered through the Park, you’ve seen these pieces, and maybe you’ve even admired their brutal effectiveness. These painters and printmakers mean to sweep the viewer up in the New York story, and this they do crudely and expediently. It’s fine art (of a sort), but it’s also propaganda: univocal, meant to instill in the viewer a sense of excitement about the tourist experience. There may be many layers of paint, but there are few layers of meaning. No matter how cheesy the pictures seem, they do provide a glimpse of the city’s mercantile soul.

Two decades ago, no artist would have depicted Jersey City like this. Hudson County was resistant to glamorization. Instead, artists who engaged with the town— photographers Ed Fausty and Shandor Hassan, for instance—favored a stark realist approach so keenly and meticulously observed that it attained the alien quality of dystopic science fiction. Other artists working in the post-industrial style were determined to show Jersey City as it was—and it wasn’t always pretty. Beautiful sometimes, but never quiescent; if you came to Hudson County, you were going to encounter a landscape that would charge out to meet you, roar in your face, and leave some marks. Their Jersey City had teeth.

This is not the Jersey City that Ricardo Roig presents in “Local Color.” The show, which will be on view at the Hamilton Square Condominiums (232 Pavonia Ave. at Hamilton Square Park) through April 24, features colorful screen-printed images of a Jersey City that feels becalmed, tamed, and ready to be sold to outsiders. The exhibition lacks the explosiveness and emotional intensity of curator Kristin DeAngelis’s last show in the Hamilton Square atrium. But it does have many compensatory charms, including its user-friendliness and genuine eagerness to please. It’s hard to imagine anything more accessible than a show of beautiful prints of places and sights that residents see every day. “Local Color” presents Roig as both a balladeer and a booster, a genial Downtowner with a pleasant vision of Jersey City that dovetails neatly with the city’s recent commitment to destination marketing. 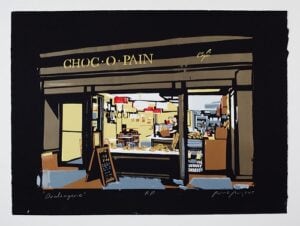 Ricardo Roig’s singular technique—his sharp-cut angles, his striking sense of color, his balance, and his knack for visual storytelling—places him miles beyond the picture hawkers in Central Park. Yet in tone, mood, and subject matter, he’s up to a similar thing. The artist army on the Mall anchors its myth-making in the city’s immediately observable landscape—its buildings and street scenes, its businesses and its marks of enterprise—and the upbeat rhythms of its architecture. We’ve got nothing as recognizable as the Empire State Building, but we have our visual symbols, too, and Roig rounds them up and makes them sing: the Colgate Clock, the gazebo at Hamilton Park, the blocky blue G of the Grove Street PATH Station, the Newark Avenue pedestrian mall. He’s drawn to bars and restaurants, and he gives us idyllic looks at Choc-o-Pain, the interior of the White Star, the umbrella-covered plaza outside Rumba Cubana, the yellow insignia of the strangely uncrushable Golden Cicada. Jersey City, this show tells us, is a place of constant commerce, too—maybe not as inexhaustible as our neighbor across the Hudson but bustling along nevertheless, committed to enterprise, on the rise with its shoes shined.

These prints give Roig an opportunity to demonstrate one of his talents: He’s an ace at representing electric light. The glow behind the windows of the Choc-o-Pain is croissant-warm; even better is the unearthly shimmer of the reflections of the tall buildings on the Hudson. The strongest print in a show with many good ones isn’t local color at all, it’s a nighttime still of the venerable and unglamorous Long Island Bar on Atlantic Avenue in Brooklyn. The dive’s hot-pink neon signs dust the sidewalk with rouge.

How does Roig achieve these high-contrast effects? Most likely, it’s residue of the unusual printmaking process he’s developed, one in which he applies paint to the canvases through stencils that are cut, poked, and pared into shape with a knife. Since each color requires its own screen, a Roig print is made up of a lattice of interlocking pigments: stenciled patterns that come together to form a familiar image. The tonal blurring that this technique produces can generate some hallucinatory effects. Human figures under the strings of lights on the Newark Avenue pedestrian plaza, for instance, really do seem to be slipping into the shadows. Other images, like an impossibly gentle rendering of the front of a commuter train pulling into Grove Street Station, possess the hushed, muted mystique of Nishiki-e woodblock prints.

Unusually for a modern landscape artist, Ricardo Roig is also very good at capturing human bodies in action. The patrons he places at the White Star are all discernible individuals, some content, others a little impudent; they might even be people you recognize. In one striking print, a couple rides the Grove Street Path escalator to street level. The man stares straight ahead, but the woman looks backward, and ambivalence at her arrival is inscribed in her body language. This is a rare equivocal moment in Roig’s work, a passing minor chord in an otherwise concordant symphony, and it hints that his embrace of Jersey City might not be as total as it seems.

Other pieces are so relentlessly positive that they could have been commissioned by a tourism council. The most awkward of these are ironically the two biggest and busiest in the show: a pair of works that combine Roig’s usual screen-printing techniques with elements of paper collage. These aren’t as assured or balanced as the smaller canvases; more problematically, they’re overstuffed with separate images meant to suggest an appealing whirlwind of urban activity. Despite Roig’s enthusiasm, they’re as impersonal as the murals that have turned areas of Jersey City into a garish open-air cartoon. Ironically, some of the most immersive pieces in the show are the tiniest: fragments and “fresh cuts” that are tight, focused, non-representational, and full of lively personality. They neither lionize nor criticize. They simply allow Roig’s considerable skills to speak for themselves.

From George Inness to William Carlos Williams to the Boss, local pride has always been a powerful motivator for New Jersey artists. The Garden State isn’t always an easy place to love, but it does elicit protective feelings. Ricardo Roig clearly adores Hudson County, and his eagerness to share what he’s discovered here is apparent in every stencil he slices. He’s covered the obvious stuff—the landmarks everybody knows, the visitor attractions, and the well-trafficked streets that everybody treads. This talented and ambitious artist can afford to cut a little deeper.

Upgrades to Jersey City Parks to Begin This Spring