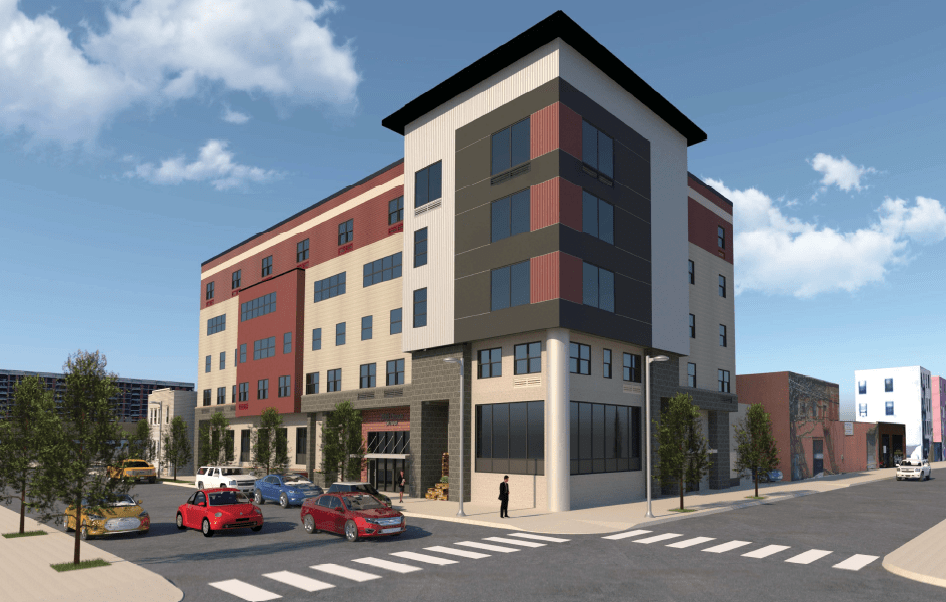 Some time within the next three months, the Archdiocese of Newark, with help from a developer-partner, will begin construction of the new St. Lucy’s Emergency Shelter in Jersey City, replacing the existing building with a brand new facility.

St. Lucy’s, which is run by Catholic Charities, is the only homeless shelter in the city and the largest in Hudson County.

Catholic Charities, which has leased the Grove Street property from the Archdiocese since 1986, houses 120 single men and women in the former parish school and provides transitional housing for people with AIDS in the old rectory. Across the street in the former parish parking lot are five affordable housing units.

But within the next few years, the landscape of the site, which lies just a few blocks from the Holland Tunnel encompassing the west side of Grove between 15th and 16th streets, will be changing.

On Aug. 11, the Jersey City Planning Board granted site plan approval for Far Hills, NJ developer 15th and Grove JC LLC to demolish much of the interior of the St. Lucy’s complex while preserving the facades of those structures and incorporating them into the design of a new 23-story tower with 444 market-rate units, retail space, and a garage. The developer will also put up a new five-story shelter across the street.

The City Council voted in February 2019 to bump up the allowable residential density for the site in return for the developer’s providing a “public benefit” with the shelter.

The 57,000 square foot shelter building will go up first and open in the second half of 2022. It will accommodate up to 150 homeless individuals spread over two floors, five 3-bedroom units for homeless families on the second floor, 14 units reserved as transitional housing for men with AIDS on the third floor, and 15 permanent affordable housing studios on the top floor.

During construction, the existing St. Lucy’s affordable housing mini complex of five townhouses will be torn down, and the occupants of those buildings will be relocated to other apartments pending completion of the new shelter. Those occupants will be given first priority to relocate to the new building.

John Westervelt, chief executive officer for Catholic Charities, said the need for homeless services has grown, and the hope is that the new building can keep pace with the demand for that service in the area.

In September 2015, the Archdiocese approved an agreement between Catholic Charities, Jersey City, and 619 Grove St. Corp., an LLC formed by the developer, for the exchange of property and subsequent development rights, pending zoning, historic preservation, and planning board approvals, which came this summer.

The developer’s project, which will take up more than 500,000 square feet of space, will offer 129 studios, 241 one-bedrooms, 70 two-bedrooms, and four three-bedrooms spread over 23 residential stories. There will also be a 251-space parking garage and 5,600 square feet of commercial space.

Specifications for the project called for no deviations from the Jersey Avenue Light Rail Redevelopment Plan, which sets the design parameters for the site. Landscaping waivers, which the developer sought due to “existing site restraints,” were granted.

Construction of the mixed -use project is expected to be finished by sometime in 2024.

During the city planning board hearing, the developer cited a structural engineer’s report on the condition of the St. Lucy’s complex which, the report said, has deteriorated “as a result of deferred maintenance since the de-consecration of the church [in 1986]….”

How Rosh Hashanah Celebrations are Adapting in the Age of Coronavirus