Jersey City’s City Council met virtually Wednesday night to vote on the proposed rent freeze spurred by Covid-19 and on installing 5G utility poles to greatly increase internet speed. They also considered the process for filling the Ward D council spot made vacant by the untimely death of Councilman Michael Yun, among other matters.

At the April 15 council meeting, Ward E Councilman James Solomon suggested two modifications to the first reading of a proposed ordinance to freeze rent and ban late payment penalties on all units subject to rent control: That the protections apply to all renters in Jersey City and that they be triggered by any future public health emergency, not just by the present pandemic. These modifications were still being debated at the council’s caucus meeting this past Monday night. Councilman Boggiano argued that buildings with fewer than five units should be exempt from the rent provisions. He also said the ordinance should have a statutory deadline.

At this past Wednesday’s council meeting, a compromised was reached on both matters. Members agreed to exempt from the ordinance properties with fewer than five rental units so long as the landlord lives at the address as well (in consideration of Jersey City residents liable to pay property taxes by May 1); members also agreed to a finite term for the ordinance: August 1 (saying the law could be extended if a continuation of the present state of emergency were declared).

At the May 6 council meeting, the original ordinance will be voted down; the revised ordinance to be voted on.

5G technology dramatically increases the speed and coverage of wireless networks, but it is saddled with the controversial allegation that it is dangerous to one’s health.

“This has been a concern for residents in Ward A,” Councilwoman Ridley said. “I’m currently working with the law department to put regulations on communications, and I’m looking at ordinances from other towns. Whether you believe 5G is dangerous, regardless of that, I am going to vote no.”

Councilman Boggiano agreed with Councilwoman Ridley whereas Councilman Daniel Rivera said he wouldn’t vote on a second reading without further information from petitioner Cross River Fiber.  The council will ask a representative from the company to supply additional information at the next Council meeting.

“We all have concerns,” Council President Joyce E. Watterman said. “If those needs are not met, this will not pass.”

Cross River Fibers LLC would be doing the work on behalf of its client AT&T. The term of the agreement authorizing its use of the rights of way use would be 20 years. Cross River Fiber LLC would pay the city $750 for every pole it installed.

Business Administrator Brian Platt said he will ask the petitioner to attend the May 6 council meeting. He also said the city supports the 5G utility pole installations and upgrades.

“We’re not investing or partnering,” Platt said. “I believe it’s good to bring new technology to the city when we can.”

At the Monday night caucus meeting, the council withdrew a resolution to appoint a replacement for Ward D Councilman Michael C. Yun, who passed away April 6 from Covid-19 complications. The council has until May 6 to make an appointment or continue with an eight-member council until the general election on Nov 3, 2020.

Councilman Boggiano said that Michael Yun would want Sean Connors to be his replacement. Councilman Lavarro demurred, noting that although Connors is a good candidate, there are others interested in the position who are “very capable” of filling Councilman Yun’s shoes, including Cynthia Hadjiyannis, an attorney who ran Councilman Yun’s 2013 campaign.

“I think in fairness we should hear out the other candidates,” Councilman Lavarro said. “I spoke to Michael Yun’s son, Benjamin. He suggested his father would have wanted transparency in the process. I remember Michael advocated for that.” 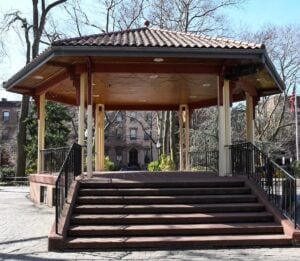 A resolution authorizing the award of a contract for $39,600 to Gene’s Landscaping Inc. for “fertilizing, seeding and aeration throughout various Jersey City Parks” came under scrutiny. Jersey City resident Jeanne Daly phoned in during the public comments part of the meeting and said she saw the landscaper in her neighborhood with New York State license plates. She  asked the Council to veto the resolution and award the contract to a Jersey City landscaper.

“There’s no reason that Jersey City cannot hire a local company for this job,” Daley said. “This is a non-essential business. There’s nobody in the park, and an investment of over $40,000 (sic) at this point in time is extravagant and a big mistake. We need someone in Hudson County, and we need to hire local.”

Council at Large Rolando R. Lavarro, Jr., noted only two quotes were solicited for the contract and that Gene’s Landscaping had been the lower. He said it might be prudent to take a second look and maybe a formal solicitation.

“At this time, we’re not using the parks,” Councilman Lavarro said. “We don’t want our parks to suffer, but we want to make a good faith effort to find local contractors.”

Councilman Robinson agreed that the city should “take care of our own.” He also said that it might take too long to solicit another bid given that constituents expect their local parks to be maintained at all times.

“I think we have to do a better job to make sure we are looking out for Jersey City up front,” Councilman Robinson said. “We missed an opportunity here, but I don’t want to miss the opportunity to have our parks cared for.”

The council approved the resolution 5-3 with Councilmen James Solomon, Lavarro and Boggiano dissenting.

The next virtual council meeting will be held Wed, May 6, at 6 pm.

To view the virtual council meeting, go to: cityofjerseycity.gov/vcm

Jersey City Will Begin a Phased Reopening of Parks on Monday, 4/27