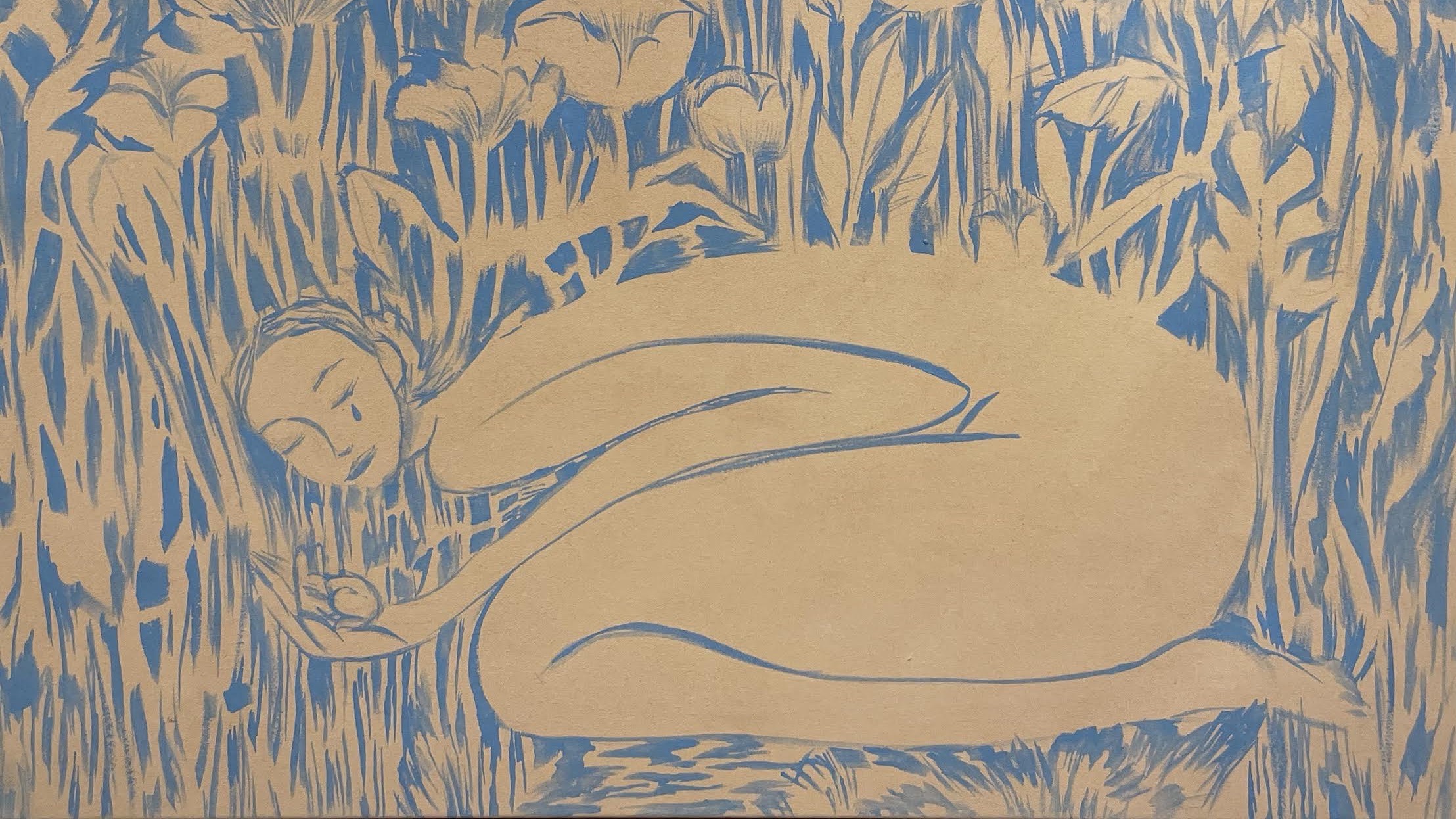 Ours is a garden state, and the garden is in peril. Those of us who live in Jersey City, flood-prone, weatherbeaten, and greenspace-challenged as it is, know this as well as anybody could. The world ecological crisis has evident local dimensions, and New Jersey artists and arts institutions have, in the past twenty-four months, responded to the alarm. Ocean pollution is the explicit subject of Amanda Thackray’s “Surface Tension,” now up at the Lemmerman Gallery; Cheryl Gross’s recent Eonta Space presentation of drawings of threatened animals was similarly themed, and similarly urgent. MANA Contemporary rang all the bells at the station in “Confronting the Enormity of Climate Change,” a group show that included a mural-sized illustration of a trash heap and a graphic filmed depiction of the California fires.

“Bodies of Water” is not that kind of show. It does not shout. It hums like a bumblebee on a blooming vine. But this solo exhibition of new paintings on canvas and works on paper by Rebecca N. Johnson, on view at Deep Space Gallery (77 Cornelison Ave.) through October 31, feels like a gentler response to the same ferocious anxieties. The world Johnson depicts is hushed and bejeweled with flowers, thick with vegetation, dripping with liquid, populated by women who appear to be outgrowths of the wilderness. Their bodies are festooned with leaves and twigs, their expressions inward and inscrutable, their surroundings honeyed and lush. Many of them are captured in the act of caring for an animal, or a plant, or just themselves: they’ve got a hedgehog handful, or they crouch under a giant blossom that covers their heads like a parasol. And we know, without needing to ask the artist, that this act of caring — for nature, for the fluid and growing, for the forgotten and the feminine — is good and proper, and required of all of us. (Just in case you miss the point, she’s given us a nudge: “Water the Flowers,” one of the drawings recommends.)

The exhibit is twee. The smaller the images get — and some are barely bigger than a playing card — the more desperately adorable they become. Yet “Bodies of Water” is saved from preciousness by the sense of looming danger that these images radiate. Johnson’s subjects never look uncomfortable, but they assume softly defensive positions: bodies protectively folded, kneeling or on haunches, shoulders and elbows tucked in, shielding whatever they’ve got in their hands. Sometimes the frame is made a little too tight for them; sometimes the vegetation stretches from corner to corner. In “Where the Flowers Grow,” one of her larger canvases, a woman with her eyes closed crouches in a thicket that envelops her nude body like a great green blanket. Her long hair, tied in a topknot, merges with the foliage behind her, and a vine wraps possessively around her face. Guarded like a secret, a starburst in vibrant yellow blossoms from her palm. In “Flowers for Friends,” a striking work on paper, another seated woman wraps her arms around her knees and a stem as thick as her ankle that could be growing from her chest. Two giant flowers slither around her in curves that echo the bend of her shoulders and spit colorful petals downward in forked-tongue shapes. One of these floral serpents emits a single drop of blood.

The materials used by Johnson give these effects extra resonance. She juxtaposes fields of opaque flashe paint, even and impassive, with pastels and acrylic ink that swirls, ebbs, and murmurs like watercolors do. Her women, as in “Ossages,” are often dissipating, fading to white, as bodies of water do. Her plants are solid. Many of the figures on the canvases are rendered in lime wash, which is more often used to tint the slats of fences and the walls of cottages in the woods. It all feels minerally, summoned from the earth, as if she’s painting with soil and sand and river-eddies.

Rebecca N. Johnson also contributed work to “Cat Aesthetics,” the feline-themed group show that Deep Space mounted earlier this year. Her “Nocturnal Creatures,” an image of a sad-faced woman merging under the moon with a trio of dissolving black cats, was a humble highlight of that show. It’s therefore fitting that Deep Space has gifted Johnson, one of its quietest star performers, with its first solo exhibition in over a year. “Bodies of Water” plays like a feminine counterpoint to the exciting but thoroughly macho “Walls to Smalls II” — a reminder that acts of resistance need not always be loud. Sometimes they can arrive like a spring breeze, or a whisper, or a soft but unyielding embrace.

Op Ed: On Vaccines it’s Better to Convince than Attack