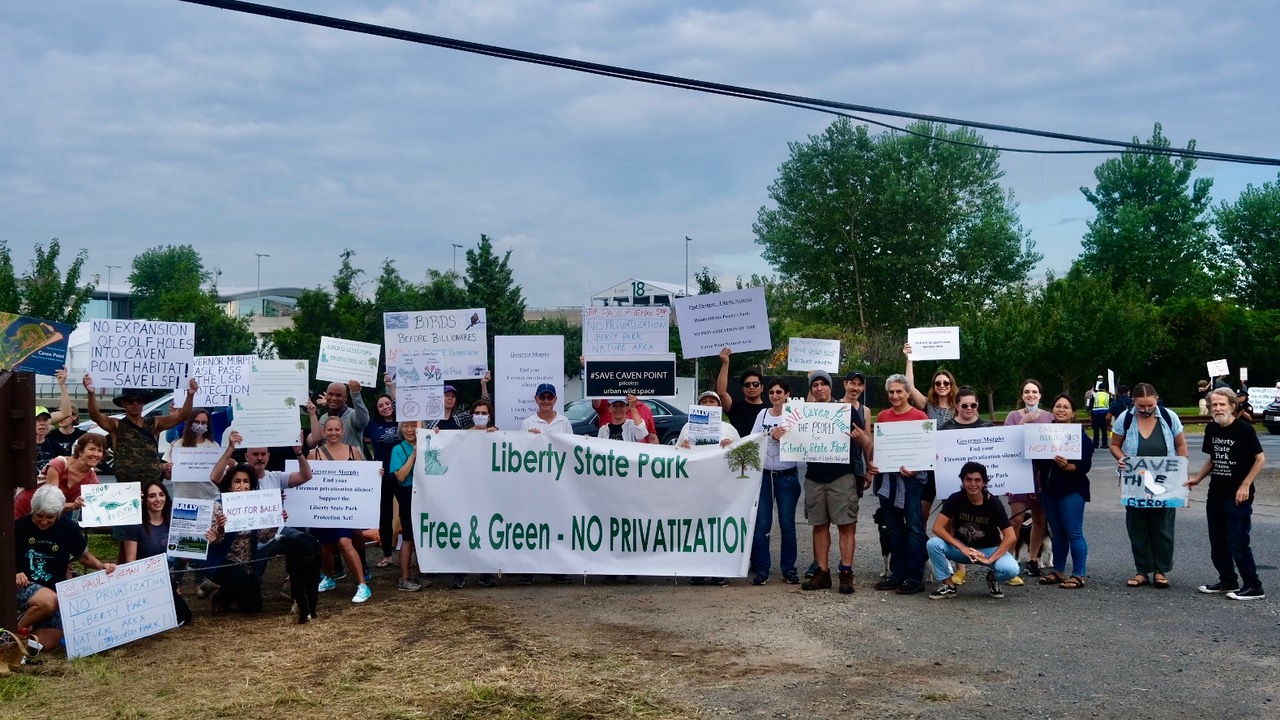 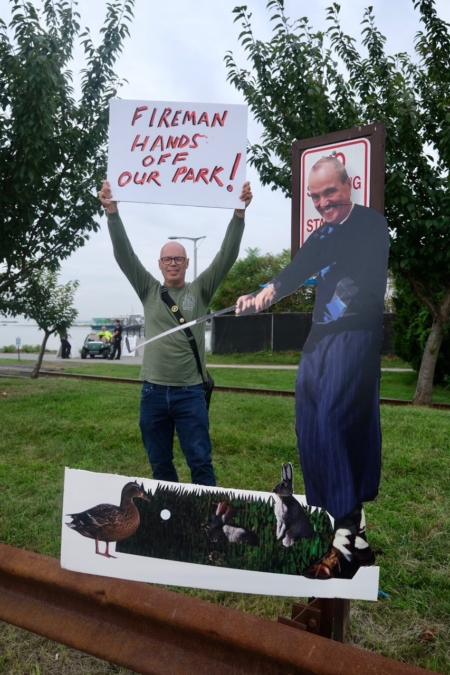 Armed with placards and fueled with donuts and coffee, a perky group of protesters gathered early this morning on Morris Pesin Drive across from Liberty National Golf Course. A contingent of Jersey City police officers stood nearby directing traffic as polo shirted fans of the Northern Trust golf tournament made their way to the entrance gate across the street.

“We are here this morning to protest against billionaire Paul Fireman’s push to privatize and destroy the Liberty State Park Caven Point natural area to relocate eye-candy golf holes for his multi-millionaire members. He’s been working with his lobbyists and his phony front group and other surrogates to attack the Protection Act,” said Sam Pesin, president of Friends of Liberty State Park.

For several years, Fireman has been engaged in an effort to convert Caven Point, a 21-acre piece of land that park advocates and environmentalists consider an important nesting area for wildlife, into three holes for Liberty National Golf Club, which he owns.

The Liberty State Park Protection Act, which has been under consideration by the state legislature since January 2019, would protect the park, and specifically Caven Point, from privatization and commercial development. Pesin and FOLSP have spearheaded a drive to have the Act passed and made into law.

The debate over Caven Point reached the boiling point last year when Fireman enlisted the help of two local activists, Arnold Stovell and Bruce Alston, to argue that “minority communities had been systematically shut out of the decision-making process on Liberty State Park.” 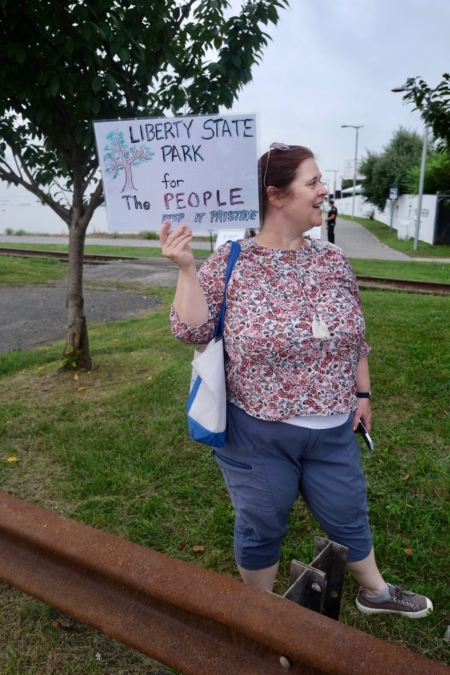 FOLSP pushed back. Daoud David Williams, 77, a lifetime resident of Jersey City, army veteran, and member of the NAACP said at the time,“It is disgusting that they want to racialize this. They are co-opting Black Lives Matter. They want to pretend that they are representative of the community.”

Dana Patton arrived at the protest site at 5:30 am. Seemingly unfazed by the early hour and asked about Fireman’s offer to open a golf school for disadvantaged urban youth, she responded, “Fireman has offered to do a lot of things ever since this golf course opened and he’s done none of them. He’s one of the top 100 land owners in the United States. We don’t have to give him natural habitat in order to do that.”

She went on. “It’s disgusting that we have not passed the legislation to permanently protect this park.”

According to Justin Hopkins, an attorney with an undergraduate degree in environmental science, “The runoff from golf courses is horrifically toxic because of the high nitrogen content and pesticides they use. Oysters used to be so common that you could pick them out of the water with your hands, and they’ve been extinct in the New York Bay because of things like this.”

Bike JC President Patrick Conlon said, “Cycling is something that happens and is promoted through open space. Liberty State Park is the greatest open space that we have in this region and we want to make sure that they’re protected.”

In July 2020, Fireman issued a statement that he was “halting any efforts to pursue a public-private partnership at Caven Point.”

But Pesin isn’t leaving anything to chance. He said he hoped the protest would send “a strong message to Governor Murphy that he should say ‘no’ to his friend Paul Fireman.” Murphy, he said, “should take a public stand in support of the Act.”