Whether you’re a Democrat or a Republican, the outcome of tomorrow’s election is already a given.  Most of the races are uncontested. 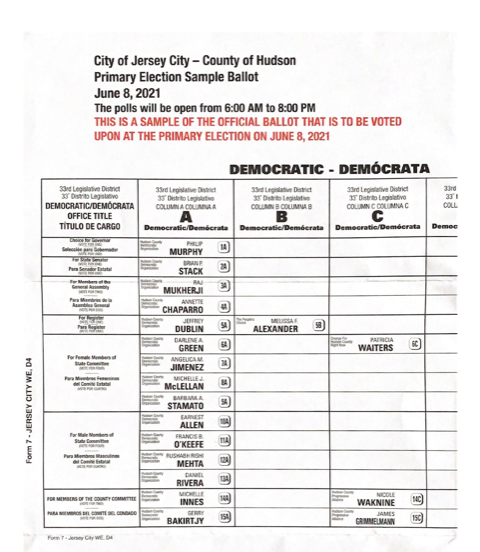 While committee seats have often been seen as largely ceremonial, committee people do, in fact, have the right to view the municipal party financial records, review party bylaws, vote to approve bylaws, elect party leadership, propose amendments, and endorse candidates.

The county committee has often become a battleground between warring politicians. In 2018, Mayor Steven Fulop and Union City Mayor Brian Stack waged an ultimately unsuccessful campaign in the committee with the goal of ousting County Executive Thomas DeGise.

One Alliance candidate, James Grimmelmann, who is running tomorrow for a seat in Downtown in D4, explained his reasons for entering the race. “I really like the work that James Solomon has been doing and one way to support him is to run for the committee.” He believes Solomon is committed to “making this a livable and fair city for everyone.”

On tomorrow’s ballot, party endorsed candidates will be listed under Column A headed up by Governor Phil Murphy.  This preferred position — also called “the line” — is currently being challenged in federal court as conferring an unfair advantage on independent candidates.

According to attorney Brett Pugach, who along with co-counsel Yael Bromberg, brought the lawsuit, “Getting on the county line has become virtually synonymous with winning the election.” Independent candidates like Grimmelman, on the other hand, will be relegated to what has been called “ballot Siberia,” in Column C.

Whatever one’s preference, information on voting can be found here.

Editorial: The Immoral Price of Pompidou
Scroll to top
Subscribe to Our Newsletter