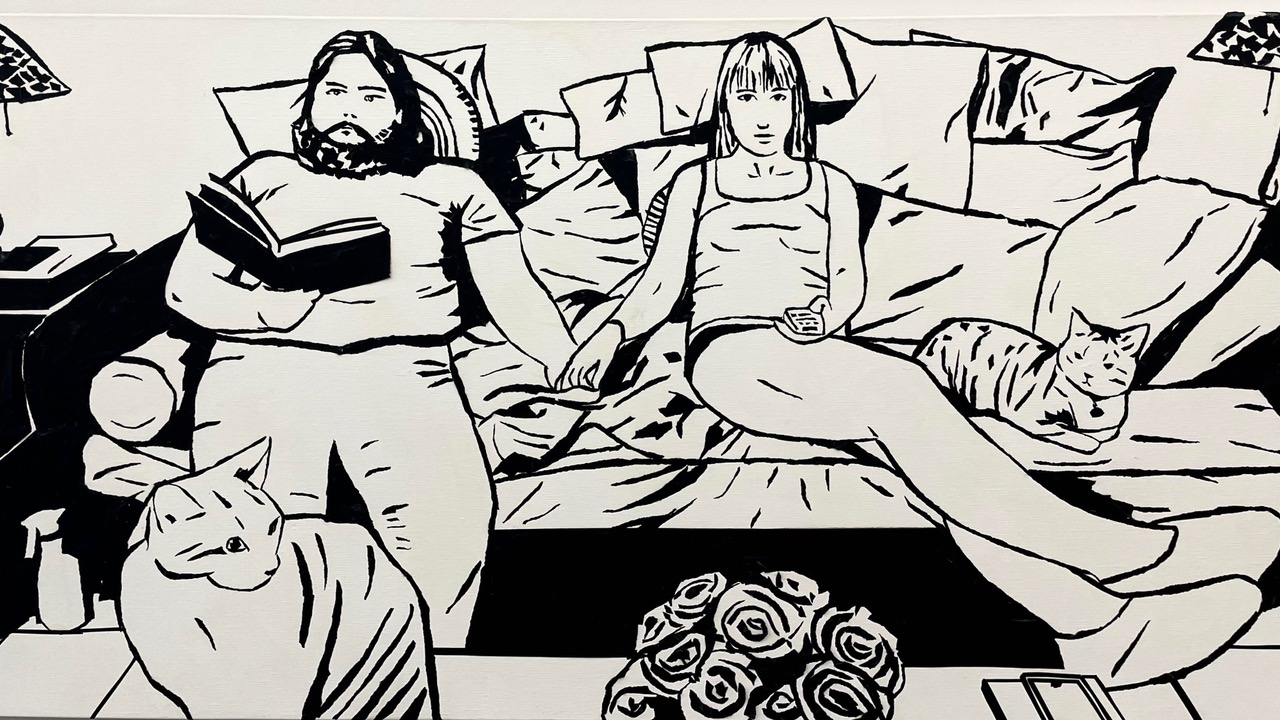 From a distance, a strip of torn masking tape on canvas resembles a stroke from a paintbrush.  It has the same organic quality and uniformity of tone. It even bunches up in the way that thick paint can. A flat piece of tape can feel intentional in the same manner that a well-guided line of paint does: a deliberate connection of imaginary points made by an artist who knows just where she’s going.

Intention and motivation have never been a problem for Kayt Hester. Her works speak both univocally and unequivocally, and always seem to be exactly what she intends them to be. Hester makes paintings without paint (usually). Instead, she spins her attractive images from webs of black masking tape. That tape nests in thick, suggestive bunches, or it streaks off, Basquiat-like, from visual center-points, or it is smoothed into flat obsidian fields that feel more absorptive than reflective. Most of all, it coheres. It tethers together humans and objects, and humans and other humans. In its directness, its muscularity, its accessibility, and absolute faith in the expressive power of the line, Hester’s work is not dissimilar to that of another local artist — Norm Kirby, whose fabric designs on chain link fences give Jersey City so much of its quirky character.

Nevertheless, Hester is no minimalist. And unlike Dylan Egon, whose black and white paintings her works superficially resemble, she doesn’t try to get over by tickling the unconscious with provocative symbolism. Instead, her works are imbued with a kind of stark, everyday realism — they make an immediate impression, but they also reward close study through their attention to detail and close observation. “Power Pop Trio Reunion,” a show that will hang in the pretty Firmament Gallery at the Nimbus Arts Center (329 Warren St.) matches Kayt Hester’s tape paintings with works from two other artists who don’t play coy or skimp on significance: the incisive Joe Waks and the excitable, combustible Robert Piersanti. There may or may not be better shows mounted in Jersey City this spring and summer. But you’d have a hard time finding one that’s as much fun.

As the title of the show suggests, Firmament curator Tina Maneca has reunited Hester, Waks, and Piersanti for another go-round of what has been an effective and successful aesthetic partnership.  The three artists presented together at LITM (in 2017) and at the PRIME Gallery (in 2019), and their styles really do go together like the flavors of Neapolitan ice cream. Waks is the unabashed social commentator and the one with the biggest and sharpest burr in his saddle; his grim, funny oil and mixed media canvases throw together old cigarette ads, outdated corporate logos, images of nuclear power plants, flag-draped caskets, religious iconography, and plenty of snarky text rendered in vintage magazine fonts. In order to miss his critique, you’d have to have slept through the entirety of American history. Piersanti is the purest pop artist of the trio and the most ostentatious in his use of color, saturating circular, rectangular, and triangular canvases with washes of candy-counter pink, ectoplasm green, and sci-fi purple. His paintings are populated by B-movie astronauts, decal-style snakes, businessmen with x-ray spex, Supermen and superwomen, and a comic reader devouring an issue of Weird Science with an image of the Firmament Gallery on the cover. If you’re familiar with early-’60s kitsch culture, you certainly know the drill.  But Piersanti often pushes past the merely iconographic: his portrait of Sandy Koufax, complete with Los Angeles Dodgers cap, captures some of the uncommon dignity of the athlete, and, perhaps, the dignity of classic baseball cards, too.

It’s fair to say that all of this stuff is deeply indebted to Andy Warhol — but so is everything else. It’s better to understand Waks and Piersanti as Jersey wiseguys, operating in a storytelling tradition that uses the trash of the past as a shield against the brutality of the present. What Hester shares with these artists is a refusal to, as Chuck D might put it, rhyme for the sake of riddling.  This is some of the most forthright artwork you’ll see in a gallery this year. You will not mistake Hester’s fox for anything but a fox, or the masking-tape image, as gripping and true-to-life as a candid photograph, of a man and woman on the sofa as anything other than a portrait of the artist’s living room. There, she provides us a vintage lamp, a spray-bottle on the floor, and ennui creeping in along the edges. The forceful tape-drawing of a stag is Hester in a nutshell: just decorative enough (check the red blossoms on the antlers!) to sweeten the emotional intensity of the animal’s stare, and exactly as detailed as it needs to be to make its stag-ness manifest at any distance. As every power pop musician knows, legibility is a generous act. It takes a courageous artist to give it to you as straight as this.

The Firmament Gallery has also been generous with its hours. Basically, it’s open whenever Nimbus is, which means that after three o’ clock on any given afternoon but Sunday, you can arrange to swing by to check out the paintings — whether or not you stick around for the dance shows that are the company’s bread and butter. Tina Maneca has done a commendable job fitting the Trio into the space, too.  She gives you plenty Waks upon ascent up the stairs, wagging fingers at every step, and then she lets Piersanti howl at you from the western wall. She does so secure in the knowledge that you’ll fall safely into the net of Kayt Hester’s images, all tangled up in tape, stimulated, and spoken to.

(“Power Pop Trio Reunion” is on view at Firmament Gallery until June 12.)

The Conflicting Emotions Evoked by Mother’s Day
Scroll to top