Since returning from winter break Monday, North Plainfield students have attended school on a half-day schedule. Steven Rudyz’s son — who tested positive for COVID-19 and is quarantining — gets one hour of online schooling daily.

Arlene Chuisano has three children in Sayreville schools, and kept her two sons home after they tested positive. But the school said her vaccinated teen must still attend classes while she isn’t showing symptoms, even though they all live in the same home.

After Jaquetta Baker received a Sunday night text alerting parents all Elizabeth schools would be virtual until Jan. 18, she stressed over whether to call out from work or juggle her job while making sure her kindergartener is focused.

“The communication is so last minute, which is very inconvenient for me as a single parent,” said Baker, who has a 5-year-old named Aubrey. “I feel like schools should be working to keep them in person, because as a working parent, I can’t sit and interact all day. It’s bogus.”

Baker is among countless parents across New Jersey agonizing over balancing fears of their children getting sick and wanting their children to be properly educated. The state’s rising cases of COVID-19 have reignited the contentious debate over whether kids should learn virtually, or whether the value of in-person education is greater than the risk of children and teachers catching the virus. 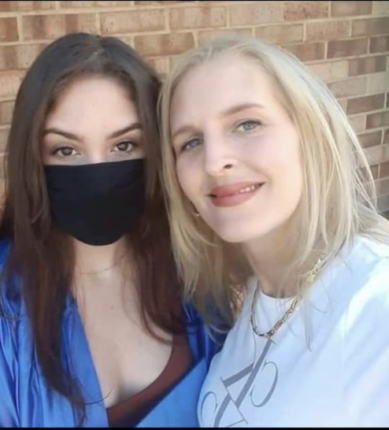 Jennifer Gawronski and her daughter, Angelica.

“It’s a catch-22,” said Jennifer Gawronski, whose 14-year-old daughter attends high school in Elizabeth. “I don’t know what to do. I reach out to parents, we speak, there’s a crisis hotline. It’s hard to be their cheerleader but you want to cheer yourself up, and you never know if what you’re doing is right.”

New Jersey eliminated the option of remote-learning for the 2021-2022 school year after the coronavirus pandemic had students out of schools for months. But districts with high infection rates are able to temporarily return to remote learning.

More than 100 of the state’s 600 public school districts have switched to some form of remote learning, including Newark, Jersey City, Camden, New Brunswick, South Orange-Maplewood, and Lower Cape May Regional.

The Department of Education did not respond to an email seeking comment.

When asked in March 2021 whether parents would have the option for remote learning, Gov. Phil Murphy said he expects “Monday through Friday, in-person, every school, every district. Obviously, if the world goes sideways, we have to revisit that. But as of this sitting, the answer is no.” He’s expressed concerns over how remote learning hurts students, particularly low-income families.

Rudyz saw how remote learning affected his children, who “were miserable” at the computer and saw their grades drop. His daughter with a learning disability wasn’t getting any extra help, and the ESL students in his town were struggling, too. Nineteen percent of the district’s students are English learners.

“I work remote, so I couldn’t help that much. It’s really challenging, so I’m like, ‘Go to school!’ It’s the best place for them,” he said. “They’ve put in safeguards and they’re being careful. And everybody’s getting this variant, vaxed or not, so it’s almost silly not to go to school.”

The night before his kids were set to return from winter break, his son tested positive for the virus. Now that they’re all quarantining, he’s thankful the district took steps for a temporary, part-time schedule. He supports sending his kids in person, largely due to lack of child care and the impact of remote learning, but said a more hybrid schedule would give parents different options.

North Plainfield Schools Superintendent Michelle Aquino told parents on Jan. 3 the remainder of the week would be on a half-day schedule, largely due to staffing shortages during lunch. Half-days also give teachers the chance to provide after-school support for students in quarantine, she said.

“Last year, they gave us the option of hybrid. So the parents that were fine with sending their kids to school did that, and the parents who were freaked out kept their kids home. It’s about giving everyone the opportunity to do what they’re comfortable with right now,” Rudyz said.

Chuisano, a stay-at-home mom to her three kids, echoed that the state should have given parents an option while the pandemic continues to throttle along. The messaging is confusing, she said, on when to send kids to school in person versus when to keep them at home while they show symptoms like a runny nose or slight cough. 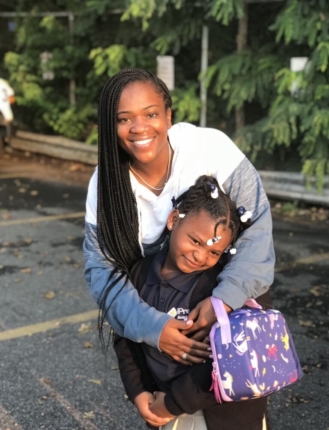 Jaquetta Baker and her 5-year-old daughter Aubrey, who is attending kindergarten virtually for two weeks.

Her oldest daughter has missed 15 days of school since September because she had COVID symptoms, which prompted a letter from the district warning another absence could result in her being held back. Chuisano called the school and an employee told her to disregard the letter, said Chusiano, who caught the virus in early December and gave it to her two younger kids.

“First they said my kids had to quarantine for three weeks, and to come back after winter break. Since they got COVID, they should’ve only been out of school for 10 days. Then my middle schooler, I call the school to tell them she’s (had a) close contact, and they make her come in because she’s vaccinated, and if not they’ll mark her absent,” she said. “It’s very confusing, and you know how guilty I feel sending her to school?”

Chuisano said she understands school officials have their hands tied, and are just following the best guidance they have at the time. She believes it’s time for the governor to get involved and give parents the option of virtual learning as long as the pandemic is around.

Jaquetta Baker, a single mom from Elizabeth, also wants Murphy to help working parents. Her job gave her the flexibility to work from home this week, but she doesn’t know what child care will look like next week.

“Now I have to worry about Aunt Sally watching my kid, then Uncle James the next day, then another babysitter, and now it’s like, I have to worry about all the people they came in contact with,” she said. “I don’t know how it’s conducive to reduce cases by having your kid be in multiple people’s care, but I guess that’s some of our reality right now.”

A colleague of hers quit Monday because she needs to care for her toddlers. On Wednesday, 11 of her coworkers called out.

“I don’t have a Plan B, I don’t have any alternate options, and I don’t get any welfare or food stamps. Everything I have, I work for, and I wish they would provide parents with some support by putting something in place granting parents to work from home while your kid cannot be in school,” she said.

Gawronski has also struggled with what she’s comfortable with, trying to find the balance for the physical and mental well-being of her 14-year-old daughter, Angelica. Her extroverted daughter’s depression and anxiety has worsened since schools shuttered, so she wants her to see her friends and engage in person, but fears she could bring the virus home.

Angelica said she was upset when she found out her school was returning to virtual learning. She’s worried she might fail her classes and have to do virtual summer school, like she did last year, because she has trouble motivating herself at home.

“I was not happy at all. I’m nervous to get COVID, and our lives matter the most when it comes to COVID … but I want to see my friends and I really don’t want to do summer school again,” she said.

Shootings Reported in Greenville and Bergen-Lafayette
Scroll to top