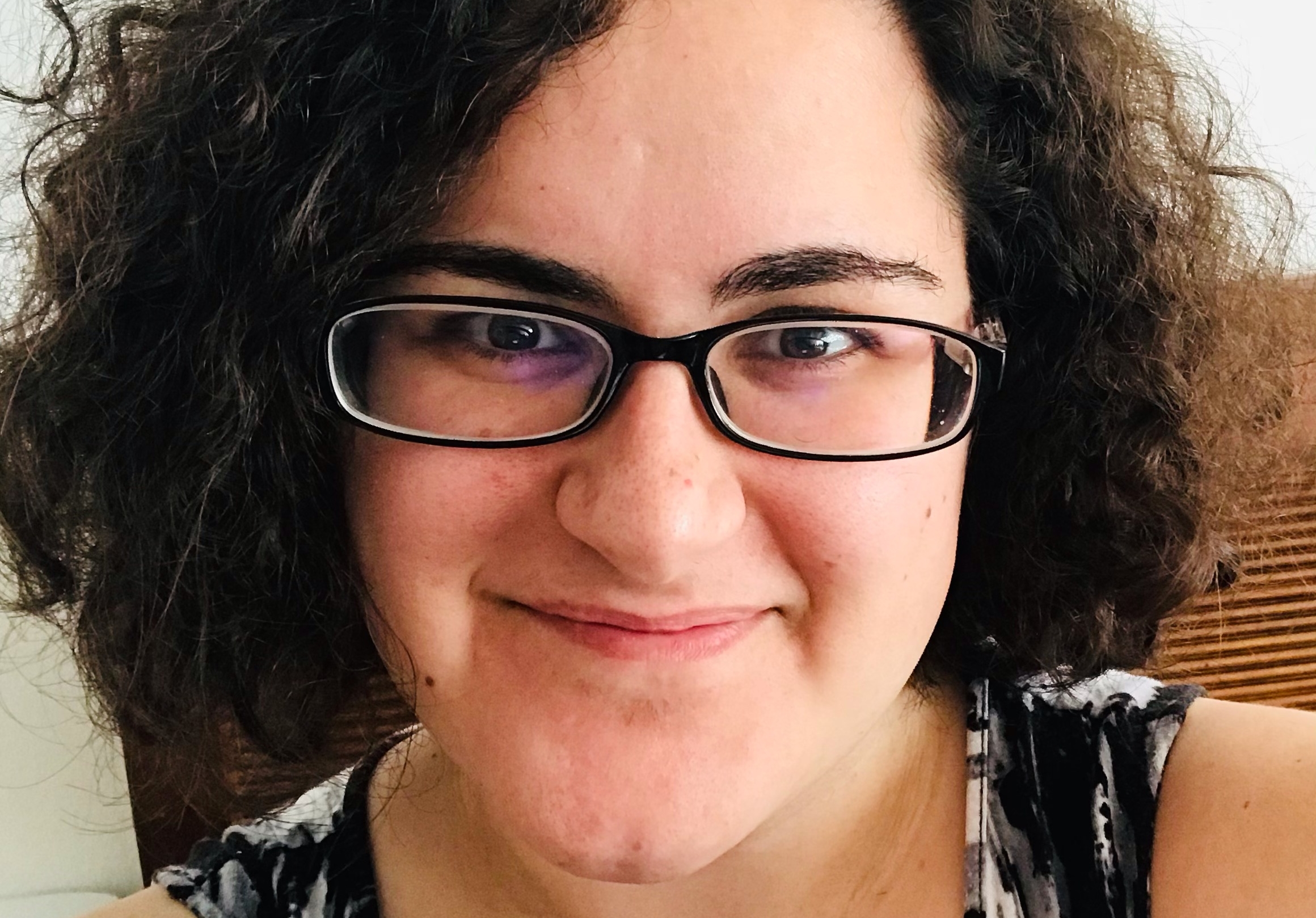 “In Our Midst” is a monthly conversation profiling Jersey City residents who are doing something really interesting. This month we’re thrilled to be speaking with Olivia Mitra Framke, whose hobby is creating crossword puzzles for publications such as The New York Times (by day she is an academic adviser at the New School’s College of Performing Arts). The conversation has been edited for brevity and clarity.

JCT: Welcome to “In Our Midst,” Olivia.

Mitra Framke: Thank you so much. I’m excited to be here.

JCT: Tell us a little about yourself. Where did you grow up, and what brought you to Jersey City?

Mitra Framke: I grew up in Millburn in northern New Jersey, so I haven’t ventured far! I went to college in the Hudson Valley and grad school in New York City. When I landed my current job at The New School in Manhattan I chose to move to Jersey City, knowing how great of a commute it provides and hearing good things about the area from a family friend who grew up here. So I’ve lived in Jersey City for about four years now, and I’ve loved it!

JCT: When did you realize you wanted to try your hand at creating a puzzle, and how did you learn the craft?

Mitra Framke: As a general game and puzzle-solving enthusiast, I was casually into crosswords growing up. My interest really skyrocketed in college, when my dad starting hoarding The New York Times magazines so that when I returned home for a visit we’d be able to do the Sunday puzzles together. During this time, I remember solving a crossword that really blew my mind—it was Liz Gorski’s Secretariat puzzle. When I realized the gimmick of the puzzle and what she had accomplished in making it, I was enthralled, and immediately started researching how people make crosswords. I downloaded some free software and toyed around a bit, but it didn’t go too far at that time.

It wasn’t until after I finished grad school that I actually started making puzzles. I was between jobs and living at home, looking for new things to do and learn. It also happened to be 2016, and with the political climate the way it was, I was desperate for a distraction. I reached out to a crossword constructor that I found via cruciverb.com who was willing to mentor me, and we were off. I remember the moment when I realized that I’d have to buy good software to really have a shot in the field (I use Crossfire, $50 USD), and I thought to myself, “If I sell a single puzzle, that’ll pay for the software.” Thankfully, I took the risk!

JCT: What reaction do you get at cocktail parties when you tell people your sideline? Are people generally intrigued and excited or intimidated?

Mitra Framke: People are usually really amazed and don’t have a clue (pardon the pun) how I do it. I’ve found that people are more intrigued than intimidated, and often want to know more. It’s definitely my go-to “fun fact” about myself.

JCT: How long does it typically take you to write a puzzle, and what is your process like?

Mitra Framke: The process for making a themed crossword is 1) develop the theme, 2) design and fill the grid, and 3) add clues. The bulk of the work tends to be in the second step, but perfecting a theme can also take a long time. People sometimes think the clues are the most work, but they’re actually the least!

I actually take a really sideways approach to construction that I think is probably not the norm. Instead of working on a puzzle from start to finish, I jump around. I do this because at any given time, I might be in the mood to specifically work on themes, or to work on grids, or to work on clues. These three steps feel very different to me—Theming is more creative and cerebral, gridding is more technical and systematic, and cluing is more research-oriented (and can also be creative). So for example, if I’m in the mood to work on a grid, I check to see what themes I have worked on that are ready to be gridded, and start gridding. There are some exceptions to this, of course, like when a theme revolves around the way the grid is set up (as is the case with all of my New York Times Sundays so far!), but this is my general process.

It’s also worth noting that some editors accept what are called “theme queries” – meaning you send them just the theme material, and if they like it they’ll give you the green light to begin gridding. This encourages the jumping-around approach, since you might be waiting for quite some time for a response about a theme.

JCT: Where do you get the theme ideas for your puzzles?

Mitra Framke: It depends. Sometimes I come across a phrase or a word that stands out to me as having “theme potential” and I write it down to investigate later. Sometimes I do research to come up with themes, like looking up upcoming anniversaries for tribute puzzles or looking at lists of categories or homophones. I have a huge list of half-baked theme ideas saved on my computer that I can dig into whenever I feel like developing a new puzzle.

JCT: Is there a database somewhere of clues and answers one can access? Is any of the material copyrightable? (I’m thinking no given the number of times such answers as “Eno'” (Musician Brian Eno) and “Ito” (figure skater Midori) appear.

Mitra Framke: Yes! I have paid annual subscriptions to two databases, one at cruciverb.com and one at xwordinfo.com. These are especially useful for checking to see if a theme idea you have has been done already. And yes – you’re right that there is no way to copyright a clue (there are only so many ways to clue things, so coming up with an original angle can be hard!). So it’s definitely acceptable to lean on clue databases for some of your cluing. However, theme ideas and grids are expected to be original. Do you know about the crossword plagiarism scandal from a few years back? It’s a really fascinating story.

JCT: What are a couple of your favorite clue and answer combinations that you’ve written?

Mitra Framke: My favorite “question mark” clue is [Point of no return?] with the answer “ACE.” My favorite cultural reference clue is [“We’re all born naked and the rest is ___”: RuPaul] with the answer “DRAG.” I also love jamming as many gaming references as possible into my puzzles! In fact, I co-constructed the “Video Games Midis” puzzle pack available for purchase on the NYT App. If you like video games and crosswords, I think you’ll really enjoy it!

JCT: I often read the short bio of the NYT Sunday puzzle creators, and it seems many are in just a few fields:  comp sci, linguistics, math, engineering. I see the relationship between those areas and word games. Do your talents as a counselor and administrator translate to puzzle making or are you just really damn good at two (or three) seemingly unrelated things?

Mitra Framke: I love this question! I actually do see a connection between my work in advising and crosswords. I decided to pursue a career in academic advising because I felt it married my skills/interest in working with people (my master’s degree is in counseling) with my skills/interest in puzzle-/problem-solving. Helping a student figure out their semester schedule or plan out their overall degree plan can sometimes be a heck of a puzzle, and I absolutely love that aspect of the job.

Mitra Framke:The world of crosswords and crossword construction (sometimes called the “Crossworld” on Twitter!) has had a really interesting last few years. The industry has been dominated by white men for a long time, and there has been a movement lately to broaden representation in puzzles. You see, editors get to decide what’s “acceptable” in terms of clue angles and the answers in a grid, but if all the editors have similar backgrounds, what’s “acceptable” gets shaped from that perspective only. As the crossword audience gets younger and more diverse, the Crossworld is demanding that the big publications change, too. Natan Last wrote a great piece on this for The Atlantic last year that I recommend checking out!

JCT: Are there any crossword puzzles you enjoy as much as those in The New York Times?

Mitra Framke: Yes! The USA Today crossword is great for people just starting out, and for veterans who just like a really smooth solve. The new editor, Erik Agard, is fantastic, and has been dedicated to improving representation—you’ll likely notice a difference with the cultural references and general tone with this publication! I also want to shout out The Inkubator, which publishes puzzles specifically by female-identifying constructors. They have themed and themeless puzzles ranging in difficulty from easy to very hard, and the clues are also very fresh and relevant as, like the USA Today puzzle.

JCT: We always like to ask our guests in this column something about their relationship to Jersey City. In your case, I’m tempted to ask you to create a fun Jersey City reference in one of your next puzzles, but hey, no pressure. Aside from that, can you tell us what some of your favorite spots are in Chilltown?

Mitra Framke: I’ve been loving walking my dog along the Newport waterfront this year. Having an excuse to get outside multiple times a day has been great, and having the view of the city and the Hudson is even better—before the pandemic I totally took it for granted.

And hey, if I ever see an opportunity for a Jersey City reference in one of my puzzles, I promise I’ll take it!

JCT: Is there anything else you’d like our readers to know?

Mitra Framke: I want to invite anyone interested in learning more about crossword construction to join this Facebook group and this Discord server! There are tons of people in the Crossworld that would be happy to help answer any questions you may have. I can also be reached on Twitter, @Livienna.