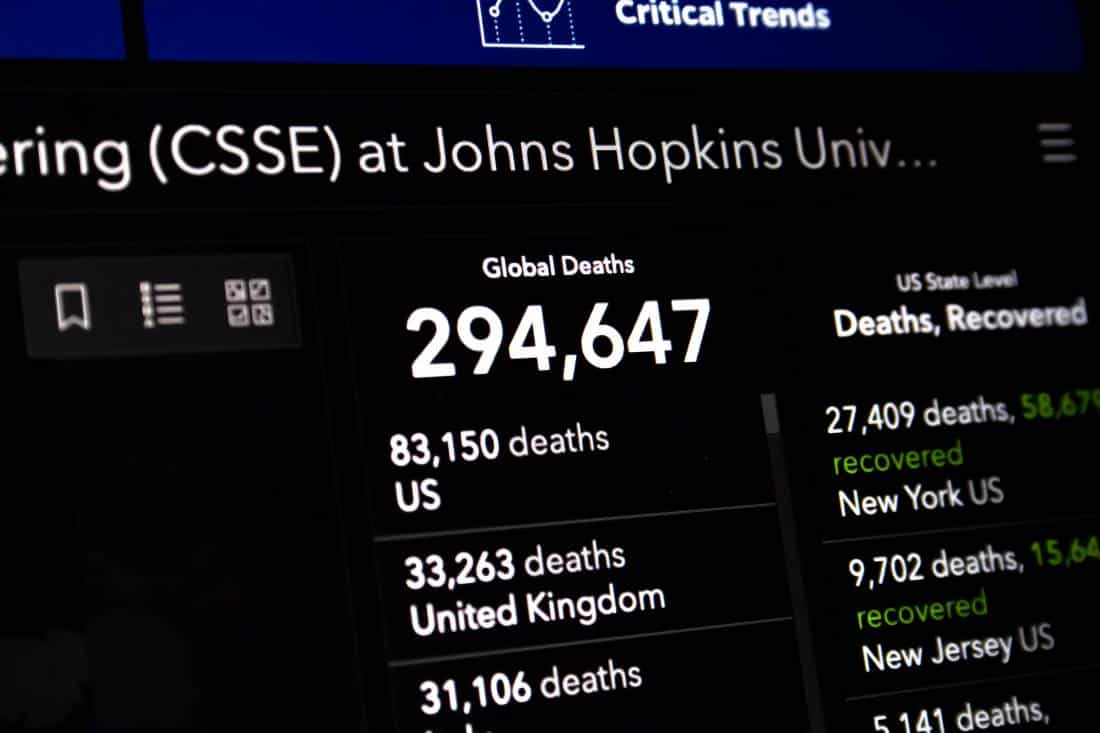 The number of people dead from COVID-19 in New Jersey is likely about 2,000 higher than the state had been reporting, as officials announced Thursday in their first count of probable deaths due to the virus.

During his daily media briefing, Gov. Phil Murphy announced that state health officials had combed through death data and are attributing an additional 1,854 deaths since March 4 — the day the first case was announced — to the novel coronavirus. On top of 26 new lab-confirmed deaths, the total number of New Jerseyans who have died as a result of the pandemic is now nearly 15,000.

There could still be more. An NJ Spotlight comparison of the most recent data on total deaths  this year for March, April and May with the five-year average for those months and the total number of lab-confirmed COVID-19 deaths for the period shows more than 4,200 “excess” deaths. Subtracting the 1,854 likely COVID-19 deaths from that total still leaves 2,366 excess deaths unexplained.

Earlier this month, experts told NJ Spotlight that home deaths, heart attacks and strokes likely related to the virus probably explain many of the excess deaths.

State health officials have been saying for weeks that they were working to try to capture likely viral deaths that had not been lab-confirmed in order to provide the most accurate picture of the virus’ death toll.

“In one day, we are significantly adding to the already weighty toll this pandemic has had on our state, and on so many families,” Murphy said in announcing the new data. “We report this out of nothing else than a solemn sense of duty. For many families, we hope that these determinations will provide a sense of closure, and of finally knowing. And for our state, I hope it steels our resolve to do all we can to save every single life we can.”

Ed Lifshitz, medical director of the communicable disease service at the state Department of Health, described the process used to calculate the probable COVID-19 deaths:

Doing all this background work is “a slow process and that’s the process that has taken us really months to catch up on, although at this point we’re essentially caught up as far as those results go at this point,” he said.

About a third of the 1,854 probable COVID-19 deaths are from long-term care settings, Lifshitz said. Nursing homes and similar setting have been breeding grounds for the virus, and the deaths of both residents and staff have been particularly high because so many of those who live in these facilities have underlying conditions that make them susceptible to complications from COVID-19. DOH data shows that almost half of all lab-confirmed deaths are related to long-term care.

Lifshitz said the state plans to update the number of probable deaths once a week.

No nationwide standard for reporting deaths

There has been some debate among states and medical experts over the reporting of COVID-19 deaths, with currently no nationwide standard. That means the actual number of deaths nationally, which the CDC placed Wednesday at 121,117, could be higher. More than 7,600 of those were probable. The CDC changed its reporting of COVID-19 deaths on April 14 to include those deaths confirmed by a lab test and those that were likely caused by the disease because they meet clinical or epidemiological criteria, as well as those in which a death certificate lists the virus as a cause.

Because state health officials used recognized standards to determine probable deaths, there are still more than 2,300 excess deaths officially unexplained in the state to date. If those deaths were all attributed to COVID-19, the state’s total death toll would exceed 17,000. But the total number of deaths may never be known.

The Battle to Protect the Homeless from Covid-19