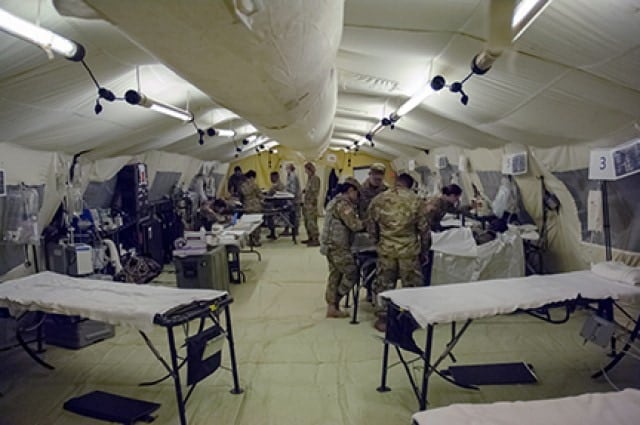 In something resembling a military operation, the state is on high alert, scrambling to add critical-care beds and ready pop-up field hospitals

After weeks of planning and preparations, New Jersey is now ready to activate its hospital-capacity contingency plans, as facilities in the northern counties are becoming increasingly overwhelmed by a surge of patients with COVID-19.

State officials are preparing to shift patients with more limited clinical needs from existing hospitals to the new “field medical station” set up by the U.S. Army Corps of Engineers in the Meadowlands in order to make room for individuals who need critical care; the field station, in Secaucus, is expected to start accepting patients Monday. Newark’s University Hospital, the region’s Level 1 trauma center, will oversee the field station and transport the patients by ambulance or air, if needed.

“As we see the number of cases increasing across the state and the pressure on our hospital systems building, we are preparing to release that valve by standing up alternative care sites,” New Jersey Department of Health Commissioner Judith Persichilli said Thursday during the state’s daily briefing on the coronavirus pandemic. Nearly 25,600 residents have tested positive for COVID-19, the resulting disease, and 537 have died.

When hospitals run out of room

The DOH has used statistical models to predict when the worst of the outbreak would hit hospitals, and Persichilli said Wednesday that, as expected, the “surge is beginning to occur in the northern part of the state.” She said the department helped several facilities secure extra ventilators before they ran out and, at points in recent days, roughly a dozen hospitals in northern counties became too full to accept new emergency patients, forcing them to “divert” ambulance traffic to other hospitals for anywhere from two to 12 hours.

“Increasing critical-care capacity is the key to managing the surge,” Persichilli said. In addition to the Secaucus field hospital, the USACE is working with the state police and others to establish additional operations in Edison and Atlantic City in the coming weeks. Altogether, this effort is expected to add nearly 1,000 hospital beds for patients who don’t need critical care.

“The hospitals are packed. We still have flu season, we still have everyone else that goes to a hospital with a medical or an emergency surgical problem,” Persichilli explained Wednesday. “That doesn’t go away during a crisis.”

New Jersey’s hospitals provide nearly 19,000 beds, plus an additional 2,000 critical-care spots. But even with the strict social distancing now in place, the models suggest the state could need an additional 2,000 critical-care beds to care for the crush of patients who are likely to suffer severe respiratory symptoms from the novel coronavirus, which is now spreading rapidly through the community. Reported COVID-19 cases jumped 15% between Wednesday and Thursday and deaths climbed by one-third, although officials said some of the fatalities may have occurred earlier in the week.

To meet the critical-care need, the state is also looking to create another 1,000 beds by reopening recently closed health care facilities, including the former Woodbury Hospital previously operated by Inspira Health in Gloucester County. St. Joseph’s Health in Paterson has pledged to reopen the former Barnert Hospital adjacent to its main hospital, which would produce another 154 beds, according to reports. State officials are also looking to repurpose unused parts of operating hospitals, hotels and other options, but declined to offer specifics Thursday, calling the effort a work in progress.

When ready, these reopened facilities will also accept lower-acuity patients “decanted” from existing hospitals, creating room for new critical-care patients. Hospital operators have been asked to double their critical-care capacity, something many have already done by rearranging facilities or reopening closed wings.

“We’ve gone through looking at every square inch of every facility that we have where we can safely put patients,” Barry Ostrowsky, president and CEO of the massive RWJBarnabas Health system, with 11 hospitals in the northern and central parts of the state, told NJ Spotlight. “When you look at the model, the need for facility-based beds and equipment will certainly outpace that which is currently available in our state,” he said.

The coronavirus pandemic is putting “unprecedented pressure on the health-care delivery system,” Ostrowsky said, and he anticipates the northern counties will “get to its crescendo and then it will hit that probably over the next two weeks. So the strain on our health care facilities, the people who staff them, the equipment and resources is literally an hour to hour, day to day, constant battle,” he said.

“We’ve been going at this seven days a week for weeks and we haven’t hit the worst of it. And that’s a scary thing,” Ostrowsky said.

While University Hospital is slated to manage the Secaucus field site, Ostrowsky said RWJBarnabas will oversee the Edison operation, which state officials said is expected to have 500 beds. The Barnabas system also includes Robert Wood Johnson University Hospital in New Brunswick, which serves as Central Jersey’s Level 1 trauma center. State officials have not said who will run the Atlantic City operation, but Cooper University Health Care, based in Camden, is the South Jersey Level 1 trauma center.

“We are honored to do it and we are uniquely qualified to it,” University Hospital president and CEO Dr. Shereef Elnahal, the former state health commissioner, told NJ Spotlight; the hospital already coordinates emergency response for Newark and its international airport and runs the busiest trauma center in the state.

Elnahal said he spoke Thursday with leaders of the other northern hospitals to coordinate plans to decant patients or shuttle ventilators and PPE to where they are needed most. The state’s emergency management team is preparing to give UH access to a regional dashboard that provides real-time information on bed capacity and equipment at northern hospitals, a system Elnahal expects will be operational early next week.

The Secaucus field hospital will start slowly and accept more patients as staff and equipment come into place, officials note. Elnahal said the Veterans Administration facility in East Orange has also agreed to take civilian patients — a first for the military site — and East Orange General Hospital, which has struggled to fill its beds, is also available to care for lower-acuity patients.

“All of that depends on the availability of equipment, supplies and staff,” he said. “There’s going to be a ramp-up (at the field hospitals), not a switch that flips on.”

To help coordinate the movement of patients within a region, the state is using data collected by the New Jersey Hospital Association through a portal that enables all of the state’s 71 acute care facilities to submit daily reports on their bed capacity, the size of the workforce and the availability of critical equipment, like ventilators and protective gowns and masks. Reporting began Monday and state officials said they plan to make the information public next week.

While Persichilli and Gov. Phil Murphy continue to express confidence in the state’s hospital-bed capacity — assuming the field sites and reopened facilities come online as planned — they are concerned about staff levels, ventilators and the personal protective equipment, or PPE, needed to keep health care workers safe when treating contagious patients.

The state has pushed the federal government to provide supplies from a national stockpile and is also collecting donations through its website, www.covid19.nj.gov; these items will be distributed to hospitals as needed. Persichilli’s team is also working to match 5,200 volunteers — more than a third of them licensed health care clinicians — with field hospitals or other alternative medical facilities.

While these emergency facilities are intended for lower-acuity patients, Persichilli said they will largely be able to function as full acute-care facilities, with X-ray capacity, lab services, a pharmacy and a full complement of staff, including behavioral health and social workers. The sites are not focused on COVID-19 patients, but she said they would be fully equipped to safely handle patients who develop the disease.

“We will have a full team there to meet not just the medical needs, but also the mental health needs and also the discharge-planning needs of the individuals who will be there as patients,” Persichilli said. The Meadowlands site “will be a valuable resource for our northern hospitals (that) are already experiencing an increased demand for care,” she added.