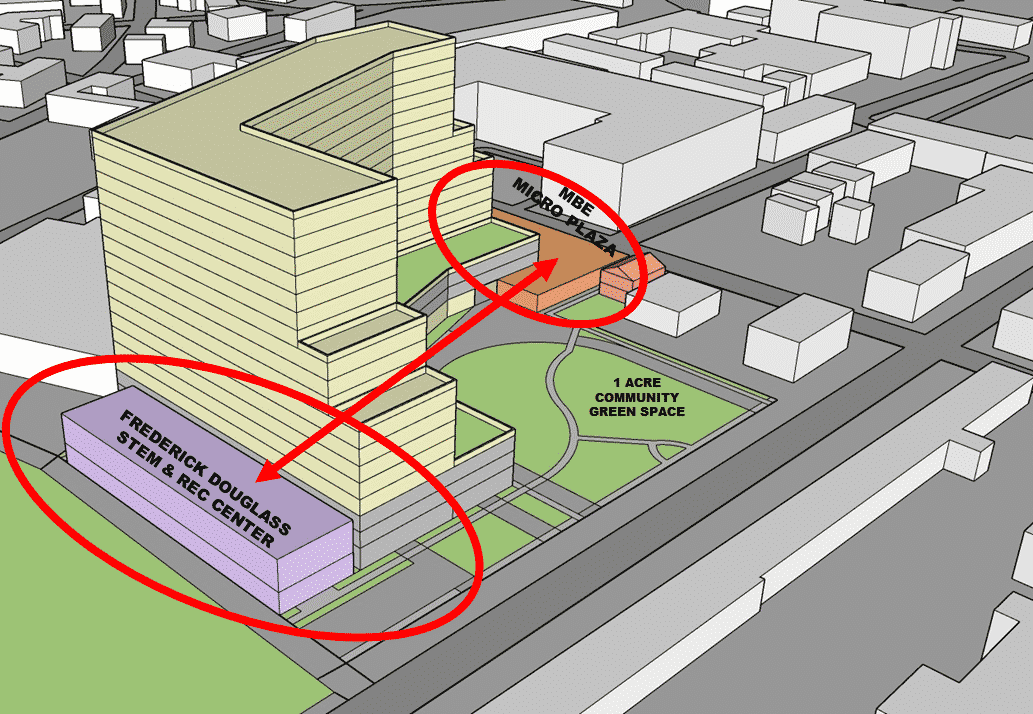 A recent decision by the Jersey City Redevelopment Agency to authorize a condemnation suit to acquire a derelict warehouse in Bergen-Lafayette is raising new questions about the testimony of the agency’s executive director, Diana Jeffrey, regarding another project known as Morris Canal Park Manor.

Condemnation proceedings are sometimes used by the JCRA to acquire blighted property for redevelopment where the property owner is unwilling to sell.

The 17-story Morris Canal Park Manor project, also known as “Steel Tech,” was the subject of a contentious December 16 City Council meeting at which the council voted to amend the Morris Canal Redevelopment Plan to allow the luxury project, also in Bergen-Lafayette, to move ahead.

Community members argued that the project would accelerate gentrification and violate the Morris Canal Redevelopment Plan, which provided that the parcel would become part of Berry Lane Park.

Now, the JCRA’s authorization of a condemnation suit at 125 Monitor Street is calling into question the reasons given by Jeffrey for not having employed the same legal strategy at Steel Tech when it became clear that the owner would not sell the property.

Councilman-at-Large Rolando Lavarro asked Jeffrey why the JCRA didn’t seek to acquire the Steel Tech property by way of condemnation. Jeffrey replied that the JCRA would not “typically” commence condemnation proceedings without having a developer who could fund the cost of the litigation.  She also said that to acquire the Steel Tech property would have been “infeasible and reckless” because of the possibility that at the end of the litigation the city might end up being forced to purchase the property for a price beyond the city’s means. The JCRA “doesn’t undertake condemnation lightly,” she said.

What Jeffrey did not disclose to Lavarro and the council was that on the previous day, members of the agency’s board of commissioners voted to acquire nearby 125 Monitor Street and to authorize condemnation proceedings if necessary. 125 Monitor Street has an appraised value of $5.76 million, close to the value of $6 million Jeffrey last put on the Steel Tech property.

When JCT asked about the seeming contradiction, administration spokesperson Kimberly Wallace-Scalcione echoed Jeffrey’s response. “The potential exposure for the Steel Tech site was millions upon millions more than what the city could afford and therefore would be irresponsible and unfair to the taxpayers, which is a completely separate and incomparable situation to the 125 Monitor project where the city will pay zero out of pocket.” She further pointed out that the developer would be picking up the cost of the lawsuit whereas with Steel Tech, the city would have had to pay for the litigation, a point that Jeffrey made as well.

But some are unwilling to give Jeffrey and the administration the benefit of the doubt given that many of Jeffrey’s statements appear to have been flat out wrong or misleading.

For instance, in a memorandum to City Council President Joyce Watterman prior to the council meeting, Jeffrey stated that Steel Tech “was never part of the original plans for Berry Lane Park.” Jeffrey was forced to walk back that claim when former JCRA director of development, Ben Delisle called her statement “crazy and disingenuous.” A ream of documents backed up Delisle’s claim.

Then, during the council meeting, Jeffrey seemed to inflate the property’s value to bolster her claim that the JCRA decided not buy the Steel Tech property because it had been “priced out of the market.” But she was forced to acknowledge that her estimate of the land’s value had been based not on an actual appraisal but on an informal one by unnamed persons at the JCRA. “I’m not saying that we did an appraisal and that it came back at $6 million…it was our assessment that it could be worth as much as $6 million.”

Later in the meeting, Councilman-at-large Rolando Lavarro presented Jeffrey with a 2017 JCRA letter in which the agency “reiterated” its offer of $3.15 million for the property. Jeffrey countered that this price was for negotiation and didn’t reflect its actual value. In fact, a month later an appraisal done for purposes of obtaining a Green Acres grant valued the land at $2,950,000, undermining her claim that in offering $3.15 million she was merely lowballing the seller.

Jeffrey further undermined her credibility when discussing the standard a court would use to value the property in a condemnation proceeding. Lavarro presented her with a 2018 letter from New Jersey Realty Advisor Group, an appraiser. In it, the appraiser stated that the land would ultimately be appraised using its (then) current zoning, which was industrial.  Jeffrey disagreed, stating that the appraisal would be based on “highest and best use.” Jeffrey’s statement was grossly misleading.

According to the leading New Jersey Supreme Court case on the subject, property is normally appraised based on current zoning ordinances. Only if there is “a reasonable probability that a zoning change would be granted” will a court depart from using the current zoning for valuing the property.

Had Jeffrey — by all accounts a capable attorney —  been completely honest, she would have conceded that the likelihood of a court placing a high value on the property was small. The “current zoning” was industrial. The land was slated to become part of a park pursuant to a long-standing redevelopment plan.

Questions posed by the project’s council sponsor, Ward F Councilman Jermaine Robinson, should have also set off alarms. After Lavarro finished, Robinson, the man who had spent years putting the deal together, demonstrated that he didn’t know what the land — the one card the developer held in the negotiation — was worth. Without a hint of embarrassment, he said to Jeffrey,”I don’t know if the owner or the seller’s owner has today’s value…like do we have a number…did we do an appraisal?” Jeffrey answered, “No, we didn’t do an appraisal…we haven’t done a recent appraisal, no.” No one thought to ask Robinson how he could have gone into the negotiation so unprepared.

What motivated Jeffrey to spin the case for Morris Canal Park Manor may never be known. But Jeffrey’s and the administration’s suggestion that the city lacked the funds to acquire the property and to fund a condemnation suit strikes some as questionable.

One person knowledgeable about the workings of Jersey City redevelopment, who asked to remain nameless, said the city’s claim that in a condemnation proceeding at 125 Monitor Street it would be avoiding the cost and risk sounded more like a pretext. According to that source, the decision not to condemn the Steel Tech property was more likely based on a shift in priorities towards development and away from parks.

Former JCRA Executive Director Bob Antonicello also discounted financial risk and the cost of litigation as the city’s motivation in moving ahead with the project. “When we began the process of assembling the parcels for Berry Lane Park, we didn’t have 25% of the $40 million we ultimately needed. If we had worried about the cost of condemnation in 2006 when we began the process, the park never would have been built.”

Indeed, history has also shown that when it suits city hall, money can and will be found to buy property and to litigate. In 2018 Jersey City bonded for $170 million to purchase the land for the massive Bayfront development on the Hackensack River. And in it’s ill-fated multi-year lawsuit to avoid a city-wide revaluation of properties — a case in which the trial judge ruled that the administration acted in bad faith — the administration spent close to $500,000 on legal fees.

If Councilman Robinson considered working with a different developer willing to fund a condemnation case and committed to a project acceptable to the community, he didn’t tell anyone.  The community was presented with a massive fait accompli.

In the end Jeffrey’s misrepresentations and spin combined with Robinson’s questionable handling of the project may be why many in the community feel that the Steel Tech project looks like a backroom deal. Said June Jones, President of the Morris Canal Community Development Corporation,”We didn’t know about Steel Tech until they had been in discussion for almost two years.”

COVID-19 Vaccines: How NJ Tries to Juggle Supply and Demand

The Latest Plans by Your School District for Remote, In-Person or Hybrid Le...
Scroll to top