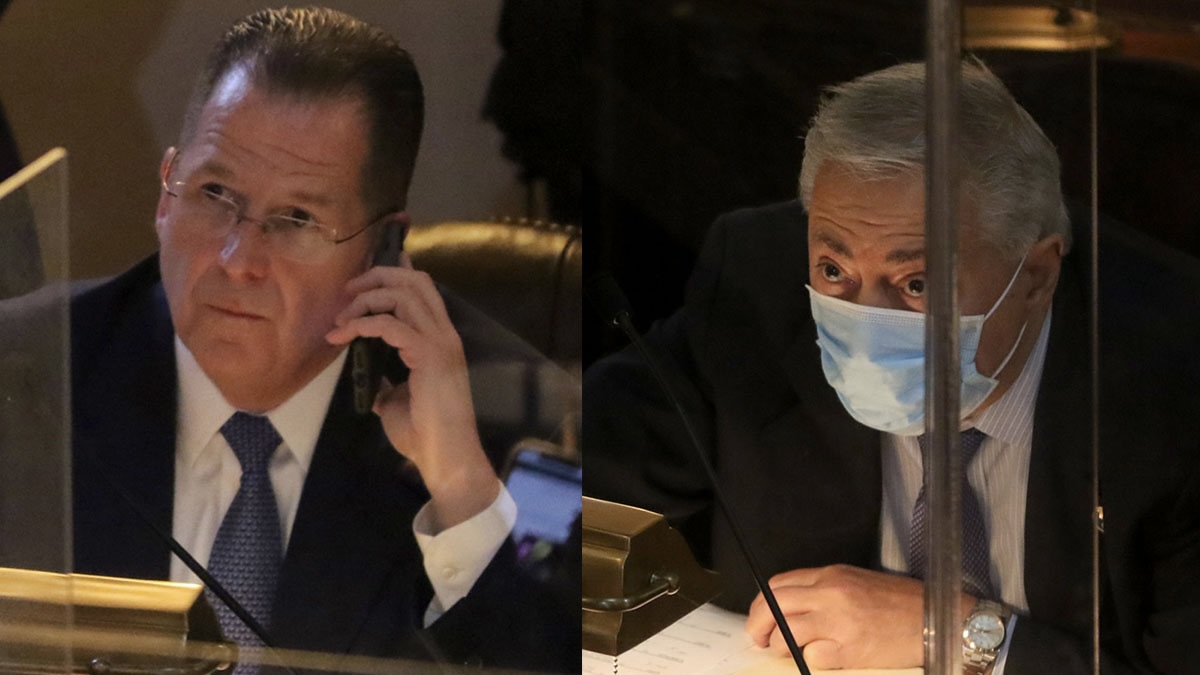 Republicans and Democrats adopted new legislative district boundaries Friday, their bipartisan vote an unprecedented compromise for a commission that has historically relied on a court-appointed tiebreaker to end partisan gridlock.

The adopted map is likely to favor Republicans by making some competitive districts friendlier to the minority party and pitting four Democratic senators against each other in two districts. It will remain in place for about a decade and start after the November 2023 election, when all 120 legislative seats are up for grabs.

“We all said we were looking to end in a day where everyone would be proud and we would do something potentially historic and give the residents of the state a map they could all be proud of,” said Al Barlas, who chaired the panel’s Republican delegation. “And I think we did that today.”

People of color account for a majority of the population in 10 other districts, Barlas said.

That falls short of the number sought by advocates.

“We wanted 20 majority people of color districts because we have a state that is half people of color. We didn’t get there. We got to 17,” said Matt Duffey, special counsel for redistricting at the New Jersey Institute for Social Justice. “It does look like have a number, maybe two or three other districts, that are really close, which would be great.”

The new district map may force a faceoff between Hudson County Democratic Sens. Nicholas Sacco and Brian Stack by putting North Bergen, where Sacco is mayor, and Union City, where Stack is mayor, into one legislative district, the 33rd.

LeRoy Jones, who chairs the commission’s Democratic delegation and the statewide party, defended the move by saying “consensus cannot be achieved without compromise from all parties.”

“Many of our commissioners and party leaders were left with very difficult choices, which includes some very longtime and very well-respected Democratic state senators who now find themselves in the same district,” Jones said.

Moving Stack’s home to a new district will leave a vacant Senate seat in a district made up of Hoboken and parts of Jersey City that could boost diversity in the Legislature’s upper chamber. The redrawn district is represented in the Assembly by Assemblyman Raj Mukherji, who is one of just six Asian legislators in the state, and Assemblywoman Annette Chaparro.

A proposal by the commission’s Democratic delegation to split Jersey City across three legislative districts did not make it into the final map.

Sens. Nia Gill and Richard Codey, both Essex County Democrats, will find themselves competing for a single Senate seat in the 27th district, which now includes suburban Essex County towns and the city of Clifton.

Assemblyman John McKeon (D-Essex) will remain in the 27th after lines are redrawn, though that district will now include Montclair — where Assemblyman Tom Giblin lives — and no longer include South Orange, home of Assemblywoman Mila Jasey. Jasey’s town was moved to the 28th District, one of two Newark-based legislative districts.

The commission’s intent to adopt a compromise map and the details of that plan were first reported by the New Jersey Globe.

Most other districts saw less drastic changes than those proposed in a Republican map released for public comment earlier this month.

The 11th District — the only district in the state where one party holds the Senate and another holds Assembly seats — will grow slightly more Democratic. The commission did not put Neptune City and Neptune Township into separate districts, as had been proposed.

The 16th District, where Democrats now hold all three seats after Sen. Andrew Zwicker flipped the Senate seat for the party in November, is set to grow slightly more Republican.

The new map will move Assemblyman Brian Bergen into the 26th District with Sen. Joe Pennacchio and Assemblyman Jay Webber, grouping some of the state’s most conservative Republicans in a single district.