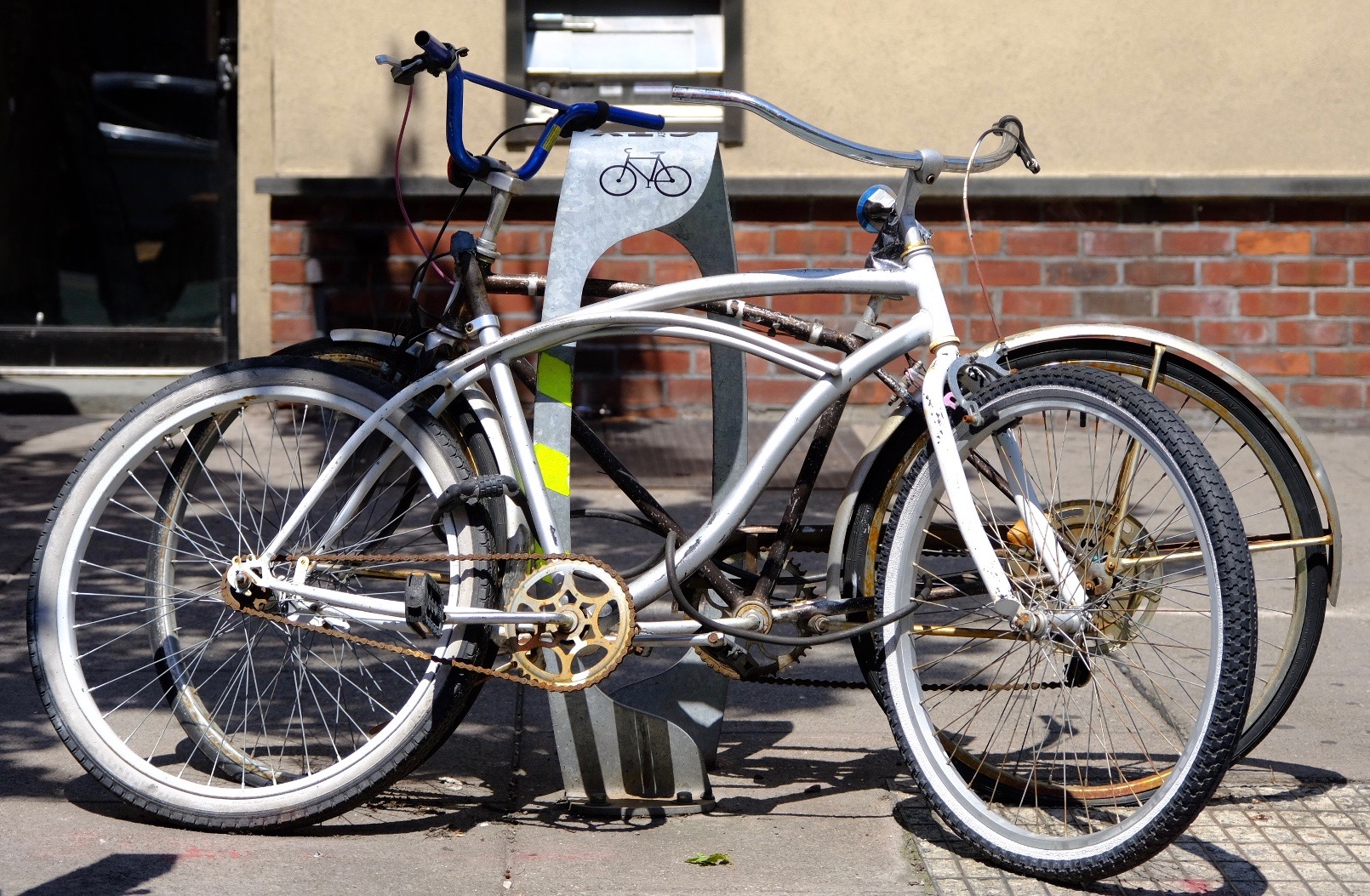 Cyclists of Jersey City and the world, unite! You have only your bikes— and chains—to lose.

But if it’s any consolation, Jersey City isn’t alone.

According to the New Jersey State Police, as of 2016 (the last year for which bike snatches were listed separately as a category of larceny), Hudson County had more reported bike thefts than any other county in the state: 1,001. But Jersey City definitely accounts for a big percentage of these. Four hundred one bicycles were reported stolen in 2017; 167 in 2018; and 340 in 2019.

Each year, the majority of bikes were purloined from the city’s east police district, which encompasses the downtown ward—home to thousands of commuters, many of whom park their bikes near the Grove Street PATH station, an inviting target of bike thieves.

The second-highest total of the city’s bike takings reported were in the north district, home to the Journal Square PATH station, which is also the scene of much bicycle-related crime.

But almost a year ago, prodded by a recommendation from the Journal Square Business Improvement District, the Port Authority contracted with Oonee, a Brooklyn-based firm, to install and manage a secured indoor bike-parking pod on the street level of the Journal Square PATH complex. 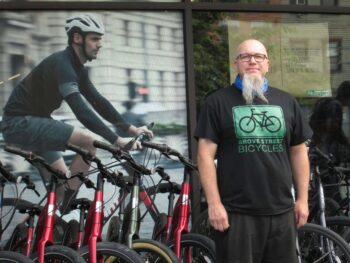 According to its website, Oonee “offers space for 20 bikes on a first-come, first-served basis. For a limited time, access can be reserved for free for the entirety of 2020.”

The company, headed by co-founder and CEO Shabazz Stuart, also operates a similar pod across from the Barclays Center in Brooklyn.

Bikers access the pod with a coded keycard or cellphone app. “We provide each user with insurance to cover the appreciated value of their bike,” Stuart said, if a bike should disappear.

That happened in October 2019 when two people reported their bikes missing. In both cases, according to Stuart, the owner had failed to lock his bike, but Oonee made both individuals whole nonetheless, and nothing’s happened since then.

The Journal Square pod caught on quickly, and by fall 2019 “we had a significant waiting list,” Stuart went on to say. A recent patron survey found that a majority park for eight to 16 hours—much longer than at a typical bike rack.

Unfortunately, After the coronavirus struck, because most of the pod users had been commuters, pod usage decreased.

Still, the P.A., according to spokeswoman Abigail Goldring, deems its pilot pod a success and remains “… committed to expanding biking options for employees, customers and other patrons of our facilities to support clean and healthy modes of transportation.”

Goldring added, “Bicycling was already growing as an alternative transportation option before the pandemic, so we know that the Oonee pod will continue to be a convenient amenity for those commuting to and from the Journal Square Transportation hub as offices reopen … we’re looking at additional locations to help solve the ‘last mile’ problem for our customers. …”

Goldring declined to name any other PATH stations that might host any other bike pods.

The bike riding community in Jersey City commends the devices as well.

“We love the pod,” said Patrick Conlon, board president of Bike JC, a local nonprofit bike advocacy group. “It would be nice if we had an even larger bike infrastructure, especially around transit hubs, where a lot of commuters tend to ride their bikes to and get on train. Look at a country like the Netherlands, which has many facilities dedicated to bikes and scooters.”

Conlon said Bike JC has been talking with the city about doing something to fill the bike parking gap, and it appears the city—which is continuing to expand bike pathways along major vehicular routes—is preparing to issue a request for proposals for secured bike-parking facilities.

It wouldn’t be the first time that concept was broached: In September 2019, Jersey City published a “Let’s Ride JC Bikeway Design Guide” that advised, “Providing bicycle parking and other ‘end-of-trip’ facilities are critically important to support cycling as a viable mode of transportation.”

The guide offers several strategic alternatives to accomplish that goal but makes no specific recommendation.

Even the simplest form of bike parking has taken a hit locally. City Bike JC, contracted by the city to provide bike sharing, has relocated eight of  its least-used bike docking stations from Greenville to areas that see more heavy use—a move that Bike JC’s website says may make sense from a business point of view but will still end up hurting already underserved and low-income neighborhoods.

Whatever solutions the city may come up with can’t come soon enough for folks like local small businessman Alfonso Acevedo, whose bikes serve as his primary mode of transit.

About eight months ago, Acevedo had two bikes stolen from open racks at the Journal Square PATH. “They had it on camera, but unless the thief is caught red-handed, the cops do nothing,” he said. “It’s rare for them to stop anyone to check a serial number on a bike [to check on whether it’s been stolen]. Luckily, I had insurance and made a claim.”

It is just a hunch, but Acevedo believes “80% of bikes stolen probably go unreported.”

Requests for a comment on the matter from a city hall spokesperson were unfulfilled, but the nonprofit Center for Problem-Oriented Policing based at Arizona State University had some relevant observations in a report released in 2008.

“Interviews with bicycle theft victims indicate that underreporting is largely due to victims’ belief that the police are not interested in bicycle theft and cannot do anything about catching the offender and returning the stolen bicycle,” the report noted.

That impression is reinforced by the fact that many local police departments lump bicycle thefts with overall larceny in their incident reporting rather than breaking out bicycle crimes as a separate entity.

The POP Center notes that, “Clearance rates for bicycle thefts remain consistently low” for these reasons: “[T]here typically exists little relationship between the victim and the offender, and hence it is difficult to identify suspects”; bike takings being a crime of stealth which typically “… goes unnoticed or unchallenged”; and even when bike thefts are reported to police, “… the majority of bicycle owners cannot supply sufficient details (including proof of ownership) to assist in an investigation.”

Too many riders – particularly novices – have the wrong attitude toward their bikes, cautioned Rodney Morweiser, owner of Grove Street Bicycles. “They have the sense of it being a toy, of no value,” he says. “Or, those desperate to buy or sell a bike are unaware it can be stolen. Or they’re oblivious to locking their bike.”

So what should bike owners to keep their property safe? Experts offer the following advice:

Take this counsel seriously. A report published in June 2008 by the U.S. Justice Department’s Office of Community Oriented Police estimates that more than 250,000 bicycles are stolen every year. Many others, it notes, go unreported.

Editor’s Note: A previous version of this story stated that the Oonee pods would cost $2 per month beginning in 2021. The company is now waiving that planned fee.

New Jersey Has Spent Only a Fraction of $2.4B Federal COVID-19 Aid, Legislative...
Scroll to top