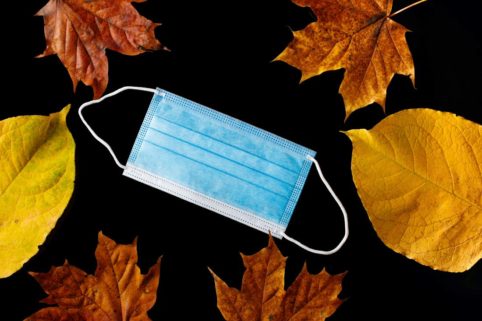 Concerned about folks getting together with extended families and not following mask and social-distancing guides, Murphy cuts size to 10 people

No hugging or handshakes with family. Skip the singing and loud music, which only causes people to raise their voices. And it looks like no crowding on the couch to watch football games with the cousins.

Those were some of the grim recommendations for the Thanksgiving holiday, as state officials unveiled new restrictions on public gatherings Monday in an effort to tamp down the growing rise of COVID-19 statewide.

It was a day of disheartening news in general from Gov. Phil Murphy and his top health officials, who warned of not just rising daily case counts but the possibility of record hospitalizations as well.

“If people are not vigilant, it could be worse” than the 8,300 hospitalizations recorded at the April peak, said state Health Commissioner Judith Persichilli. “I can’t encourage people enough to understand how their behavior — each one of us, our behavior — can help us manage that.”

Nearly 15,000 new cases have been diagnosed over the past four days, according to state reports, with some of the highest daily spikes recorded since the pandemic emerged here in March.

As a result, Murphy on Monday announced plans to limit indoor gatherings to 10 people, down from 25, starting this morning. Outdoor events will be capped at 150, down from 500. In both cases there are exemptions for religious services, political gatherings, weddings and funerals or memorial services.

WATCH: Under strain from rise in COVID-19 cases, some NJ hospitals divert ambulances

Murphy said his administration is closely monitoring case counts, hospitalization numbers, positivity rates and other factors to determine if additional public or business restrictions are needed.

“I don’t think we’re going to be taking any more steps to open up,” he said. “No state crushed this (epidemiological) curve like New Jersey. We’ve just got to do it again,” Murphy added, repeating a phrase he used constantly during the pandemic’s initial surge last spring.

Public must do its part

According to state health commissioner Persichilli, predictive modeling suggests that public compliance with mask wearing, social distancing and other precautions must return to where it was seven months ago, when roughly half the population followed those COVID-19 guidelines, to avoid the level of hospitalizations recorded at the pandemic’s initial peak in mid-April. “Pandemic fatigue” has led to a decline in compliance, officials note.

The state’s pleas for public compliance are particularly focused on Thanksgiving, which public health officials have warned could dangerously exacerbate the current trend if people celebrate together in large groups, as is common.

On Monday, Persichilli highlighted the complications involved with simple traditions — like gathering around a table, passing dishes of food, or even sharing serving utensils — that could now pose a threat. She recommended people consider celebrating outside, or open the windows while running the heat and air conditioner to maximize circulation inside, and urged hosts to dispense hand sanitizer and stock extra disinfecting wipes.

“As the governor has stated, this will not be a normal Thanksgiving. With the alarming surge in our cases, we all need to be vigilant and take all of the public health precautions that helped us to limit the spread of the virus last spring,” Persichilli said. “Our lives — and the lives of our loved ones — depend on it.”

Perhaps the starkest warnings involved recommendations related to New Jersey’s long-term care (LTC) facilities, which house tens of thousands of frail and elderly residents; according to state data, 241 of these sites have active COVID-19 outbreaks. The state Department of Health planned to issue new guidelines for those health care providers Monday, with steps they can take to support safe family visits during the holiday season.

Persichilli said the state “strongly recommends against” removing loved ones from nursing homes or other places of long-term care so they can join family celebrations at home, given the risks and logistical complications. If they leave a long-term care facility, residents would need to quarantine on return there and, if capacity there is strained, individuals may be placed on a waiting list before they can get back in, she said.

“We are still concerned about the number of outbreaks we are seeing in long-term care, so we need to be especially vigilant to protect this population,” Persichilli said. “Residents of long-term care facilities are particularly susceptible.  Bringing your loved ones home could put them at risk.”

More than 281,000 COVID-19 cases have been diagnosed in New Jersey since March, including some 16,600 likely fatalities, according to state data. Nearly one out of every 10 residents tested late last week were found to be positive and 12 of the state’s 21 counties reported a triple-digit rise in new cases on Monday alone.

State officials have long blamed private gatherings for much of the increase and hesitated to reverse steps they had taken to reopen the economy and public spaces. That began to change earlier this month, when Murphy called for new restrictions on bars and indoor dining and suspended out-of-state youth sports; some communities, like Newark and Jersey City, have taken additional actions to reduce social interaction.

Schools make COVID-19 calls for themselves

Murphy has opted to let local school districts decide whether to allow in-person education, use remote or online lesson or go with a mix of both, underscoring that relatively few cases have been tied directly to school facilities. But youth sports and the rituals associated with these events — like pre-game locker-room meetings, or post-game pizza parties — remain a concerning source of coronavirus transmission, he said Monday.

One sport in particular appears to be causing particular headaches for public health officials. “I want to say, very specifically, hockey is in our crosshairs,” Murphy said Monday.

The administration is hearing about players and their parents who are not complying with the mask and social-distancing mandates, Murphy said, adding there is also anecdotal evidence that hockey families are refusing to provide information to contact tracers tasked with trying to reduce the spread of the disease.

“We’re sick and tired of hearing this, folks, and we reserve the right to take more drastic action,” Murphy warned. “And if we don’t get better cooperation and better compliance, we will.”