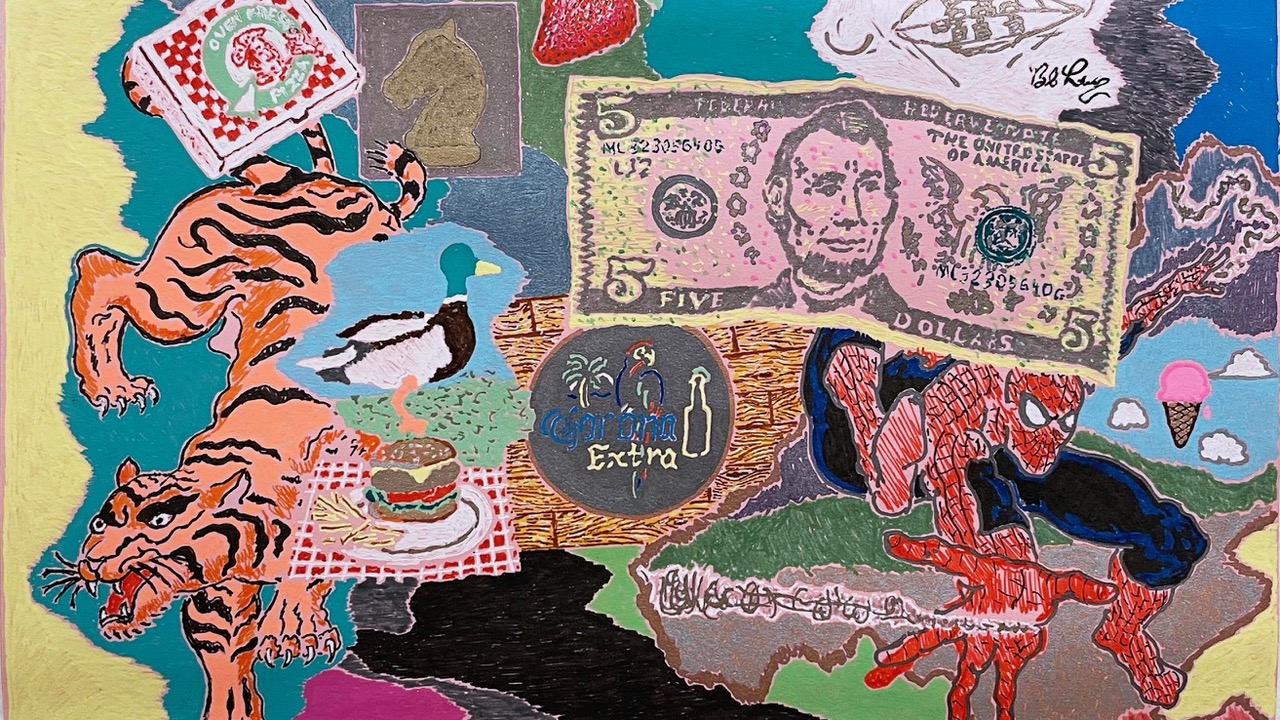 No one on the planet has enjoyed the pandemic. Some personalities, however, are better disposed to handle isolation than others. For the outgoing, social distancing has been a bear, and possibly a cause for psychological destabilization. But there’s a certain kind of person who doesn’t quite mind days spent indoors, shut away with novels and anime, streaming video and daydreams. You may be one of those people yourself.

If you are, I imagine you’ll receive “Cryptic Clutter,” which closes at Deep Space Gallery (77 Cornelison St.) on Sunday, December 5, with that combination of recognition, amusement, and slight embarrassment common when introverts greet other introverts. Jersey City mixed-media artist Macauley Norman, who has exhibited his work at Deep Space before, peppers his paintings and sculptures with cartoon characters, imagery from video games, logos, and a few sketches suggestive of PornHub screenshots. One piece depicts a bearded and bespectacled young man, beer bottle close at hand, cut-outs of the Incredible Hulk and Spidey and an action figure in its plastic case on the wall behind him. He’s seated in front of a chessboard; he’s playing black, and he’s winning.  Smaller paintings juxtapose Charlie Brown with the Batsignal, a flowered skull, a cigarette lighter, and a Yuengling lager label. (Brewski is a major motif.) A copy of The Sheltering Sky sits unattended on a kitchen table. Norman has a point to make about the landslide of popular cultural signifiers we encounter daily, and the synapse-scrambling multiplicity of stimuli in circulation. But certain visitors to Deep Space are going to see this show and just think it looks like home. 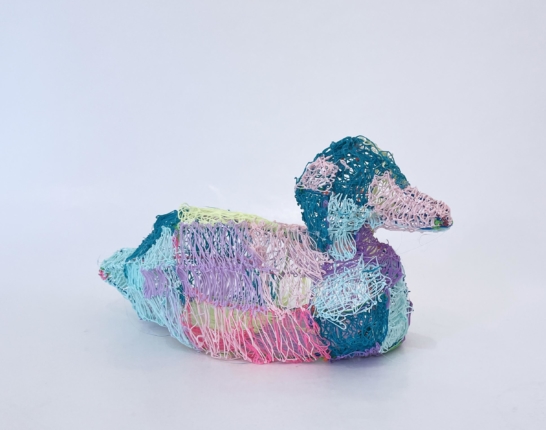 Norman has honed his techniques for generating that feeling of homey intimacy — that same protective, insular vibe that Rivers Cuomo sings about on songs like “In the Garage.” Some are thematic, some are chromatic, and some are purely textural. His color palette is reminiscent of toys and comic books: his works are full of pale-moon yellow, baby aspirin pink, and those placid light blues that the sky never seems to be in reality, but always is in daydreams. His shapes are yarn-soft, and frequently melt into each other; he likes paper dolls and mood boards and overlapping pages tacked to cork, like last month’s (or last year’s) unheeded reminders. Even when the images are threatening — revolvers, dry bones, Giger’s Alien in grey silhouette — everything feels oddly gentle. These are icons, ideas from popular culture, and from a defensive position in your den, they can’t hurt you.

Or can they? The first room of the exhibit is dominated by a painting that seems to be struggling toward the status of interactive sculpture. From an old-fashioned TV screen laureled with bent antennas, a sheriff levels a handgun straight at the viewer. The lawman is as flat as a character in a serial, but the gun is rendered in three dimensions, and the shadow of its barrel slashes across the rest of the image. It’s an extrusion into the consciousness of the watcher, and a reminder that screen violence, while imaginary, has real psychological effects.

The gun and the hand of the sheriff (and the beer bottle atop the television) were all fashioned with a tool that doesn’t appear in art galleries all that often. Macauley Norman has drawn these items with a 3-D pen, which, if you’ve never used one, is something like a glue gun loaded with colored paste. It creates squiggles of quick-drying plastic and produces a bird’s-nest effect of fine and sharply angled lines.  In the hands of an artist, it’s as dynamic as any other sculptural tool, but 3-D pens are also often given to creative children as toys — and that’s very much in keeping with the tone of “Cryptic Clutter.” Sometimes Norman’s bundles of 3-D lines have the density and texture of uncooked ramen; sometimes they’re as chaotic as silly string, and sometimes they’re as delicate as a lacewing.

The artist applies the 3-D substance right on the surface of his paintings, but he also uses the device to create some inactive action figures of his own. He gives us a roomy, laced-up sneaker, a few beers (naturally), a delicate, vibrant-colored duck. These are the sort of things you might find in the same cramped but comfortable back room where a chess player is in contemplative action and the television is blasting a western: kicked-off footwear, a Coca-Cola, a friendly decoy, a bright yellow Maneki-neko, its paw bidding good fortune to show.

Because he’s so dexterous with the 3-D pen (check out his lovely rendering of a Chinese koi and dragon), he’s able to bestow some genuine dignity on these quotidian objects. In so doing, he puts forth a defense of the world of the introvert, guarded, quiet, semi-private and shy, busy with tokens of geek culture, and maybe some strategically selected pornography. While the more energetic among us like to tease the denizens of rooms like these, it’s harder to dismiss hideouts when there’s something genuinely terrifying to hide from. To its credit, “Cryptic Clutter” demonstrates that retreat isn’t an escape: demons peek out at us from the books we read and the shows we watch, and no fortress made of comic books can deflect a speeding bullet. But Macauley Norman knows something that the rest of us are coming to realize. If you’re going to have to duck into a spider hole for a while, you may as well make it a fun one.