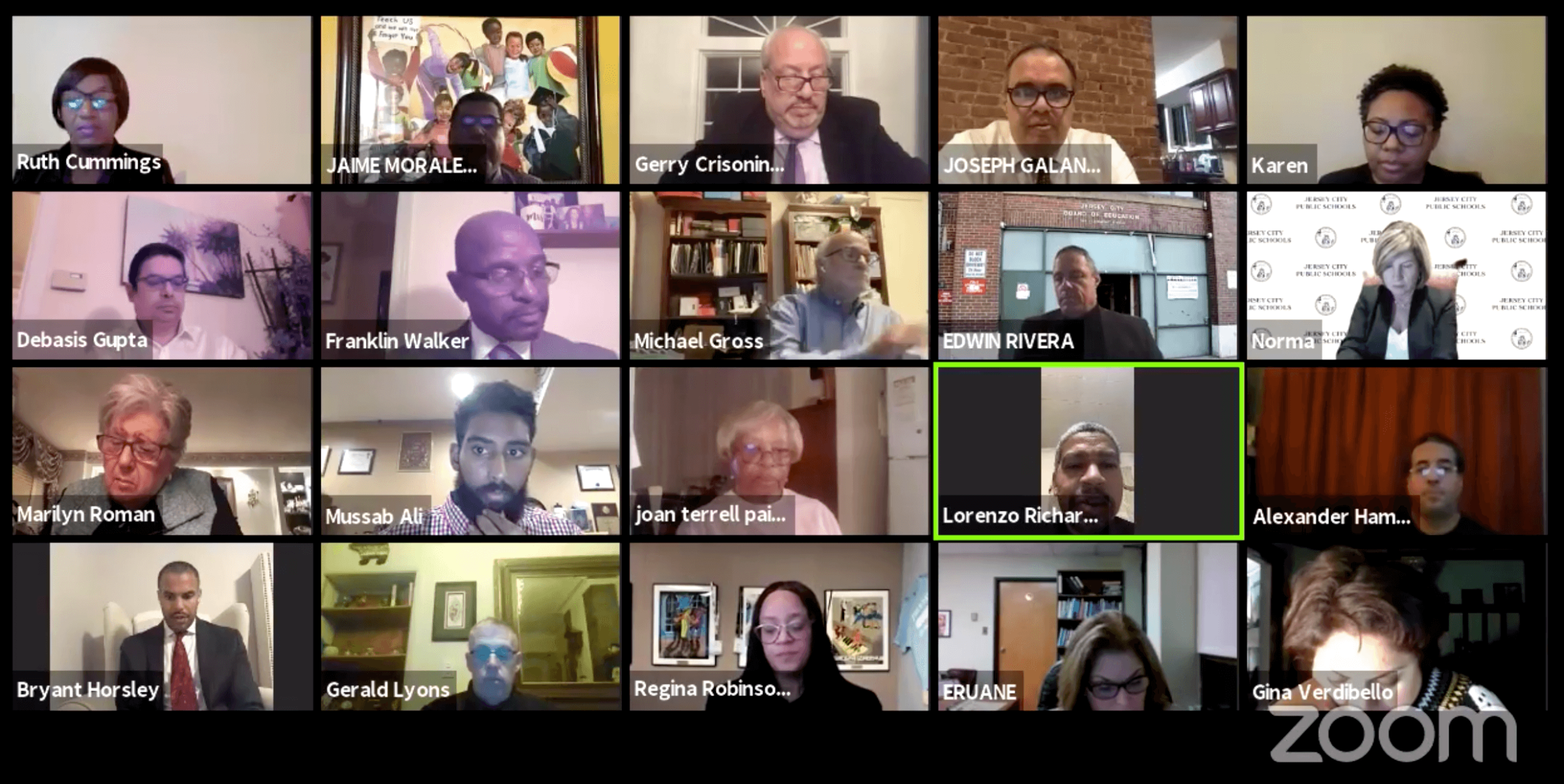 A looming budget deficit and the postponement of a reopening of schools took center stage during Thursday night’s monthly meeting of the Jersey City School Board.

Superintendent Franklin Walker presented his Superintendent’s Report, which dealt mainly with Covid-19’s impact on the district’s current $670 million budget. Walker forecast a $5-$10 million budget surplus due primarily to pandemic-related savings on overtime, on extra compensation and on goods. He said the district remains underfunded compared to New Jersey law, which calls for a $900 million budget for the 2021–22 school year. Instead he said next year the budget will be approximately $750 million and that he expects the district to have a $300 million deficit.

Walker attributed the anticipated $300 million shortfall to several factors including a $30 million cut in state aid. Revenues from the city’s payroll tax will offset some of the deficit. Walker alluded to unspecified cost-saving measures the district could take so as to not have to cut staff. Further information on the budget will be presented at the November school board meeting.

Addressing Walker’s presentation, Trustee Mussab Ali said, “Right now I don’t think it makes sense for us to make a promise like saying there will be no layoffs.” Trustee Marilyn Roman commented that she did not “know how they could possibly run the school district with any fewer people than we currently have in the classrooms” and that the city should be looking to Trenton for help with this area in particular.

Walker also discussed the district’s Covid-19 reopening plan. Given a recent statewide uptick in Covid-19 hospital admissions, given that four Jersey City teachers recently tested positive for the virus, and given difficulty securing enough teachers willing to teach in person for the immediate future, he recommended that all classes remain remote until at least the end of the second marketing period on February 2, 2020. The structure of those classes would not change before then.

There were 16 speakers for the public speaking session.

One parent of a student at PS 3, who opined that the pandemic will take months and months to abate, suggested Jersey City schools adopt a hybrid model. He said private schools have reopened with positive feedback from students and staff. Parent Catalina Perez agreed and brought up the difficulties that remote learning pose for single parents. Perez recommended a hybrid model to help working single parents whose friends and relatives may be able to babysit but don’t have WiFI. Calling upon the board to open the schools as soon as possible, she said the trustees had already had months to prepare. Crystal Thomas also spoke on behalf of parents who need to return to work.

Other parents lobbied for the alternative.

Kristin Hopkins-Clegg, who has two children at PS 5 one with an IEP (individualized education plan), wanted to share positive experiences and provided examples.

Board president Lorenzo Richardson acknowledged the plight of single parents during the pandemic help and assured the public that he will address the matter with Mayor Fulop soon. He said that when the schools open, all students will not be able to return at once.

Melissa dos Santos and Elizabeth Iannitelli, who are Social Studies Supervisors in the Curriculum Department, made a presentation on the Armistad Mandate, a 2002 state law “to promote a wider implementation of educational awareness programs regarding the African slave trade, slavery in America, and the many contributions Africans have made to American society,” according to the Armistad Commission’s website. Dos Santos and Iannitelli said the city’s schools are indeed aligned with the mandate.

All of the agenda items to be voted on during the meeting including Walker’s recommendation that district classes remain remote were approved.

The next virtual Jersey City School Board meeting will be held Thursday, November 19, at 6 p.m.

Former Board of Education President Indicted by Feds
Scroll to top