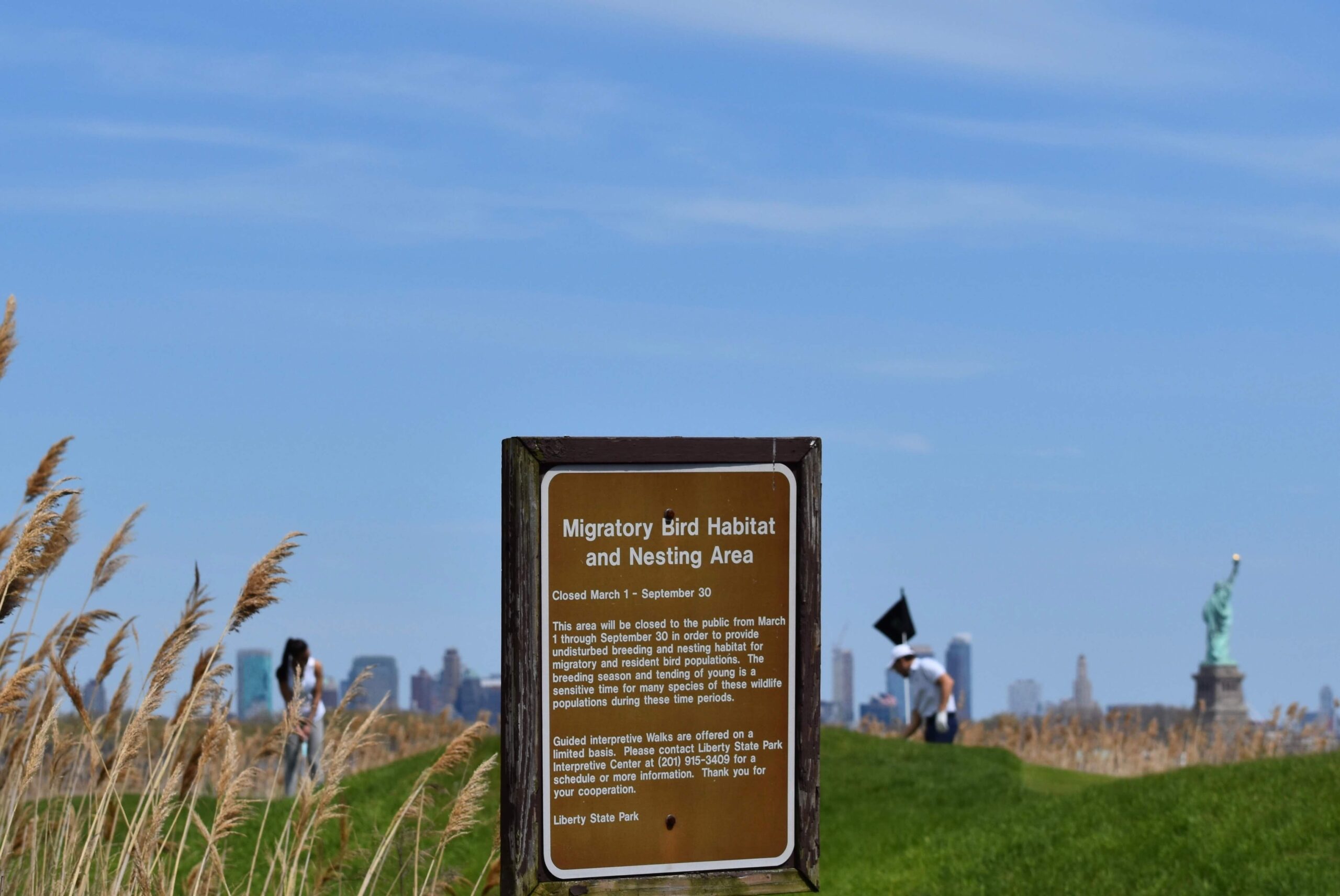 Jersey City Councilman Jermaine D. Robinson scheduled a “Ward F Community Conversation” on Thursday for Bergen-Lafayette residents to voice their concerns on the Liberty State Park Protection Act. Instead, the Ward F community meeting sparked controversy when the roughly 200 community members attending the virtual event had their audios muted and the meeting’s moderator Arnold Stovell, panelist Bruce Alston, and Councilman Robinson were the only ones permitted to speak. Still intent on being heard, many of the silenced attendees held up makeshift signs to their screens for the three speakers (and for one another) to see.

“Tonight, I’m going to ask everyone to be respectful, but I want all three sides of truth and honesty to come out,” Councilman Robinson said. “I believe Liberty State Park is the best park in the world. I believe it should be for all of the people. I want everyone respectful so that all of our voices can be heard to come to some kind of happy medium. I want to hear what the community has to say.”

“How is this a community conversation when only three people speak?”  community member Ryan Moser wrote in the meeting’s chat room.

The Jersey City Council meets next week to vote on whether or not to support the Liberty State Park Protection Act. This would prevent further privatization of the park’s 1,200 acres, some of which already house the Liberty House restaurant, Liberty Landing Marina and Liberty National Golf Course owned entirely by billionaire Paul Fireman. Among its protections would be the Caven Point Peninsula, a wildlife estuary that lies next to the course. The protection act would extinguish Fireman’s proposed plan to extend his golf course and turn Caven Point into three golf holes with a spectacular view of the New York Skyline to lure PGA golfers.

“The fear of those who are accustomed to the status quo are putting forth a story that suddenly it’s going to be privatized,” Stovell said. “We’re talking about a state park meant to be enjoyed by the citizens of New Jersey. Jersey City is one of the most diverse cities in the country.

There’s no reason one set of people should be making the decisions.”

The issue of privatization has to do with selling off parcels of Liberty State Park to the highest bidder, and the protection act would prohibit further privatization to protect Caven Point Peninsula’s wildlife refuge. Alston seemed to confuse the wildlife refuge with areas of the park that he said are contaminated and in need of remediation.

“I’m going to keep saying this: New Jersey is the only place I know that will pass legislation to protect contaminated land,” Alston said. “I’m not saying give anything to Liberty National (Golf Course). I never had a conversation with Liberty National. When it held the Barclays event, we believe black people were shut out from vending opportunities and jobs to have that PGA event. I have no relationship with any developer or Mr. Fireman.”

One community member held a sign, “How much is Fireman paying you?”

“I haven’t received a dime from him,” Stovell said in response. “People were making it seem that because he has money, his intent is to take over the park. Aside from the fact that’s really ridiculous, what’s more important is the association of all people with money being bad. The things that he has offered to do would benefit the community. I’m seeing things with other billionaires that are helping the community. You need a millionaire or billionaire to get something done. We need to stop this nonsense that there’s a push by Fireman to privatize the park. It’s coded racism.”

Viewing the meeting, DK said, in the chat room: “Such BS. Suddenly the answer to racial equality is an expanded golf course?”

Evelyn Ibarra of Jersey City expressed her opinion in the online chat room: “This is a huge outrage, this entire meeting.”

Stovell brought up the 1977 master plan for Liberty State Park that was created with input from community groups. Since then, all that’s changed, he said.

“What was the sense of having a master plan if it never was going to be followed, never going to be implemented,” Alston added. “The 1977 master plan promised people of Jersey City retail shops, restaurants, ball fields, and tennis courts. This park is big enough to have everything. If it takes public-private partnerships to get it done, that’s something we need to explore.”

Meanwhile, there have been several additions to Liberty State Park since the 1977 master plan, was written, notably the Liberty Science Center, which was built in 1993.

Alston said forcing Ward F residents to accept the Liberty State Park Protection Act without their input was a “Trump-like moment” and referred to a comment by right-wing commentator Laura Ingraham who told NBA star LeBron James no one cared about his political opinions.

“Our community needs to have the opportunity to state what we want to have inside Liberty State Park,” Alston said. “There should not be any legislation proposed until legislators come to Jersey City. This is the systematic marginalization of black and brown people. I was very disappointed with Assemblyman Raj Mukherji. He was going to support some type of legislation. Assemblyman Mukherji, Senators (Loretta) Weinberg, and (Brian) Stack, you need to review that master plan before we decide anyone passes legislation. You’re going to push something on Black people and then say Black Lives Matter. This is what is being said: ‘Shut up and dribble’.”

Some supporters Friends of Liberty State Park protested that Sam Pesin was not part of the event even though the flyer advertised him as a panelist.

“We invited Sam, but he did not want to be a part of it,” Stovell said. “So, I left it alone. Basically, it’s not about Sam, it’s about this community having this conversation.”

Pesin did attend the virtual meeting and later said Stovell barred him from speaking.

“I never indicated I was not going to the meeting,” Pesin said. “They totally lied by saying I refused to participate. Then they muted me and blocked me from writing anything in the chat room. The meeting was a sham. Last night they expressed a lot of distortions, falsehoods and lies.”

Pesin clarified the confusion about Caven Point and Alston’s description of it as contaminated land. He said the New Jersey Department of Environmental Protection (NJDEP) does not require any further remediation of Caven Point which was cleaned up in 2004. If Fireman does a land grab of Caven Point for a golf course, golf is an active recreation and the land would need remediation if golf holes are put there, Pesin said.

“Caven Point is a priceless, natural habitat,” Pesin said. “The sign at the entrance states it’s a, migratory bird habitat and nesting area. It’s also an urban, environmental education resource. Over 600 students a year go out there for programs, and it’s a nature sanctuary enjoyed by a few thousand people a year for bird watching and for families to enjoy a peaceful place.”

Local historian and former vice president of the Friends of Liberty State Park Mandy Edgecombe attended last night’s virtual meeting, but her audio was muted, too.

“I was muted, and the chat was disabled the entire time except for the end,” Edgecombe said. “Then you saw it explode. They turned it off after five minutes.”

You could see through the lies, Edgecomb said of the meeting last night.

Edgecombe said she doesn’t understand why Fireman would want to destroy Caven Point to install three golf holes when he already has a hole right behind Caven Point.

“He has a hole, he just wants more,” Edgecombe said.

There was no clear reason why the meeting ran 1 1/2 hours and yet no community members were invited to speak. The flyer stated the Zoom meeting would be from 6:30-8:30 p.m., but it ended at 8 pm. In order to have the 200 meeting attendees speak—it was billed as a community conversation, after all—Robinson could have extended the meeting to hear what they had to say since this was his original intention when he asked the City Council to table the protection act resolution.

“It was this conversation between two people trying to flood our communities in Ward A and  Ward F with lies,” Edgecombe said. “Most of their platform that the south side of Jersey City is voiceless with Liberty State Park and their concerns are not listened to, is just an attack. The voices of the south side were on that meeting, and they were holding up signs. People had to hold up signs on their videos on the Zoom chat to be heard. It was like a protest. Everybody on the meeting said our voices are right here, we see through this, we see there’s some kind of agenda. It was a complete sham. They did a really good job of embarrassing themselves. They have no platform. No valid claims. They did not invite the DEP when their questions were for the DEP What are you pushing here? You want the south side to have a voice, but all you’re doing is attacking people and not saying anything valid or getting anything done. Jersey City doesn’t swallow pills that easily.”

The City Council votes on the Liberty State Protection Act at its next virtual meeting held Wed., July 15 at 6 p.m.