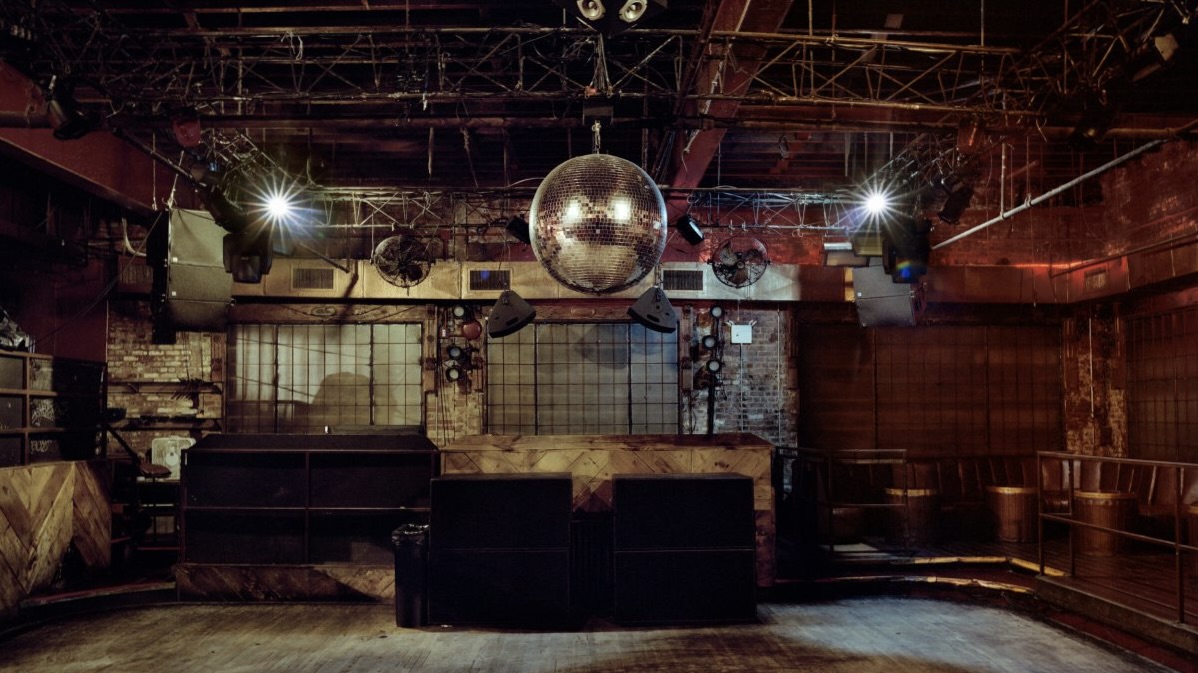 In Jersey City, renovation is often a scary word. Businesses that close for renovation sometimes get lost in the mist and never reopen.  Others come back weakened, or changed for the worse.  The winter and early spring period of repose at MANA Contemporary (888 Newark Ave.) was worrisome: an institution that bewildered many locals was suddenly in limbo. A new creative team had taken the helm. Could they come up with a show worthy of the post-industrial grandeur of the setting? 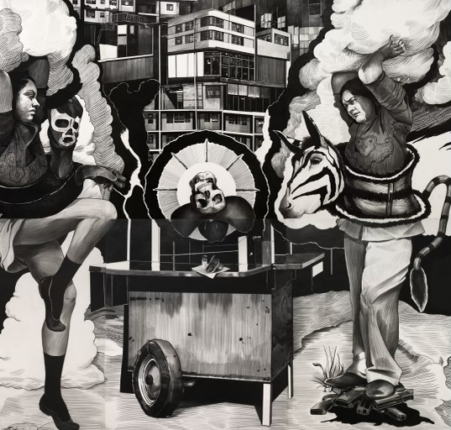 I’ve just come back from the sneak preview of “Land of the Free,” the promised spring exhibition at MANA, and I’m pleased to say that the answer is a resounding yes. New creative director Kele McComsey and guest curator Irene Mei Zhi Shum have put together a shattering show that lives up to the highest expectations of what MANA Contemporary can be, and makes effective and immersive use of the building’s first floor galleries. While they still might be reluctant to call themselves one, MANA has never felt more like a museum than it does right now. I’ve seen every major gallery show mounted in North Jersey this year, and many of them have been quite good. “Land of the Free” is better. There’s no need to be shy about it: MANA has become the best and most interesting visual arts institution in the Garden State.  You are strongly encouraged to check it out for yourself at the Open House on Saturday, May 14, from noon until six p.m.  It’s free.

McComsey was the curator of “Implied Scale,” a 2021 exhibition that attempted to grapple with the terrifying reality of climate change and habitat destruction.  With its footage of warring ants, sound of cracking glaciers, massive line drawings of trash heaps, and stomach-churning video of California on fire, the show went straight for the jugular. “Land of the Free” is similarly gutsy, and similarly topical. In sculptures, etchings, charcoal, and paint, the exhibition confronts migration and American identity — and then pushes farther, asking questions about labor, human cruelty, the necessity of borders, and the turbulent relationship between the United States and its neighbors to the south. Many of these pieces are black and white or rust-flecked grey: remarkable line drawings, and savage little sketches heavy with disappointment, and statues fashioned from amalgams of metal junk. There’s a real border-town vibe to all of it, a feeling of desert starkness and emotional desiccation, and the residue of coercive acts performed on the national margins. Like biting into a a chili pepper, it’ll clear your nostrils.

The sensation of the show is Tijuana artist Hugo Crosthwaite, whose “Borderlands” includes a roomful of small, explosive sketches of scenes from an enhanced version of the artist’s hometown, wild, wall-sized acrylic paintings choked with Mexican signifiers and pregnant with foreboding and whispers of violence, and a vibrant wraparound favela sketched all over the surfaces of a large room. This last piece is a work in progress, and Crosthwaite has already declared his intention to paint over it when he’s done, which just about makes me cry. Its concatenations of hovels and stacks of buildings disintegrating into howling white space suggest runaway growth made real: human habitation viewed as trash, disposable, ignorable, yet undeniably beautiful. “La Apoteosis de un Taco,” a twenty-one panel mural, is so loaded with fascinating detail that it could take a week of staring at it to begin to unpack its meaning. Here are Tijuaneros engaged in a near-mythological struggle against the perils of their own identities, treading on guns and blood, grappling with clouds, standing firm in the shadow of a cresting wave of block-like buildings, orbiting a upside-down skull in a bullet-bedecked mandala at the center of the massive piece.

Crosthwaite has also collaborated on a wall drawing with Houstonian Vincent Valdez, whose etchings in “En Memoria/In Memory” are every bit as detailed, energetic, and pointed. His images capture border-zone callousness, foregrounding disregard for the humanity of immigrants, and exposing the United States, and Southern Texas in particular, as a frighteningly unwelcoming place to outsiders. In one, a half-mast American flag droops, embarrassed; in another, a runaway toy train with a psychotic expression on its Tank Engine face charges across the Rio Grande. A guard dog with bristly fur and hooked incisors barks a warning from the lower left corner of a mostly blank page, a border patrolman re-routes hopeful entrants, flowers grow, apologetically, from the remains of an unknown traveler. By June 11, Valdez will hang twelve silk-screened tapestries of faces of disappeared Latin Americans from the ceiling of an adjacent gallery.  Two are already up.  They’re ghostly enough to drift straight into your dreams.

Then there’s Joe Minter’s wonderfully brutal assemblies of welded, rusted metal parts: wheel casings, murderous-looking hooks, spades and spears, pickaxe heads and looped chains and locks. Each one stands about the height of a small man, and many of them do resemble men — human beings trapped in bondage and compelled to work long hours under the sun, reduced by labor to tskeletons of hooks, wires, and girders. There’s a long Hudson County tradition of anthropomorphizing garbage and teasing out the personality from industrial byproduct. Minter is from Alabama, but longtime followers of Jersey City art ought to feel right at home with “We Lost Our Spears.” 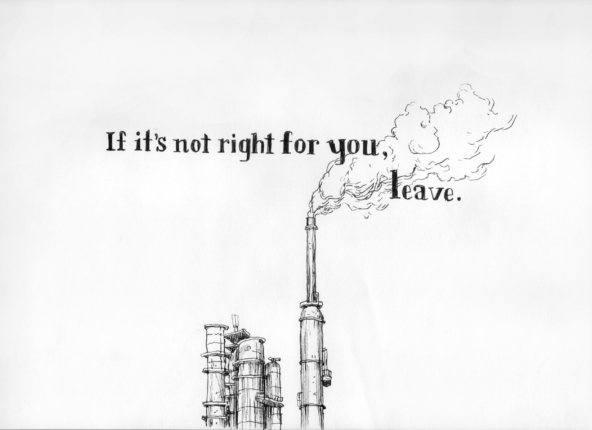 That’s important. MANA has sometimes felt like a New York City institution that caught a flat on the way to the tunnel. “Land of the Free” is the first MANA show that’s fully continuous with the attitude and aesthetic of the Garden State. “Anonymous Architectures,” a Monira Foundation-curated show that opened on the sixth floor, also features a staple of Jersey exhibitions: the abandoned building. Lauren Silberman takes her camera inside pandemic-shuttered nightclubs, including Pete’s Candy Store and Union Pool: curiously still rooms waiting to be reinvigorated by rock and baptized in soundwaves. Alexa Hoyer’s shots are even sadder. They’re pictures of high-end New York City storefronts, boarded during the height of the Black Lives Matter protests. Hoyer gets great aesthetic mileage from the juxtaposition of lavish marble and unadorned plywood.  A shuttered Hermes store becomes an accidental message of from the gods — the progenitor and guarantor of art, medicine, and intelligence, temporarily out of business.

Assisting McComsey and Monira in the effort to bring MANA Contemporary into better alignment with the Hudson County arts scene is Kristin DeAngelis, who has been named Director of Community Outreach. It’s a great hire. DeAngelis ran the sadly shuttered 107 Bowers Gallery in the Heights, she was an organizer of the Art Fair 14C, and she curates two ground-floor spaces in Silverman buildings Downtown. She’s pretty new at MANA, so it’s hard to know whether she had any influence over the improved signage all over the building, including an actual list of exhibitions on the wall of the hall leading to the galleries and highlights of each floor advertised in the elevator.  At MANA Contemporary, they’re still much better at selecting and curating art than they are at letting people know that art is there.  But they’re getting the hang of it.