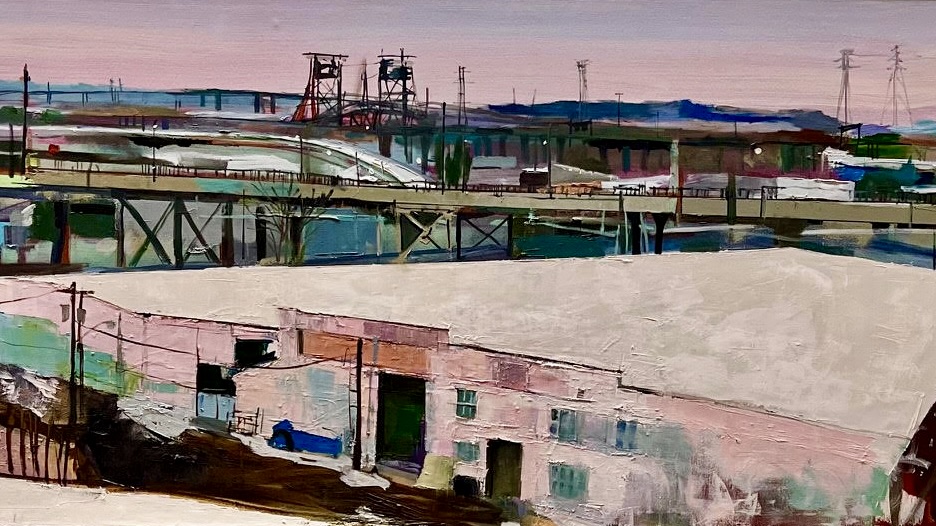 Eunju Kang paints flowers, and she does so beautifully.  Her delicate prints and watercolors — bright and tiny illuminations in spring green and lemon yellow on cream-colored paper — were highlights of Art Fair 14C. Drop this born naturalist and keen observer into the wilds of Jersey City, though, and she’ll be compelled to turn her paintbrush to another kind of growth: the tangle of roads and railways that stitch the West Side of town to the industrial zone of Kearny and the counties beyond. Suddenly the modest poet content with representations of the small and delicate becomes a widescreen rhapsodist.

The large oil paintings of views from her studio in the Tops Industrial Building share a sense of balance and richness of color with her floral prints. Beyond that, we’re in completely unexpected territory here. In “Studio 1,” Kang captures the curve of the rail tracks as they slink away toward Essex County, the iron cages of the train bridges, the smokestacks disappearing into the winter mist, the snow on the roofs of single-story concrete buildings, the fragility of the power lines, as thin and as subject to stiff winds as any flower petal.

In “Studio 2,” the two black towers of the Wittpenn Bridge form a crown atop a broad, squat warehouse, pink in the morning light, its front door thrown own but revealing nothing within. These are dramatic paintings, full of Hudson County energy, powered by thick, muscular brushstrokes and daubs of bright color amidst the black lines of the steel crossbars. They hold up well to the works of artists who know the territory: the Skyway lyricist Tim Daly, the Powerhouse illustrator Loura van der Meule, and Edward Fausty, photographer of the Warehouse District. Kang may still claim a New York address on her CV, but anybody can see that New Jersey’s got her.

Where the Travelers Meet by Lana Abraham-Murawski

The two “Studio” canvases are highlights of “Transport,” a dramatic show that’ll be on view in the first floor lobby of the Hamilton Square Condominium (232 Pavonia, right off of Hamilton Park) for most of the rest of the 2022. Eunju Kang shares the bill with two other painters who know how to set a canvas aswirl, and who are, as you’d expect from artists in Jersey City, accustomed to rolling around on wheels and rails — Lana Abraham-Murawski and Heather Williams. They’ve taken the theme seriously, but they’ve bent it to suit their proclivities. Abraham-Murawski, whose work can be whimsical, gives us a friendly pink and blue grasshopper behind the wheel of a bug-like car on a highway. Williams tucks at least one subway schedule into the layers of her gorgeous assemblies of paint and ripped paper. The torn sheets and thick pigment on Williams’s vibrant pieces evoke the feel of a busy streetcorner, and their palimpsests of wheat-pasted posters, some scraped away, some barely legible, signifying the city in transition.

The woman on the move, though, is curator Kristin DeAngelis. After four years and twenty-five exhibitions at Hamilton Square Condominium and the Majestic Theatre Condominium (222 Montgomery), she’s presenting her last show in these two spaces. DeAngelis has crossed town to handle community outreach for MANA Contemporary — a job she’s already been doing for a while. I’d call this an inspired move by MANA, but it’s more accurate to call it an obvious one. Nobody in Jersey City visual arts has worn more hats than DeAngelis has: in addition to her regular exhibitions, she’s also been a local dealer, a teacher, and Deputy Director of Art Fair 14C.

Most importantly, she’s run her own spot.  She was the prime mover behind 107 Bowers, an independent gallery on a residential street in the Heights that wasn’t dissimilar in feel to SMUSH or Deep Space. 107 Bowers closed its doors in 2019, but DeAngelis, er, transported the energy and mission of her space to the lobbies she’d been hired by the Silverman Group, redevelopers of both properties, to elevate.  This was no easy task.  Hamilton Square and Majestic are pretty buildings, but they aren’t art galleries.  Most of the people who pass through those spaces aren’t looking to be confronted by pictures: they’re parents, or commuters, consumed with quotidian thoughts.

To her credit, DeAngelis always resisted the urge to be purely decorative. Instead, she figured out how to push just enough to leave an impression. Not every show she mounted at the two Downtown spaces worked as well as “Transport” does, but she maintained an extremely high batting average under tricky conditions, and she’s going out with a bang. “Transport” might be the quintessential Kristin DeAngelis show: it’s very pretty, it leans toward abstraction but contains plenty of figuration to ground a casual viewer, and it’s energetic enough to enhance the caffeine buzz of a traveler scurrying off to work.  It also reminds passersby — those who might be a bit unmoored in the blur of modern living — of exactly where they are.  They’re in urban New Jersey, a place with its own peculiar rhythms, and color palette, customs, sights, and invisible vibrations.

With DeAngelis on the other side of the palisade and consumed with MANA duties, Shamona Stokes and Deep Space will take over the curation at the two Silverman properties. Stokes has already worked with DeAngelis on “Fresh Air,” the show that introduced the crew at Elevator JC, the Erie St. studio building, to the public. That was a successful pairing and an entertaining show, although it might have been a little bossier than those we’re accustomed to seeing from DeAngelis alone. Shamona Stokes has been doing an admirable and enthusiastic job of community-building at Elevator, and she’s one of the most consistently intriguing artists in town. But while her work is superficially adorable, her vision is considerably darker than DeAngelis’s.  Similarly, the principals at Deep Space are the exemplary local gallerists, but their taste for pop culture and street art might make them a funny fit for a pair of condominium lobbies. They’re logical successors. But they’ve got a challenge on their hands — and big shoes to fill.