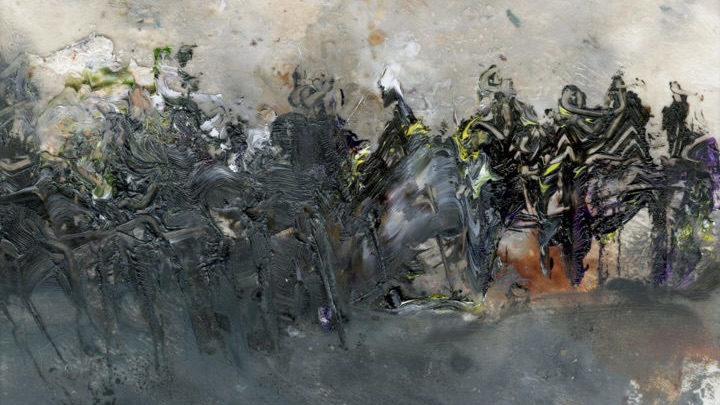 What does a picture of trouble look like? How does a non-figurative artist bring a feeling of danger, drama, and turmoil to the canvas?  He might take a purely formal approach, and aim to provoke his viewer with clashes of color and shape: smoky grays and savage eruptions of crimson, turbulent brushstrokes, swirls and scrapes and jagged edges. Or he might affix text to his images and hang on them proper nouns meant to instill a sense of dread.  Or, if he’s feeling bold, he might simply rely on the innate disquiet within the mind of the spectator.  He may decide that we’re all haunted, plenty, by the times we live in. All we really need to scare ourselves silly is a little push. 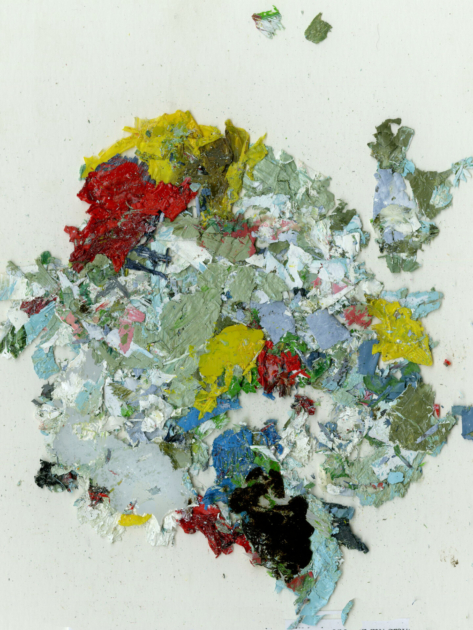 Jim Fischer isn’t an abstract artist.  He may be best known for his colored-pencil streetscapes of the tonier neighborhoods of Brooklyn.  Very little of the prior work he’s done is unsettling.  But in “Imagination: Serendipitous Reality,” his latest show, he pushes deeper into the murk and mist than he ordinarily goes.  He’s returned with a series of tiny apocalypses; small canvases of happy accidents, assembled from the spillover of other artworks, massaged into monstrous shape by an inspired miniaturist with a will to spook.  To make “Imagination” sing, Fischer uses all three of the techniques I described above. But he leans hardest on the third.  He’s betting that you’ll be able to feel the trouble brewing in his remarkable little paintings, some barely the side of a postcard, before you even notice his methods or read the captions. Time and again, he wins that wager.

Not everything in “Imagination” is dark.  There are breathy impressions of geishas in mid-dance, accidental flowers in bouquets of blossoming colors, a brilliant red “Die Fledermaus” on a tiny canvas (okay, maybe that one is a little dark).  But most of the show lays Fischer’s preoccupations bare, and while the artwork is invariably pretty, the ideas sure aren’t. He gives us the Ghost of Christmas Future, the Grim Reaper, specters from the Book of Revelation, a doomed butterfly.  Some of this is tongue in cheek.  But a lot of it is simply a reflection of the world as it is, which, you may have noticed, is something of a mess. Fischer, returns, often, to scenes of war: the streaked ochre sky over Hiroshima, the churning Charge of the Light Brigade, the desolate trenches of WWI, coils of barbed wire and distant, menacing infantry. Joseph Stalin is namechecked; Napoleon is, too.  That these little disasters were suggested to the artist by happenstance does not dull their edge one bit.  In belligerent 2022, no Rorchach-test reader would fault him his fatalism.

At its best — and this excellent show sustains a high-level hover for most of its length — “Imagination” is a reminder of the explosive alchemy between words and pictures, and the uncanny way that titles work to focus and fix meaning. Technically, an image on the wall is nothing but a curved paint-smear in grey, flecked with streaks of yellow and pressed under glass.  But once Fischer has named it after Dickens’s ghost, it’s impossible to see it as anything else.  The wiggle in grey takes on all the properties of a specter: the hunched posture, the hooded head, the seductive, beckoning quality, the wispy menace. How much did Fischer enhance the original accident?  Does it matter? 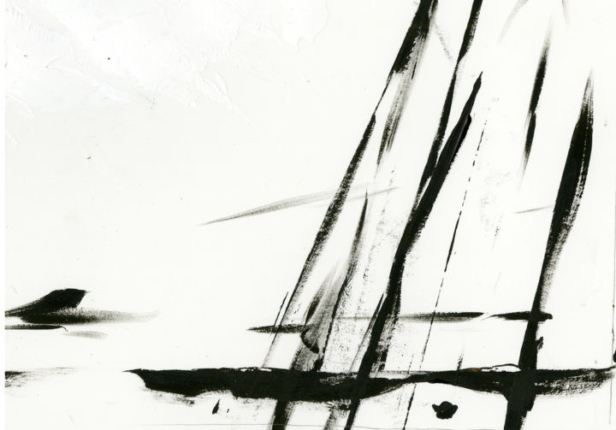 “Imagination” will hang at IECC Casa Colombo (380 Monmouth) through the end of the month. While the subject matter isn’t always happy, the occasion certainly is.  The exhibition is the first to be held in the pretty second-floor space in two years.  Fischer is well suited to be the baptist at the gallery’s rebirth: he was the guiding force behind many of the gallery’s online activities during its period of closure, and he curated the “Imagination” show himself.  But it’s his knack for revelatory storytelling that truly makes him a fit for a visual arts institution that shares a brownstone with a local history museum. This is a man who, through an amalgam of words and images, can coax a boat race out of an assembly of black lines and suggest the play of moonlight in a garden through blotches of white paint.  He’s here to conjure significance where there was none — even if that significance turns out to be the stuff of nightmares.

(The Gallery at the Italian Education and Cultural Center Casa Colombo is open on Tuesdays and Thursdays from 10 a.m. until 4 p.m. and on Saturdays from 12 p.m. until 5 p.m. “Imagination: Serendipitous Reality” shares the space with another show: “Short Stories” by Tharanga Goonetilleke.”  Look for a review of that one soon, and visit www.casacolombo.org).