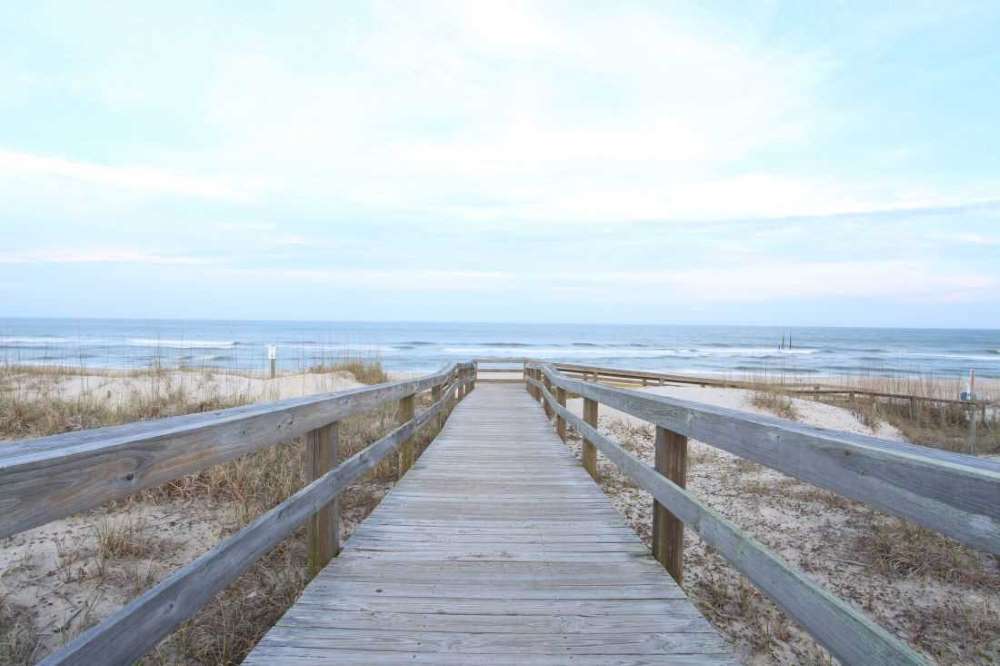 Sustained by tourism, many Shore communities have seen off past crises. What’s in store for them in a summer season overshadowed by the pandemic? And, what are the stakes?

New Jersey’s beach towns prepare for a summer season like no other.

For the bulk of the 41 municipalities stitched up and down the Atlantic coast, from Sea Bright to Cape May Point, the 15 weeks between Memorial Day and Labor Day are crucial to the survival of their economies. And not just for the towns themselves — nearly half of the state’s $46.4 billion in tourism spending is generated by the four counties that encompass the Jersey Shore. 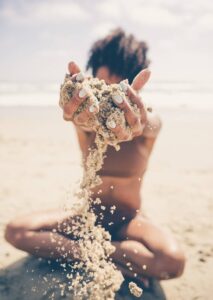 Photo by Jakob Owens on Unsplash

Statewide, travel spending for the first four months of 2020 has dropped by 87%, compared to last year, according to the U.S. Travel Association and Tourism Economics. In a report released Thursday, the state projects that 2020 will see tourism spending decline by about a third from 2019. With an economic window as narrow as that of the Jersey Shore’s, many town mayors have reached the critical moment in which they must figure how to begin reopening in order to salvage the livelihoods of seasonal businesses without risking the lives of residents and visitors.

On Tuesday afternoon, after weeks of regular discussions with the governor’s office, the Cape May County-Wide Recovery Initiative, a coalition of freeholders, mayors and business leaders, submitted a formal reopening plan to Gov. Phil Murphy — a first among the Shore counties.

The 35-page document proposes a “progressive reopening” over the next several weeks, with full access to boardwalks and beaches, as well as reduced-capacity opening for indoor and outdoor restaurants and nonessential retail beginning on June 1. According to the report, Cape May County is uniquely vulnerable to a collapse in the tourism economy — in 2018, the industry created 26,572 jobs, and over 23% of the population is directly employed in retail or food service and accommodation.

In a joint statement, the mayors of Avalon and Stone Harbor, located on the county’s 7 Mile Beach island, said that they would open their beaches for “walking, running, fishing and surfing, from dawn until dusk” on Friday, May 8, but that “stationary activity” would remain unallowed. “The beaches will be patrolled to make sure that social distancing practices are followed and there are no large groups of people gathered,” the statement went on, adding that if the rules are not followed, “we will again close our beaches.”

Asked whether they are prepared for an increase in COVID-19 cases should the county’s beach towns reopen, Brian Cahill, spokesman for Shore Medical Center, said, “We have been preparing for an influx of COVID-19 patients since the beginning, and our staff has done an incredible job. We currently have seventy isolation rooms and we can add more if necessary.” With regard to the county’s recovery initiative, Cahill said the hospital is “continuing to follow the guidelines set forth by the CDC and New Jersey Department of Health.”

In nearby Wildwood, where access to the beach has remained open, Mayor Pete Byron, along with North Wildwood Mayor Patrick Rosenello, announced that the boardwalk would also be opened on Friday. “It is now time for us to begin thinking about how to move forward and allow residents, second home owners and businesses to begin trying to return to some form of normalcy,” Rosenello said in a statement.

On Long Beach Island, where the beaches have also remained open, officials said municipal parks and bathrooms will open on June 1. Katlyn Kerlin, secretary to the Long Beach Township mayor, said that due to the shutdown, their beaches, which make up the majority of the island’s public shoreline, have seen higher than usual visitor numbers. “We’ll begin issuing beach badges early, on June 1, as opposed the regular start date of June 15,” she said.

At the northern tip of the Shore, in Sea Bright, officials are planning on opening the seawall and parking lots at half capacity for Memorial Day. (The beach has been open the whole time.) “Then we’ll just wait and see if we can open the bathrooms, etc., as per the governor,” borough administrator Joseph Verruni said in an email.

In Thursday’s coronavirus briefing, Gov. Phil Murphy confirmed that the Shore municipalities are “one of the high priority areas,” but insisted that guidance from the state is necessary and will come soon. “I don’t begrudge Cape May County for trying to lay a plan out,” he continued. “Tourism is a huge part of their economic reality — we respect that, understand that, and we want to do everything we can, responsibly, to support it.”

The next — and far more challenging — step that Shore towns must confront is how to reopen retail and food service businesses, hotels and amusement parks — all of which are vital to municipalities’ survival, especially their ability to pay their quarterly property taxes. As of last month, $9.4 million in local taxes have been lost since the pandemic began. (Murphy’s executive order 130 allowed municipalities to effectively push back the May 1 due date to June 1.)

“The best information we’ve been able to gather is that [reopening] will be done on a percentage,” said Byron, noting that the reopening of retail and food service businesses is a decision that rests with the governor. “For instance, if you have a bar or restaurant and your capacity is 50, maybe for the first couple months, say through Memorial Day into the middle of June, you can only use 50% of that.”

Byron and Rosenello have both passed ordinances to allow businesses with adjoining parking or otherwise empty lots to expand tables there, as long as they don’t exceed their restaurants’ normal capacities. “This summer you may see your favorite restaurant with dining tables outside of their establishment,” Rosenello said. “We are working hard to make sure that our friends in the retail and restaurant business survive this unique situation.” 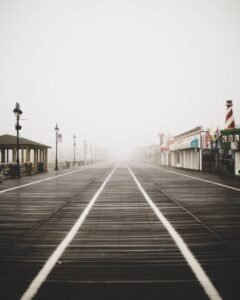 Photo by whereslugo on Unsplash

Up the coast in Ocean City, where an official determination to open the boardwalk and beaches has not yet been announced, Chuck Bangle, owner of the popular Manco & Manco boardwalk pizza shops, was nevertheless busy preparing for the day the state allows him to reopen. “We’re already working inside the stores, taking some tables and chairs out, and we’ve ordered protective shields for the cashiers and are stocking up on masks, gloves, and decontamination equipment,” Bangle said. “I believe when we get the green light, we’ll be allowed to run at thirty percent.”

For the hotel, bed-and-breakfast, and home rental side of the local Shore economies, there is the added concern of how to sanitize bedrooms, kitchens and bathrooms that, in normal times, are used by hundreds of guests and turned over within hours on the weekends. In Cape May County, the recovery task force is requesting that the state allow short-term rentals to begin on June 1, and to permit hotels to operate at full capacity starting June 22.

For John DiGenni, a real estate agent in the town of Sea Isle whose family also owns, operates, and lives in the Centennial Guest House, opening seems impossible — particularly for DiGenni, who has infant twins with his wife, who is an ER nurse. Even if the city’s mayor were to lift the ban on short-term and transient rentals were to end, DiGenni plans to remain closed. “I’ve got my family here,” he said. “It’s just too close-quarters.”

Nevertheless, DiGenni, as well as other Jersey Shore real estate agents, have seen no shortage of people from out of state inquiring about summer rentals. “Most of my people want to be here,” he said. “Telling them if they can be is a different story.”

Additionally, business owners everywhere have predicted that Americans will be reluctant to fly this summer, preferring instead to get in their cars and drive to local vacation spots like the Shore.

“I don’t think anyone, any time soon is going to want to travel on a plane or cruise ship,” Bangle said. “So they might stay local, which would be great.”

The final challenge, of course, is the impact on the Shore’s summer workforce. Tourism is the seventh largest employer in New Jersey — one in ten jobs are tourism-related — but with the state projecting visitor numbers to fall by a quarter this summer, hiring is sure to be down. “I’ve reached out to my staff,” Bangle said. “And everyone is chomping at the bit to get back to work, whether they’re 16 or 26 years old.”

For many Shore towns, like Wildwood, summer help comes in the form of international student workers through the J-1 visa Summer Work Travel Program. New Jersey has one of the highest rates of participation in the program with some 7,000 students, many of them destined for service industry jobs at the Shore. “Talking to some of the [business owners] who employ hundreds of these kids, they’re nervous,” said Byron. “They don’t know if they’re going to be able to get visas.”

Within days of the governor’s stay-at-home order of March 9, social media was alight with vitriol from residents of the Shore towns about the rush of visitors and second-homeowners from metropolitan areas hard-hit by COVID-19.

Last week, Point Pleasant approved of restricting the reopening of beaches to residents only, but Murphy said that would not be allowed, given the public’s right to shoreline access.

In Ocean City, calls to shut down the bridges were met by repeated pleas from the mayor “to not point fingers and blame others.”

Byron has also been busy fielding frustrations from his constituents. “Seventy-five percent of the people that come down here on Memorial Day weekend are North Jersey, New York,” he said. “So don’t think for a moment that you’re not going to have your locals going around, taking pictures of license plates and putting them all over social media.”

“We have to work really smart this summer, and the general public has to be smart, too,” Ocean City business owner Bangle said. “If they act like a bunch of knuckleheads, to quote the governor, they could not only shoot things back down, but, if this COVID spreads, we could lose the whole summer.”

Ultimately, it’s tourism that sustains many Jersey Shore communities — and it is tourism that will save them from economic disaster, once the state has allowed for reopening to begin. “We’re a community, from one tip of the Jersey Shore down to the end of Cape May,” Bangle said. “We’ve been through Sandy and all these other storms. So, I think we’ll bounce back, and I think people are going to come up with a lot of creative ways to run businesses — not just for this season, but for the future as well.”