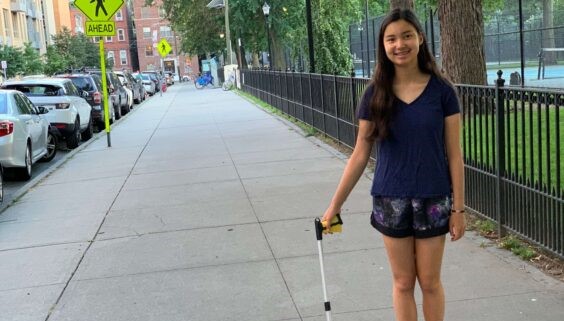 Urges Neighbors to “Adopt” a Block to Clean Up

Stuck at home due to the Covid-19 pandemic, Sage Lappas, 13, of Jersey City, and her family would often go for walks around her neighborhood. However, while most kids enjoyed the free time now spent with their families, Lappas felt disheartened. When she went for walks, she often saw trash lining the streets. The pandemic only added to it, with gloves and masks now among the litter on the sidewalk.

“One day we went outside to pick some stuff up,” said Lappas, who has lived in Jersey City since 2010. “And I just thought that other people in the community would want to also help out, so I decided to make this a city-wide effort.”

With the help of her family members, Lappas decided to take action and start “Adopt-A-Block,” an initiative that encourages residents to “adopt” a block from June 15 to August 15. By signing up, participants agree to collect and dispose of the garbage on the sidewalk. Residents use their own garbage bags, gloves, masks, and metal trash pickers and are responsible for sorting recyclables and disposing of garbage themselves.

“People are stuck with the quarantine, and families could use an excuse to get their kids out of the house. In addition, people in our community are always looking for ways to help out,” Lappas said.

According to Lappas, the reception has been overwhelmingly positive. The concerned middle schooler publicized her idea Downtown, where she lives, using flyers, word of mouth, and NextDoor, and within two weeks more than 20 volunteers had signed up; residents along Communipaw Avenue have since contacted her to express interest, too. The pickers didn’t find any strange or noteworthy items of trash but they did find a plethora of face masks, gloves, and—since New Jersey lacks a “bottle bill” requiring recycling of beverage containers—plastic water bottles. And some residents want Adopt-a-Block to stretch into the fall.

Lappas’ campaign is remarkably similar to Mayor Steven Fulop’s “Stop the Drop” initiative, a program he launched in 2013 (now on hiatus due to Covid-19) to reduce litter and provide summer jobs for kids at the same time. Lappas had never heard of “Stop the Drop.” But Mayor Fulop is aware of Adopt-a-Block, according to Lappas, and likes it.

Lappas, who will be attending Riverdale Country School in the fall, is “looking at” a career in environmental activism but right now is only pursuing Adopt-A-Block as a hobby.

“I’m doing this more as something to help my community; it’s not something I’m looking at for a career or academic purposes. It’s just about the community right now,” she said.

Photo: With the help of her family members, Lappas decided to take action and started Adopt-A-Block: a clean streets initiative that encourages Downtown residents to “adopt” a block from June 15 to August 15; photo courtesy of Sage Lappas.

New Jersey Has Spent Only a Fraction of $2.4B Federal COVID-19 Aid, Legislative...