According to newly released F.B.I. data, Jersey City saw large decreases in both violent and property crime in 2020. The only category to increase was homicides, which went up 31 percent.

Jersey City saw a larger decrease in crime than its neighbor Newark, which had previously out-performed Jersey City. Urban crime rates went down nationally in 2020 in the midst of the Covid-19 pandemic. 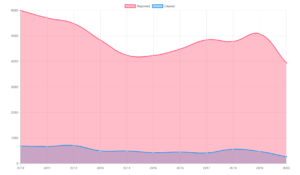 Homicides in Jersey City rose from 13 in 2019 to 17 in 2020, mirroring the national trend. In every other category, however, crime here decreased substantially, according to the data provided by Jersey City to the F.B.I.

In 2020, Rape, Robbery and Aggravated Assault fell by 27 percent, 21 percent, and 13 percent respectively. Violent crime was down by 16 percent overall.

Similarly, property crimes were down overall by 22 percent. Arson led the way with a 50 percent decline. Burglary, Larceny-theft, and Motor Vehicle Theft fell by 44 percent, 15 percent, and 35 percent respectively. 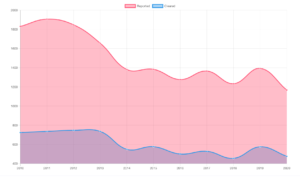 The outsized decreases represent something of a turnaround for Jersey City. From 2014 to 2019, both property crime and violent crime rose. By the end of 2019, Newark, which has slightly more residents than Jersey City, had fewer reported crimes than Jersey City.

Mayor Fulop’s press secretary did not respond to an email requesting comment.

Woman Jumps to Her Death Downtown
Scroll to top