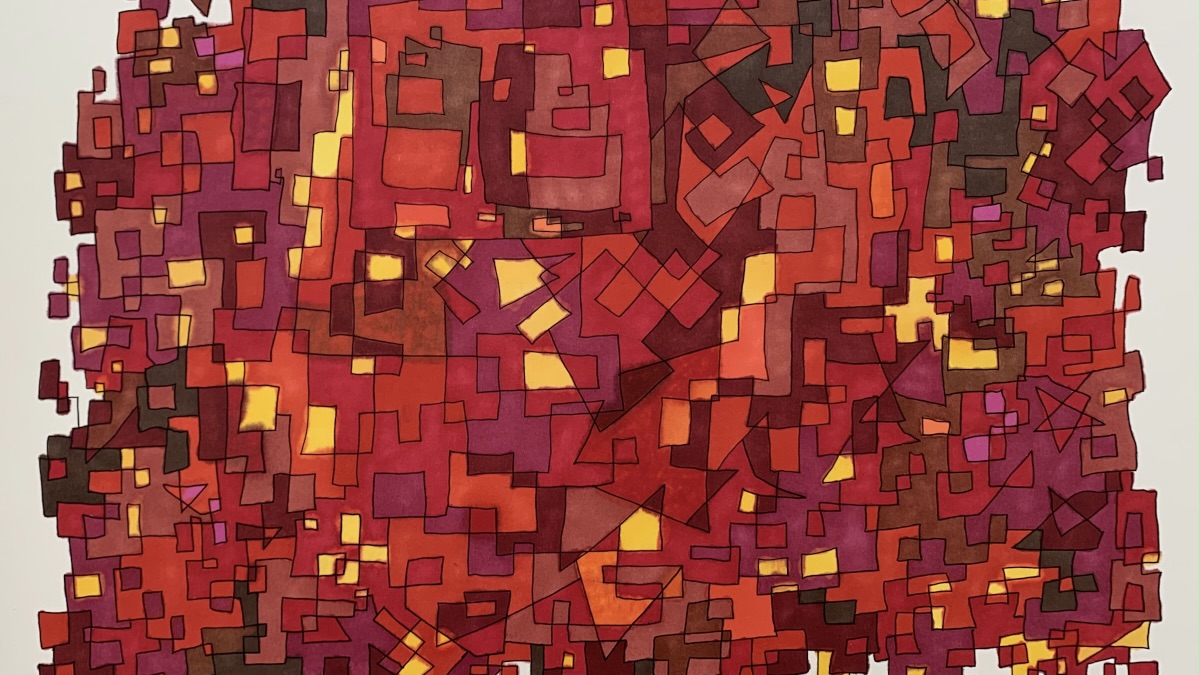 Hi, my name is Tris. For many years, I wrote about popular music in regional publications. Lately, I’ve changed my focus to visual art. I didn’t do this because I’ve lost interest in pop; I still listen as much as I ever have. I did it because there’s an astounding amount of talent in and around the town where I live, and too much of that talent is undersung. Jersey City is well-known for its Mural Arts Project, and many of the artists who’ve redecorated outdoor surfaces are worthy of the attention they’ve gotten: Clarence Rich, DISTORT, RU8ICON1, 4SAKN, and others. But Jersey City is also distinguished by the number of outstanding artists working at a much humbler scale. Their work doesn’t shout; instead, it comes on with a whisper.  It’s not always easy to notice or appreciate what they’re doing. That’s what I’m here for.

This May, many of the artists who give Jersey City its peculiar character will have work on view in our local galleries. MANA Contemporary, the biggest arts institution in the city, will make good on its promise to return from its renovation with ambitious spring shows.  I’m going to get to all of it, and I’ll have a review for each of these exhibitions soon.  Today, though, I’d simply like to make you aware of the embarrassment of options you’re about to have. If you love the visual arts, you’re definitely in the right town.

The return of the Power Pop Trio at Firmament

Kayt Hester is probably one of the best-known visual artists in Jersey City, and for very good reason: using little more than black tape stuck on a white background, she summons scenes of great emotional intensity and narrative detail. Making magic with humble materials is a local tradition, and Hester’s black-on-white pieces are aesthetically aligned with Norm Kirby’s fabric designs, threaded through the apertures in chain-link fences. The pop art flavor of her work also makes it a natural match for the glowing candy-counter hallucinations of Robert Piersanti, and the wonderfully stark illustrations of wise-cracking Bayonne artist Joe Waks, whose pieces resemble old advertisements and guidebook illustrations stripped to their barest — and most explosive — essentials. Piersanti, Hester, and Waks have presented together before at PRIME and the lost, lamented LITM, but never in a room as spacious as the Firmament Gallery (329 Warren St.) at the Nimbus Arts Center.  There, these catchy, immediate power pop compositions ought to have plenty of room to resonate. This show is open right now.

An eco-themed exhibit at Deep Space

The city’s cornerstone independent gallery follows up the excellent all-female “Mothership Connection” with another group exhibition that celebrates femininity. But it’s Mother Earth who the artists get protective about in “Material World,” a show that, pointedly, launched on Earth Day. This new Deep Space probe brings back many of the artists who flew on the Mothership, including Rebecca Johnson, whose lovely lime-washed paintings draw connections between female vulnerability and ecological frailty, Johnson’s sibling SarahGrace, tufter of bright felt, the visual storyteller Delilah Ray Miske, fabricator of unnerving interiors, and the inspired fantasist Shamona Stokes, a reliable opener of portals into a twee, adorable, subtly terrifying parallel universe. Expect renderings of flowers and plants — some achingly beautiful, some weird and otherworldly. The show’ll be up until June 10. Hopefully the planet will be around that long.

A coming-out party for Elevator

Speaking of Shamona Stokes, she’s the co-curator of “Fresh Air,” a group show mounted in the first floor lobby of the Hamilton Square Condominiums (232 Pavonia Ave.) Stokes is working with Kristin DeAngelis, curator of “Coming Into Focus,” a candid look at the city during the pandemic era from painters Deb Sinha and Ben Fine.  DeAngelis exhibited “Focus” in the wainscoted atrium of the Majestic Condominiums on Montgomery Street, a property renovated 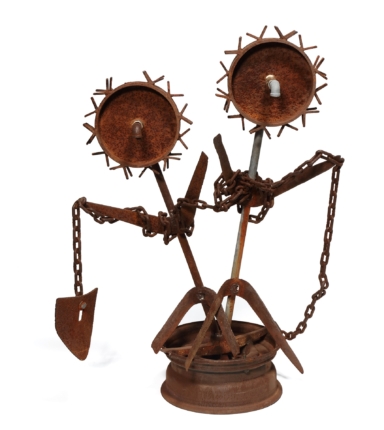 Joe Minter’s “We Lost Our Spears”

and run by Silverman Buildings.  Hamilton Square is also a Silverman space — as is Elevator (135 Erie St.), a new hive of art studios and small-scale creative headquarters located a little farther south in Hamilton Square Park. The Elevator artists opened their studios during the most recent Jersey City Fridays event, and what they’re cooking up in there is pretty fascinating. “Fresh Air” brings the Elevator artists across the pedestrian extension of Pavonia Ave. for their first public foray. I’m sure they’re determined to make a good first impression. The show launches on May 4, and it’ll be accessible to the public whenever the front doors to Hamilton Square Condominiums are open.

MANA Contemporary springs back into action

There’s a lot on the line for MANA Contemporary (888 Newark Ave.), too. After a tumultuous 2021 that included the publicized arrest of former executive director Eugene Lemay, the arts complex made a very shrewd move: it elevated Kele McComsey, curator of the incendiary climate change exhibition “Implied Scale,” to the position of Director. McComsey is charging out of the gates with a spring show that’s every bit as politically engaged as his last one. “Land of the Free” is a three-part project that takes migration in North America as its subject. Joe Minter is an Alabama resident, but “We Lost Our Spears,” a series of nine sculptures assembled from discarded materials, is aesthetically aligned with Jersey City artists’ long tradition of making wonders out of waste. Minter’s “Spears” opens on May 12, alongside the start of “Borderlands,” an improvisational painting that’ll be completed over a two-week period by Hugo Crosthwaite. (“En Memoria” by Vincent Valdez, the third piece of the puzzle, doesn’t open until June 11.) Meanwhile, the Monira Foundation, which has been very active at MANA all winter, is launching a new show of their own on May 14: “Anonymous Architectures,” a series of photographs of empty New York City bars and shuttered businesses.

The other nest of studios and arts activity is 150 Bay Street — although some of the brightest-feathered birds have recently flown the coop after a rent increase. Michelle Vitale, better known as the audacious fiber artist Woolpunk, has packed up her yarn and left, and it’s hard to imagine the second-floor 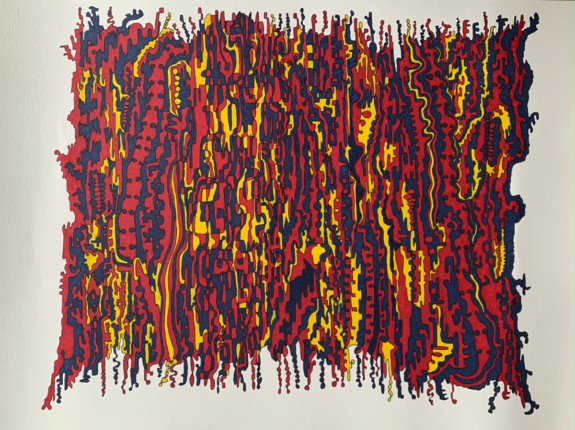 space without her presence. Those artists remaining will mount the latest in a series of group shows: “Impact!” opens on May 6 and runs at ART150 all month. Expect an emotional baggage cart (a fuzzed-up, wildly decorated shopping trolley) from the playful Theda Sandiford, experimental photographs from Susan Evans Grove, thickets of color and shape and expressions of hard-won optimism from J. Heloise, the mesmerizing geometry of Mindy Gluck, the muted cityscapes of Deb Sinha, the ambitious, immersive canvases of Guillermo Bublik, the precarious concrete towers of Josh Urso, and other work from many other talented locals affiliated with the advocacy group ProArts.  Like all creative communities, theirs is a fragile one. We should celebrate it while we can.

Vitale may no longer have studio space at 150 Bay Street, but a few blocks to the west, she’s in charge. She’s one of eight curators (Maria Kosdan of PRIME Gallery is another) who’ve personally selected pieces for a new group show – the second at Casa Colombo since its reopening to the public. Guillermo Bublik has work in “Curator’s Choice,” too, as does Cheryl Gross, ringmaster of a menagerie of fantastic animal drawings, and Andrea McKenna, investigator of the line between material reality and the ghost world, and an accomplished curator herself. The show also marks a return to Jersey City for Flemington, NJ artist Valerie Huhn, whose show at Outlander Gallery was one of the highlights of 2021. Huhn has developed a personal style that incorporates ink-colored fingerprints on huge paper tapestries and mosaic tiles, and pins driven into books and ordinary household objects.  Her body of work speaks powerfully of humanity, surveillance, crime, trauma, and the elusive, shifting quality of identity, and it’s an example of how much clarity and focus an artist who has found her voice can attain.