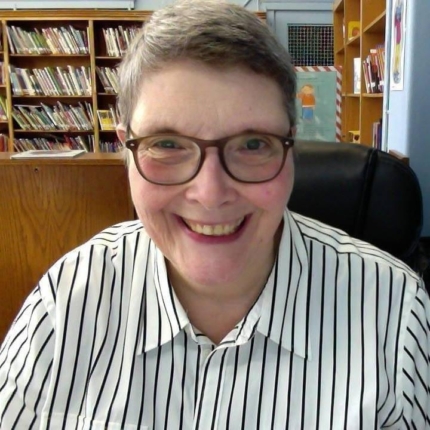 North River Sing Community Chorus deeply mourns the loss of Jean A. Sullivant, a beloved member of the chorus who succumbed to pancreatic cancer at the age of 67 on August 5. Jean resided near Van Vorst Park in Jersey City.

Born to Norris and Dora (nee Lutschaunig) Sullivant in 1954, Jean grew up in The Bronx where she attended St. Philip Neri School and for high school the Academy of Mount Saint Ursula. Her Catholic upbringing and education would shape her whole life.

Jean earned a bachelor’s degree in English from Fordham University and then a master’s in library sciences from Pratt Institute.  She attended the University of Toronto where she earned a master’s degree in English and began studies toward a Ph.D. in English. Rather than complete her doctorate, Jean returned to the U.S. and became the medical librarian at Mount Sinai Hospital/ICAHN School of Medicine. She was published in several peer-reviewed publications and was highly regarded in the field.

In the year 2000, Jean suffered an injury and had to leave work for a brief time. Upon her recovery, she assumed the position of librarian at Ascension School, a Catholic school in Upper Manhattan for children from preK3 to eighth grade. She served in that capacity until her retirement in 2021.

During her tenure, Jean carefully curated the library to ensure that students had access to a wide variety of books to bolster their education and engage their imaginations. She obtained certification in the Catechesis of the Good Shepherd whereafter in addition to remaining school librarian she taught religion to the three-, four-, and five-year-old students.

Jean loved “her babies” and took particular delight in introducing the children to the love of Christ. She loved reading to her charges and took great care to select books that were not just fun but relevant to the classroom instruction that week. She fondly referred to these reading sessions as “Dotty Time.”

With a prodigious thirst for learning herself, Jean completed two additional master’s degrees during this time: one in religious studies (from the Institute for Religious Studies in Yonkers) and the other in reading and literacy (from Walden University in Minneapolis). She obtained both degrees while working full time.

Jean was also generous and engaged member of the Jersey City community. She volunteered as a literacy teacher at the Jersey City Free Public Library where she took great pleasure helping her adult students and witnessing their successes.

In 2016 Jean joined North River Sing Community Chorus. An alto (or “altoid” as she called herself and her fellow altos … since they were “curiously strong”), Jean performed in numerous concerts with the choir throughout Jersey City and in neighboring towns. Some of these performances took place in nursing homes and homeless shelters. These were always the ones Jean found the most rewarding.

Jean’s generous heart, kind soul, and mischievous wit combined in such a way as to make her not just special but unique. There will never be another Jean Sullivant. Those who knew her are thankful for having known her. She will be deeply missed.

In lieu of flowers, the family asks that donations be made to the American Cancer Society in Jean’s memory.