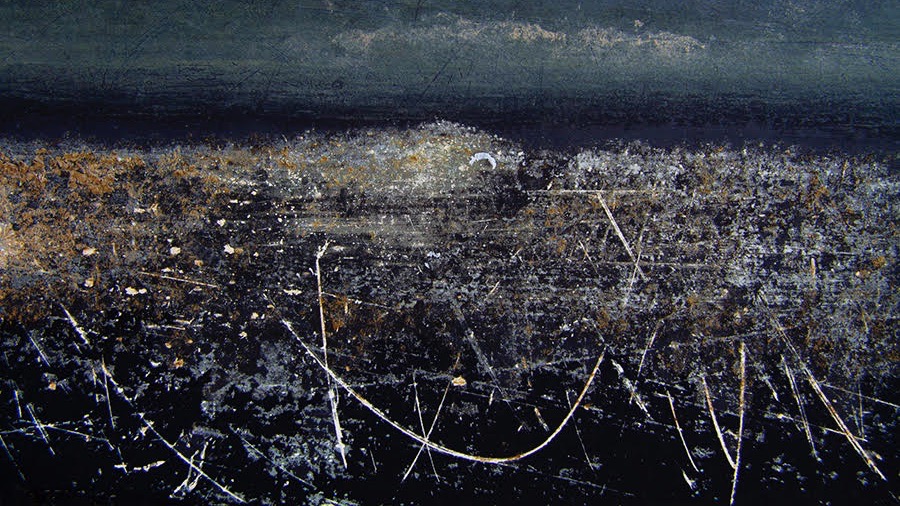 JCAST is an annual reminder that Jersey City is a big place. Getting from one gallery to another in a distant neighborhood is time-consuming (even on a bicycle!), and though the events and parties went on well into Friday and Saturday night, eventually, galleries do have to close. I tried to see the whole shebang and ended up, alas, with about a third of the Jersey City Artist and Studio Tour left unexamined. My itinerary largely bypassed the Heights, and that had as much to do with traffic patterns and the route of the Fire Department Parade as it did with the art on view. Luckily, there was just as much to see south of Newark Avenue as there was on the north side — and if your studio happens to be in the Heights, I promise I’ll get up there soon.

Sprawling as the modern Studio Tour is, most of the activity remains clustered around a pair of hubs: 150 Bay Street, home of the venerable advocacy organization ProArts and a warren of small studios with the vibe of a start-up company headquarters, and MANA Contemporary (888 Newark), which, regardless of the event, continues to feel like a cross between a dry goods warehouse, a top-flight museum, and a medieval fortress. The 31st edition of JCAST suggests that the major institutions in town are cooperating, if not exactly singing in perfect harmony: Art House Productions mounted a fine group show at 150 Bay, just a set of quick paces from the ProArts exhibition, and Art Fair 14C, which announced a partnership with Art House earlier this year, will hold their mid-November main event at the Glass Gallery at MANA.

For one weekend at least, The Powerhouse Arts District functioned as the activity hub it was designed to be, with shows at Nimbus, the bright, accessible, street-level Dvora Gallery, the reliably gorgeous Novado Gallery, and several other spots near those cobblestoned streets. It wasn’t quite enough to make a longtime viewer forget that the former focus of the Studio Tour — the Arts Center at 111 First Street — is long gone. Yet the healing after the broken heart continues, however slowly.

A list of exemplary pieces from an event as large and multifaceted as JCAST is going to be highly subjective. Apprehension depends on lots of random factors: mood, lighting, placement in a gallery, the relationship of the thing you’re seeing to the last thing you saw. Nevertheless, these are eleven works that made an immediate impression on me — and if you saw them, I’ll bet they made an impression on you, too. Many are still viewable and will be for a few weeks. You don’t have to wait for municipal sanction: you can string them together into a Studio Tour of your own. 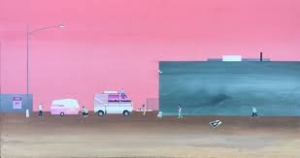 The Hive Goods is a shop beneath Deep Space Gallery, and in addition to clothing and an excellent selection of albums on vinyl, there’s art by Deep Space favorites hanging on the walls. “Waiting” is a radioactive pink-sky landscape rendered in acrylic, featuring a windowless big box store with a pair of security cameras perched on a sharp corner, a lonesome ATM, a chain-link fence, and a target-practice poster on the ground. Garcia’s painting suggests both the urban immediacy of Jersey City street art and the weirdly depopulated, post-industrial scenes of Ed Ruscha. 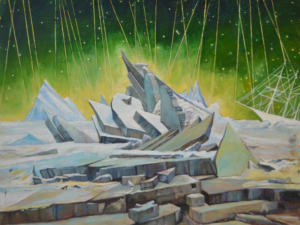 Peter Delman’s “The Wreck Of The Endurance 1915”

Peter Delman is a veteran Jersey City artist and visual storyteller whose paintbrush can be a pleasingly blunt instrument, especially when he turns it against history: his brutal, devastating reanimation of the famous photograph of the Little Rock Nine was a highlight of “The Empowering: A Social Justice Exhibit,” the inaugural show at Art150 at 150 Bay Street. But I’d never seen his dramatization of Ernest Shacketon’s Endurance, with the ship’s masts like fragile white cobwebs against a starry green sky, and slabs of ice piled like the walls of a collapsed apartment tower. Delman is a great communicator and one of the deans of Jersey City painting, and this is the artist at his most illustrative. 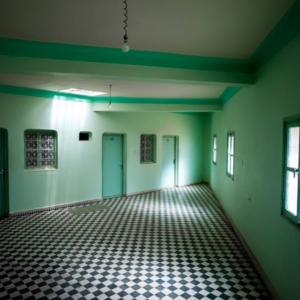 Tucked away in the back of a wine shop on the eastern edge of the Powerhouse Arts District is an art wall that feels a bit like a bulletin board in a college dormitory. But Benjamin Mortimer has made the most of it, bringing the spookiness to an upmarket store with a series of photos of cramped, oddly-lit interiors, and exteriors in a state of confusion: ong fluorescent bulbs reflected off of industrial tiles, pipes headed nowhere, and a too-tight diagonal wall leading the viewer across a checkerboard floor, under a single dangling light, toward whatever it is that lurks in room 13.

At first, Kate Eggleston’s conical plushies and candy corn-shaped characters seem playful and benevolent. But the closer you inspect them, the more the anxiety and mania behind the art becomes evident. It’s reductive to call her solo show at SMUSH — which will be up until Nov. 6 — a response to pandemic conditions, even though it clearly is. It’s an expression of one woman’s struggle to find joy, connection, and articulation at a time when all of those things have been hard to locate. 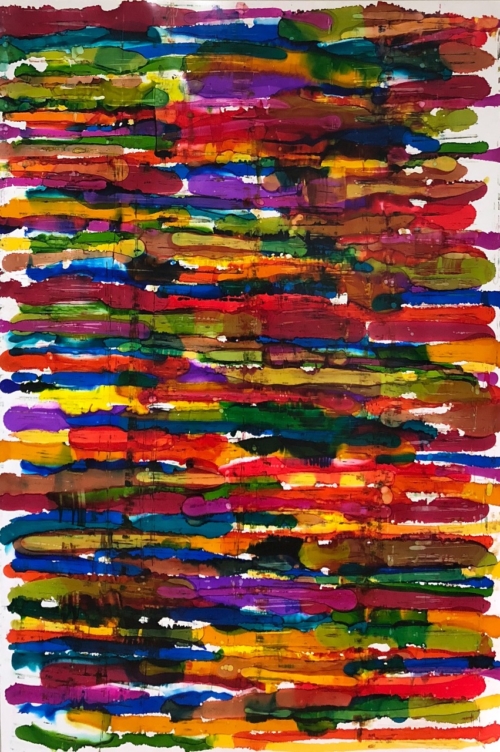 “Blurring The Lines” by Bryant Small

Because they’re thin, and a challenge to control, alcohol inks are underutilized. Yet they produce gorgeous, intense, liquid fields of color, and when used by a master, they can evoke the sacred radiance of stained glass. The large paintings of Bryant Small and Diane English generate the illusion of a light shining behind, or inside, or hovering somewhere over the images. Their colorworks open like flowers, and sometimes like fireworks; there’s a sense of barely managed chaos, revelry, and constant excitement. The show will be on view at Dvora Pop-Up Gallery, which is something of a luminous lightbox itself, through Oct. 27.

Anybody who creates a metropolis — a great green walk-in closet of an installation — out of discarded Mountain Dew bottles is making a statement about waste and overconsumption. “llluminous City” is part of a show called “Too Much!,” where it occupies the same corner of the gallery as Maggie Ens’s scroll-like, thoroughly sincere and wildly hopeful “GAIA Calls Us To Healing.” But Thantapalit also works with Mountain Dew bottles because they’re rewarding to manipulate. He strips them of wrapping and stacks them into bamboo-like columns. He assembles shiny plastic towers that look like our own. He saws them in half and fuses them together into globes and suspends them over the skyline — a great net of polyethylene molecules threatening to drop on the town. 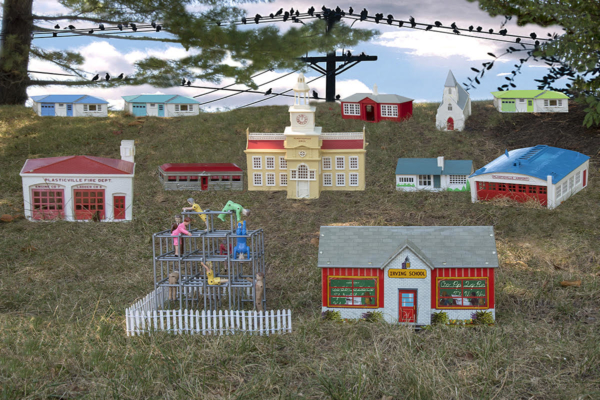 There’s nothing new about assembling and photographing miniatures. But the wood, plastic, and marshmallow biosphere created by Dot Paolo for “Monkey Bars” is so peculiar and personal that it feels like a glimpse into a reticent, antique, emotionally provocative parallel world that draws on small-town American archetypes. I was struck by the sense of import generated by the summit meeting, attended by scores of plastic dignitaries, still on their golden pedestals, gathered around a banquet table. But better still was the shot of the summit’s reception area, built of Tinkertoy towers as shaky as the expression on the face of the doll-secretary, wary of visitors, poised but precarious, alone in the presence of the strange animating forces of the untamed imagination. The show closes on Oct. 15. 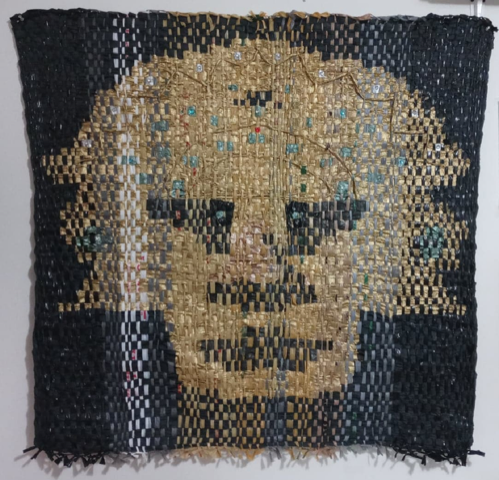 The “Hispanic Heritage Month Exhibition” at City Hall is full of intriguing pieces, including Elliott Appel’s June-warm portrait of Hoboken’s La Isla Cuban restaurant, and Judyanne Affronti’s birds, buttons and flowers made from zigzags of felt. Presiding over the show is a face, regal, rough, crowned, jewel-adorned and somewhat accusatory, woven in fierce tribute to the Paracas and Chimu cultures of Perú. It’s two square feet of ferocious pride, an avatar of resistance and indelible identity, and it’s only up until Oct. 15.

It looks like a cityscape, with lights receding into the distance, and a network of roads and electrical wires, all under a glowering twilight sky. Really, it isn’t anything of the sort. It’s the hull of a boat, battered by encounters with the open sea, and strategically photographed by Susan Evans Grove to accentuate its dignity and accidental artistry. Every scrape, pockmark, and rust-stain represents a handshake with something real: the ocean, grand and powerful, and always ready to make an impression. “Beaux Reves” was the most eye-catching of Grove’s hull photographs on view, but they’re all triumphs of humility, testaments to a natural world we’re still struggling to tame. 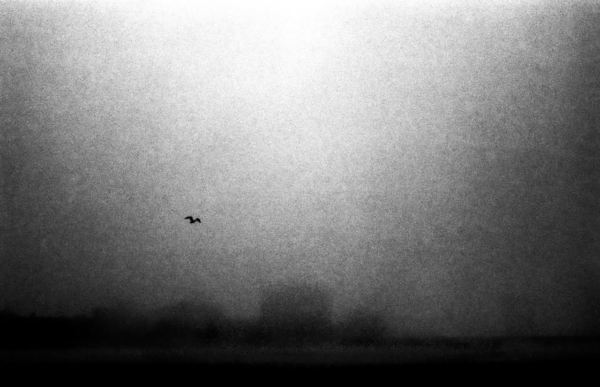 “One Over Deal Lake” by Dorie Dahlberg

Dorie Dahlberg is the best photographer to come to prominence in the Garden State since the great Ed Fausty. Fausty presented the vanishing post-industrial landscape of Jersey City as an interface with the extraterrestrial; Dahlberg seems to view the Jersey Shore as the leading edge of a slow-fade apocalypse. Maybe they’re both right. Dahlberg’s “Man in White Hat Walks Into the Fog That’s Become Our Lives,” who dissolves into the thick, muffling mist of the Boardwalk, is self-explanatory.  But I root for “One Over Deal Lake,” a single black bird clinging, defiantly, to her dimensions as the world around her fades to white noise.

There’s a painting by the accomplished muralist RUBICON on the wall at The Hive Goods, and it bears all the characteristics of his work: sensitivity to the nuances of the urban landscape, the velocity of life on the street, the peculiar manner in which the city defines the emotions and the rhythms of the people who live here, and his remarkable ability to inscribe immense melancholy in the faces he paints. All of that is refined to its absolute essence in a piece that, as far as I could tell, wasn’t even on display. RUBICON painted crowd scenes on both sides of an old briefcase, and they’re utterly fantastic — crackling with humanity at its noblest and most beleaguered. The people are crowded together, but they’re distinct. Captured on the side of an instrument associated with the world of commerce, they say: here is the lifeblood of the city, not the dollars and goods exchanged, or papers shuffled, but the human beings who make their lives here. I wouldn’t even have discovered the piece if I hadn’t been poking around in a part of The Hive Goods that I probably wasn’t supposed to be — and that’s a metaphor for JCAST itself, which is a sale, and a conference, and a party, but above all, an invitation to explore.