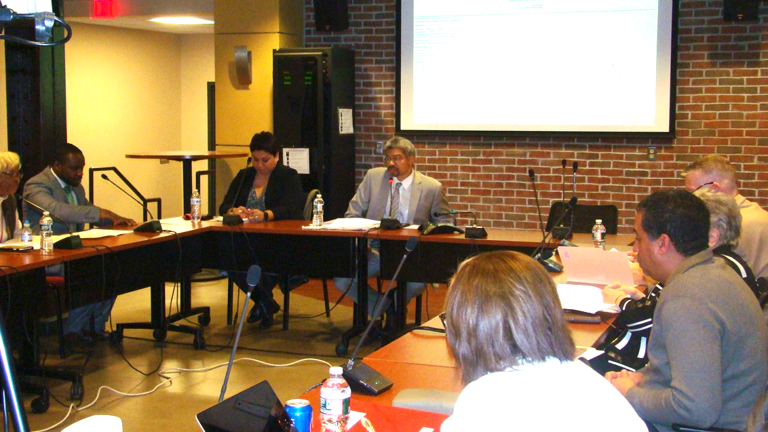 Parents and Educators Implore the Board to Put Children First

Hillary Clinton wrote, “It Takes a Village” to raise a child. In the case of Jersey City’s public-school children, it takes a budget that will address their needs, from counseling to a decent breakfast.

A small yet impassioned group of parents and teachers spoke at the school board’s public meeting held at the Jersey City Board of Education’s (BOE) Claremont Avenue office Thursday night. They were there to give the nine-member board their input as it prepares the 2020-2021 school budget. The first draft goes to the county’s superintendent of schools on March 20, and the budget must be passed by May 14.

The Thursday night meeting in the Dr. Emery Konick, Jr. Conference Center took place two days after Mayor Seven Fulop and Ward D Councilman Michael Yun held a press conference outlining a $250 million school-funding plan to fill the BOEs $120 million budget gap. Fulop and Yun proposed a three-year commitment to transfer $40 million over from tax abatements to the BOE.  Their plan would also include spending cuts on firefighter and police recruitment, a pay freeze for select staff, limits on overtime pay and a school tax levy. School taxes are part of a homeowner’s property tax.

Board President Lorenzo Richardson spoke briefly about the mayor’s press conference, saying that he sent the mayor an email the morning of the press conference “providing directives as to what the needs of the schools are in terms of funding from the city.” In the email, President Richardson requested that the city fulfill its commitment to cover the state’s funding cut, which is projected to be $72 million (previously believed to be less than $55 million).

“At this time, we are dealing with funding issues related to state cuts,” President Lorenzo said at the start of the public forum. 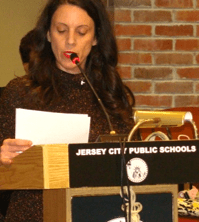 The board president then opened the public meeting to the small group of parents and educators who came to talk. Jersey City resident and P.S. 5 parent Nancy Pokler talked about the loss of 200 public school positions including 160 teachers, 25 assistants and aides, 20 janitorial, security and food service staff, and 15 administrator and supervisor positions. She spoke of the state’s SFRA (School Funding Reform Act) formula of 2008, used to determine how much each school district receives in funding.

“The SFRA shows that Jersey City can and should be funding its own schools,” Pokler said. “Jersey City has the largest tax base in the entire state and shockingly one of the lowest school tax rates, ranking 532 out of the 565 municipalities.”

Jyl Josephson, parent of a P.S. 26 fifth grader, said that she didn’t want to talk about the numbers. Instead she wanted to talk about Jersey City’s schoolchildren. Josephson told the board that in the past she attended many public-school board meetings where parents made demands about what they wanted without ever mentioning their children’s needs. Josephson said she hoped the board would focus on the children above all else.

“As you begin to make the many difficult and important decisions that you’ll be making over the next few months, I want you to start right now by thinking about children, children that are your primary constituents,” Josephson said. “Our schools have the task of identifying and finding our children’s talents, seeing their beauty and potential, helping them correct their mistakes and do better next time so they can become adults who live together and take care of each other in this beautiful and vibrant democracy. I hope that throughout this process, you will take a moment and imagine the kids and put those kids first.”

School Nurse at P.S. 6 in Jersey City for 18 years, Jackie Matthews asked the board to hire mental health counselors for children who are suffering from extreme anxiety and parental neglect. She said many of the children who are general education students come to school tired, hungry, and filled with anxiety. These children need counseling, she said. 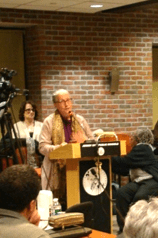 After all the speakers addressed the board, Superintendent Walker thanked them for expressing their concerns about the students. He said the board will focus on restoring “appropriate staff and services to meet the educational needs of the students.”

President Richardson then closed the meeting with a promise to address the issues brought up by the parents and educators. He said, “We will be keeping all your comments in mind and make sure we do everything we can to make sure this budget respects every student in this district.”

President Richardson also said there will be more public meetings scheduled before the March 20 deadline.