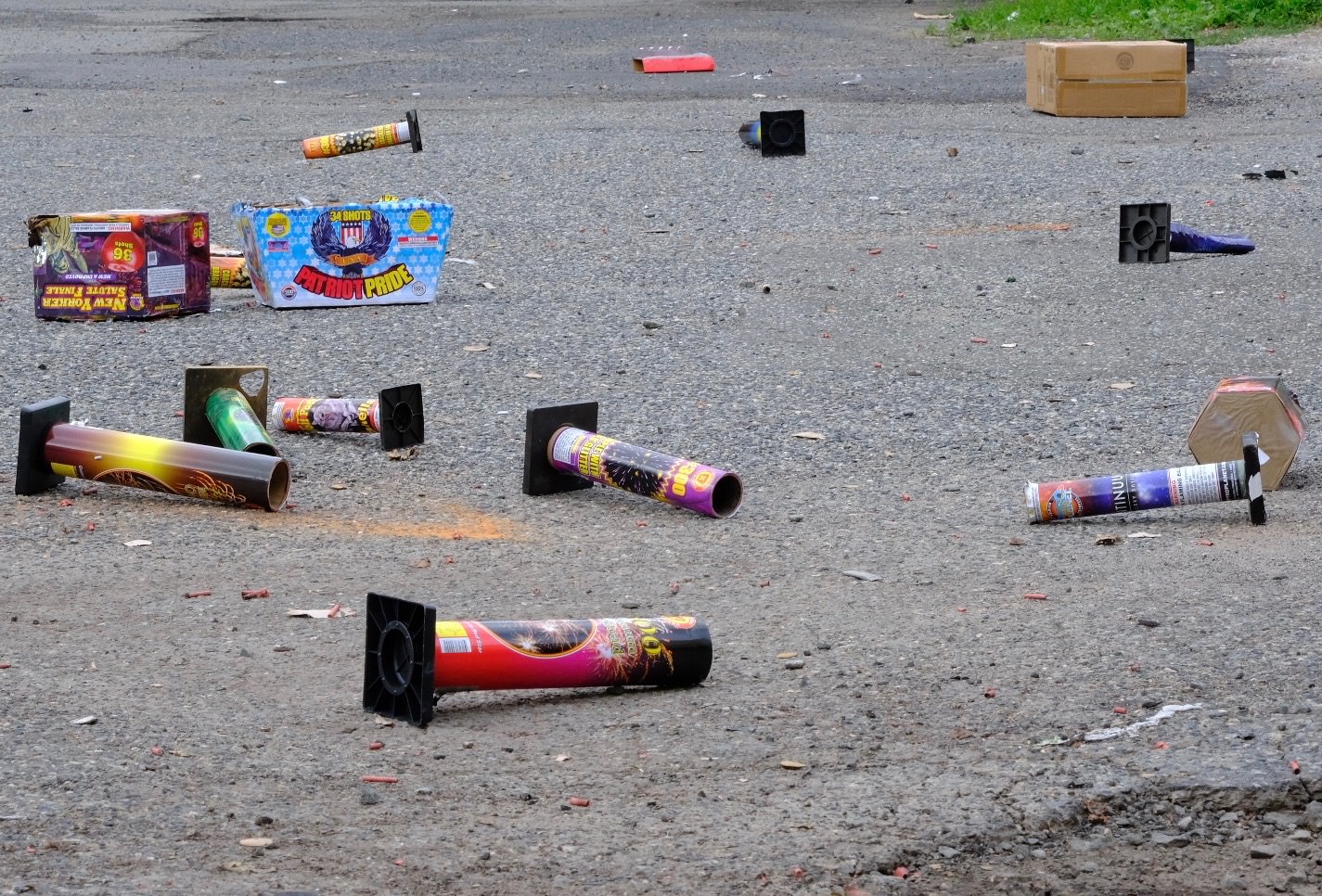 The fireworks had been going off for twenty minutes before I decided that I’d had enough. I know my dog had. She had snuggled up to my bed and was looking up at me with her big brown eyes in heartbreaking terror.

Bleary eyed, I dialed 911. It was 12:23 a.m., no answer.  Three minutes later, I dialed again. Still no answer. My anger began to mount. In what universe does 911 not answer?  Twice? What if I was being robbed or my house was on fire?

There it was in my address book, the phone number for Jersey City Police, Eastern District. Maybe they’ll answer the phone.  Someone did. “Officer [something or other].” I explained the problem; a large group of men were setting off loud, professional looking fireworks in a parking lot about fifty feet from my bedroom window.  They had probably woken up half the neighborhood. Could they do something?  Wasn’t this illegal?  Wasn’t this dangerous? Wasn’t there a task force or something to deal with this?  The officer was apologetic.  “We’re very, very busy right now.  Let me forward you to dispatch.”   Before I could protest, he sent me back to 911. The phone rang and rang.  No answer.  Make that three attempts. 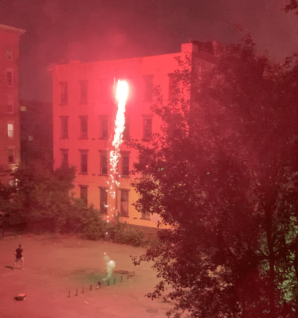 I hung up in disgust and dialed 911 again. Ten minutes after my first attempt to get through, I got a living, breathing human.  I yelled something about how outrageous this all was and how there would be hell to pay. The nice lady, clearly trained to deal with angry, sleep deprived hotheads like me making threats they couldn’t keep, promised she’d send a car as soon as one became available.  Yeah, sure, I thought.

I was shocked when five minutes later, two police officers walked into the parking lot. One of them bravely used his nightstick to knock over the rocket tubes, some of which were still smoldering.  The men scattered to their cars and drove off.

That the police eventually responded to my fourth attempt to reach 911 wasn’t a cause for celebration.  In reality it was too little, too late. My backyard Grucci wannabes had been at it for 40 minutes and had pretty much shot their load by the time the law arrived. A police officer within ten blocks could have located them immediately; no 911 calls, no high tech equipment needed.  In the end, the neighborhood had been awakened in the middle of the night and the perpetrators had had their fun with no repercussions. The proverbial barn door had been shut a tad late.

Apparently, the city was aware of the incipient fireworks problem.  According to the Jersey Journal, in June Police Chief Michael Kelly created a “Community Response Unit” to respond to fireworks and noise complaints. “There has been a staggering increase in resident complaints and related calls to the JCPD” mayoral spokesperson Kimberly Wallace Scalcione told the Journal.  She further laid some of the blame at the feet of a new New Jersey law allowing the possession of “certain sparkling devices and novelties.”  Confirming the old adage that “if you give ‘em an inch, they’ll take a mile,” people have used the looser law to justify travelling out of state to buy more powerful, illegal fireworks like firecrackers, roman candles and bottle rockets, the thinking goes.

In a diverse place like Jersey City, it’s no surprise that you get diverse opinions as to what should be done. “It’s been worse this year than ever” opined Tony Nation, 53, of the Village.  “I don’t remember having a two to three week lead-up [of firework use] before. There should be a 100% ban.” Pointing to the new law he added “it’s been so abused…a few people have ruined it for everyone.”   Matt Caruso, 29, of Van Vorst Park agrees. “The police department needs to get to work. I feel like it’s a matter of time until a building burns. It can’t possibly be so difficult to find where the explosions are coming from over and over and over again.”   Susanne Johansson of Van Vorst Park is not a fan. “Fireworks has [sic] been going on across my street for 4 hours now. This is insane, I have a dog that is at the point where he is hurting himself, that’s how scared he is. This has to stop.” 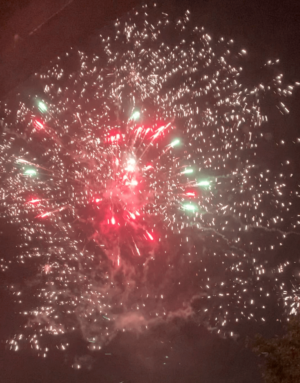 Joseph Hume, 36, of Van Vorst Park looks at it more philosophically. “I empathize with dog owners who have negative reactions to the noise, but the 4th of July is a festive time for Americans. We are actually fairly tame if you compare our Independence Day festivities with the raucous events during Chinese New Year in Beijing, Diwali in New Delhi or New Years in Vienna.”  Rashena Wilson, 43, of Lafayette, doesn’t mind them, so long as they aren’t abused. “I’ve lived the neighborhood for 13 years now and am used to them, so they don’t bother me at all. However, I don’t have small children or pets so I don’t have the same complaints as others. I do feel for them though. This year they have been excessive… [t]he only problems they pose to me are the potential fire hazards …[t]here should be regulation and education so they are used more safely.”   April Kuzas, 41, of Greenville takes a middle ground. “There has been much more than normal, and I have a high tolerance for fireworks. I generally don’t mind them around the 4th of July but the two-month warm up was a bit excessive.”

However, the problem is much bigger and more serious than lost sleep and traumatized pets. According to the Consumer Product Safety Commission, in 2018 alone, fireworks caused five deaths and were involved in an estimated 9,100 injuries treated in U.S. hospital emergency departments.  And on Saturday, a Jersey City man died after being struck in the neck by fireworks. Moreover, according to the National Fire Protection Association, each year there are many more fires on the Fourth of July than any other day of the year, and fireworks are, by far, the leading cause of those fires. The Association also reports that in average each year, fireworks cause an estimated 18,500 fires.  Just in the last week, fireworks destroyed a home in Flatlands, Brooklyn and an apartment in Manhattan.

Yesterday we asked the mayor’s spokesperson for a comment on the issue. We haven’t received a response yet.  But to paraphrase Joseph Caruso, the city may need “to get to work” on what many perceive as a serious and growing problem.