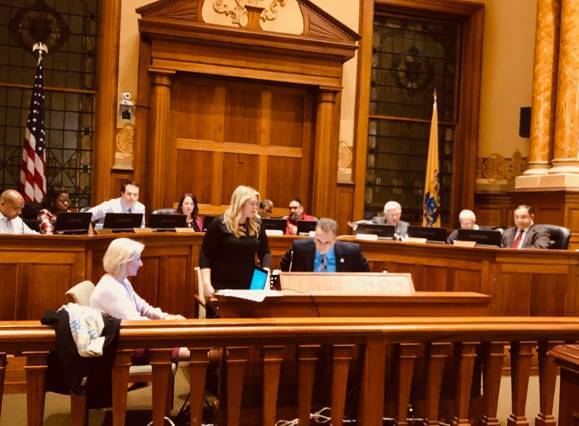 At Jersey City’s Feb. 13 city council meeting, members approved a referendum for a new publicly funded arts trust fund to be on November’s ballot, voted unanimously for Sean J. Gallagher to replace retired Robert Byrne as city clerk, and approved a resolution to move forward on a plan for the redevelopment of Laurel and Saddlewood Courts in downtown Jersey City.

City Hall’s council chambers buzzed with local residents including a group of Downtown homeowners who came to address the council. They represented 37 of the 38 homeowners who want the council to pass a resolution formalizing a plan that deems their properties in need of redevelopment with possible condemnation. The developer Lennar Multifamily Communities (LMC) has made a tentative deal with the 37 homeowners to buy their homes for agreed-upon prices. In their place, LMC will build a 50-story high-rise with 810  rental apartments and 14,000 square feet of retail space, a new public park, an expanded Filipino Veterans Plaza, and a new public school for 300-350 children.

“We support the city’s plan to redevelop our block based on safety issues as well as the obsolete design of the buildings,” homeowner Tommy Tran said. “All of us have been working so hard with the city’s planner to come up with a solution to this problem. I want to state we’re very knowledgeable about what we’re getting into.”

Tran talked to the council about the 38th homeowner who has refused to work with the other homeowners. Trans said the homeowner, a developer, doesn’t live on the property but bought a home there “with the intention to really bully us.”

“It was like, ‘If I don’t build on this block, nobody builds on this block’,” Tran said, referring to him. “We couldn’t deal with that. Our properties are obsolete. It’s been a long journey. I hope you can help us. Your vote today means a tremendous amount to us.”

Founder and CEO of the Shuster Group of Jersey City, Eyal Shuster is the 38th homeowner against the redevelopment plan. He attended the council meeting, and when it was his turn at the podium, he spoke out against the resolution, saying the city was treating him unjustly. If the resolution is approved, the council will then consider acquiring Shuster’s property through eminent domain.

“The city is unfairly and illegally favoring a competing developer and assisting its interference with our six-year effort to develop Saddlewood Court,” Shuster told the council. “With your vote today, you are not condemning my property, you’re condemning my livelihood and the livelihood of over 100 people who work in my office, 50 percent of which are Jersey City residents.”

Councilman Michael Yun showed his support for the redevelopment plan but warned the homeowners that he would not approve a tax abatement if the request came before the Council.

“Thirty-seven our of 38 homeowners want to redevelop their area,” Councilman Yun said. “I respect that. If 37 of 38 people look for redevelopment of their area, they deserve to have it, but don’t come back to the City of Jersey City looking for a tax abatement. You are not going to be happy.”

The council approved the resolution.

The council approved a referendum on November’s election day ballot allowing Jersey City residents to decide whether or not they want the city to establish an “Art Trust Fund,” an arts and culture initiative similar to the 2016 Open Space Trust Fund.  The council voted 8-1 in favor of the referendum with Councilman Boggiano voting “no.”

“We have enough taxes,” Boggiano said.

The fund would support local artists and arts education and would be paid for by the city’s homeowners and businesses at a maximum rate of $.02 per $100 of assessed property value. Mayor Steven Fulop supported the measure. 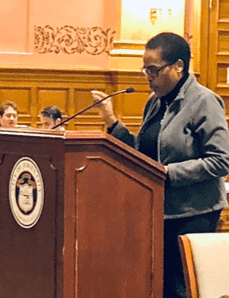 “I think the three-minute limitation is unacceptable,” Daly began. “We have 275,000 residents in Jersey City, and the fact that 25 of us come to speak, you should consider yourself lucky. If everyone showed up, then we’d really have a problem.”

Daly admonished the council for not sponsoring ordinances and resolutions. There doesn’t seem to be enough time for the council members to research what they’re voting on, she said.

“You have the resolutions,” Daly said, “(and yet) it’s sometimes us, the residents, that have to look that up for you and then come in front of you and give you the facts. Council members are supposed to sponsor ordinances. This is what they’re supposed to be doing. If you do, you’ve done your homework.”

Appoint or Elect, Voters to Decide

Several Jersey City residents spoke out against the resolution passed last month by the council to approve a referendum for an appointed School Board. The referendum will be placed on November’s ballot, and if Jersey City residents vote in favor of it, Mayor Fulop will have the power to appoint the nine members of the school board for four-year terms (or longer) starting July 1, 2021.

“An appointed (school) board will leave the public with no say or input in the decisions made by the board,” Paige said. “With an elected board you can change members every year. With an appointed board, the same is not true. Members may remain on the board for as long as the mayor wishes, regardless of public discontent. Your vote will no longer count or have any impact.” 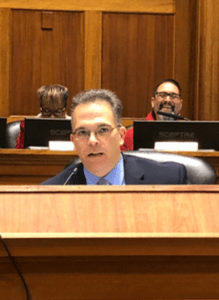 The council voted 9-0 to approve Sean J. Gallagher as city clerk, replacing the retired Robert Byrne. Gallagher worked with Byrne for 22 years and credits him for the inspiration to move up the ladder at city hall.

“Sean, I know you have great shoes to fill,” President Watterman said, as Gallagher stood at the podium. “You have a way of solving problems, and I do appreciate that. You always have something positive to say, and you come up with a solution, and that’s what you need, people who come up with solutions so they can move the city forward.”

With the unanimous vote cast, and to resounding applause, Gallagher accepted the appointment, with his wife, Laura, and son, Sean, watching from the front row of the public gallery.

“I definitely have really big shoes to fill,” Gallagher said in his acceptance speech. “Robert Byrne, without him I wouldn’t exist in the clerk’s office. He taught me well. I’ve worked with Robert for 22 years. He gave me the aspirations to move up. I would love to thank my wife, Laura, my son, Sean, and my brother William who introduced the family to Jersey City politics 25 years ago.”

The council approved a resolution honoring Cheryl Murphy, founder and president of the West Indian Caribbean American Carnival Association in Jersey City, and the association itself upon its twenty-fifth anniversary . The nonprofit hosts an annual parade and festival featuring health screenings and entertainment and an annual business conference on finance, taxes, insurance, and maintaining “healthy” stores.

“We appreciate all that you do for the Caribbean community in Jersey City,” Councilwoman Denise Ridley said. Council President Watterman cast the final “yes” vote.

“Every year Cheryl’s here making sure that this parade and culture is noticed, and for that I commend you.,” President Watterman said. “So often, we get weary. We get tired, but you’ve been faithful. Congratulations for 25 years. I wish you 25 more.”

With a 9-0 vote, Council passed the resolution.