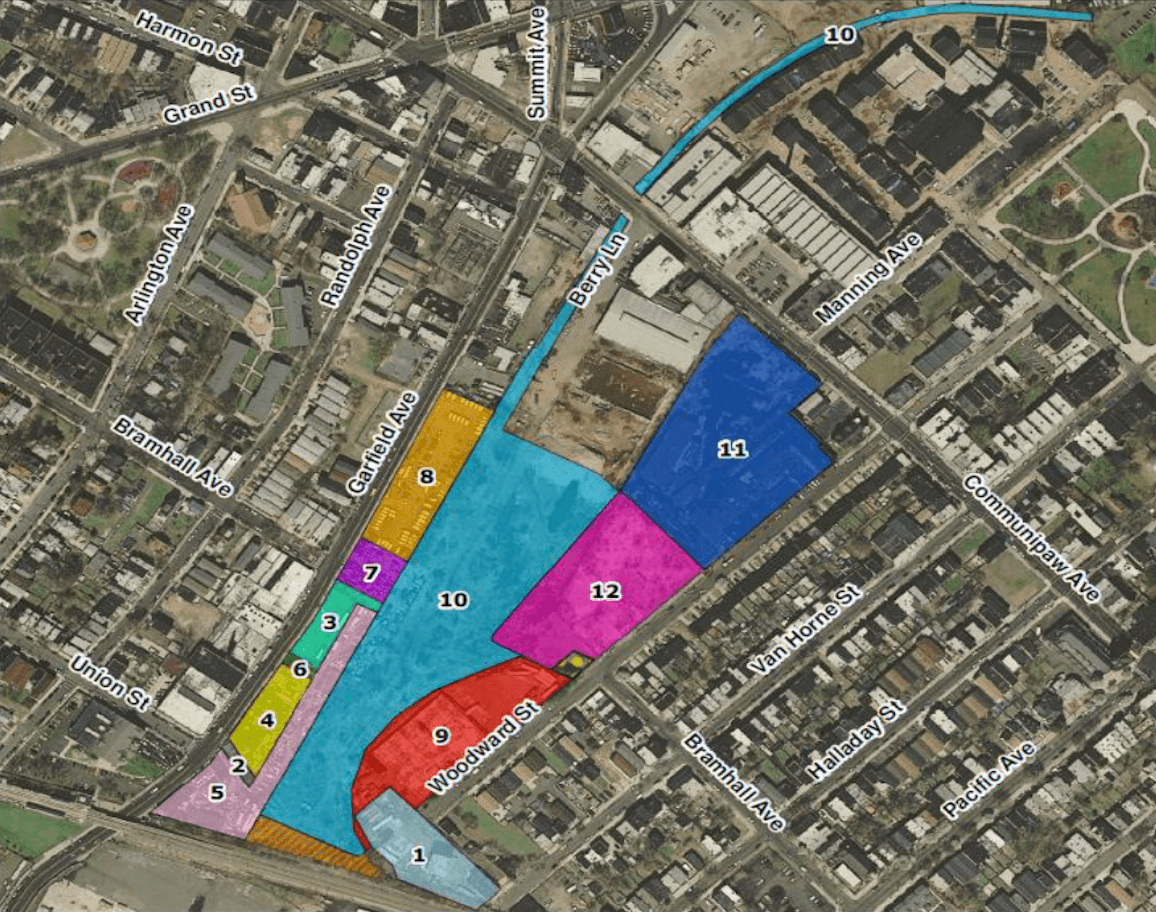 At today’s City Council caucus Councilman Rolando Lavarro suggested that a plan to build a 361-unit luxury high-rise in Bergen-Lafayette may violate the terms of a grant received from the state. Lavarro also stated that newly uncovered documents show that the land, known as Steel Technologies, was supposed to be acquired to become part of Berry Lane Park. 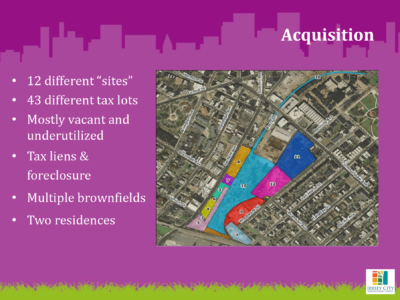 A Power Point slide from Ben Delisle’s July 2014 presentation to the City Council. Parcel 11 is the Steel Technologies property.

In addition to the residential apartment building called “Morris Canal Park Manor,” the developer, Skyline Development Group, has promised to build at the same site a 22,000-square-foot, two-story structure, with a gym, a rock climbing wall, a sauna, dance studios, music studios, and a food concession as well as computer labs and classrooms for STEM instruction. Eight “incubator” commercial working spaces for minority business enterprises would also be included. Eighteen of the residential units would qualify as affordable.

The project, championed by Ward F Councilman Jermaine Robinson and apparently supported by most of the council, has been controversial. The Morris Canal Community Development Corporation, a local group that lobbies for affordable housing in the community, and Bergen-Lafayette residents have questioned the project’s community benefits.

In September, Morris Canal CDC Founder and CEO June Jones told a meeting that it would be better to “reinvest” by expanding Berry Lane Park instead of overburdening the neighborhood with a “luxury rental high-rise only offering 5% affordables fronting smack on Communipaw Avenue.” Jones continued, “For the cost of what we’re sacrificing [in potential parkland], there’s not a whole lot we’re getting back.  We can find alternate spots for a rec center.”

In a September 29 memorandum to City Council President Joyce Watterman, Jersey City Redevelopment Authority Executive Director, Diana Jeffrey — responding to what she called “mischaracterizations or misunderstandings”  — disputed that the property was meant to become part of the park. “The Steel Technologies site was never part of the original plans for Berry Lane Park. It was considered an ‘add on,’ meaning it would be nice if the City could acquire it but not necessary.”

However, Ben Delisle, who was JCRA Director of Development for 14 years and oversaw development of Berry Lane Park, disputed Jeffrey’s statement today. He noted that he had raised over $2 million to acquire the Steel Technologies site. “It was always the intention to include this property in the park.” He described Jeffrey’s characterization as “crazy and disingenuous.” 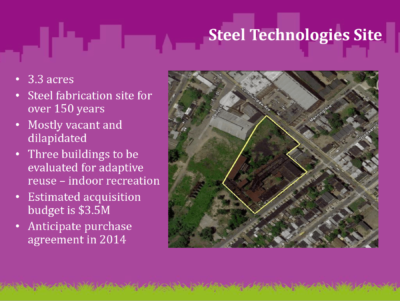 Documents bear out Delisle’s account. Jersey City Times has reviewed a Power Point presentation that Delisle gave to the City Council in April 2014. Several of the slides reference the Steel Technologies land as among the properties to be acquired for Berry Lane Park. In March 2017, Delisle obtained an appraisal for the property as a first step in acquiring the land. According to Delisle, there were also discussions centered around building a large indoor recreation facility on part of the land.

The city also received several grants to purchase the property for the park. In 2010, Delisle applied to the Hudson County Open Space Trust Fund. The application references an additional $2,475,500 in matching grants. Then, on September 17, 2018, Mayor Fulop applied for an additional $1 million grant from the state’s Green Acres Program.

In today’s meeting, Lavarro noted that previous discussions surrounding the project had focused on community benefits and affordable housing.  It should now be seen through a “different lens” he said. Disputing Jeffrey’s memorandum, he countered that “the Steel Technologies site was always meant to be part of Berry Lane Park. Why are we abandoning that vision?”

Lavarro moved to table an ordinance scheduled for a second reading at Wednesday’s council meeting which would allow for the project to proceed.

Jersey City Times reached out to Councilman Robinson.  We have not received a response as of this writing.

Highlights from the Mayor’s State of the City Address

Editorial: The Council Should Vote No on Steel Tech
Scroll to top