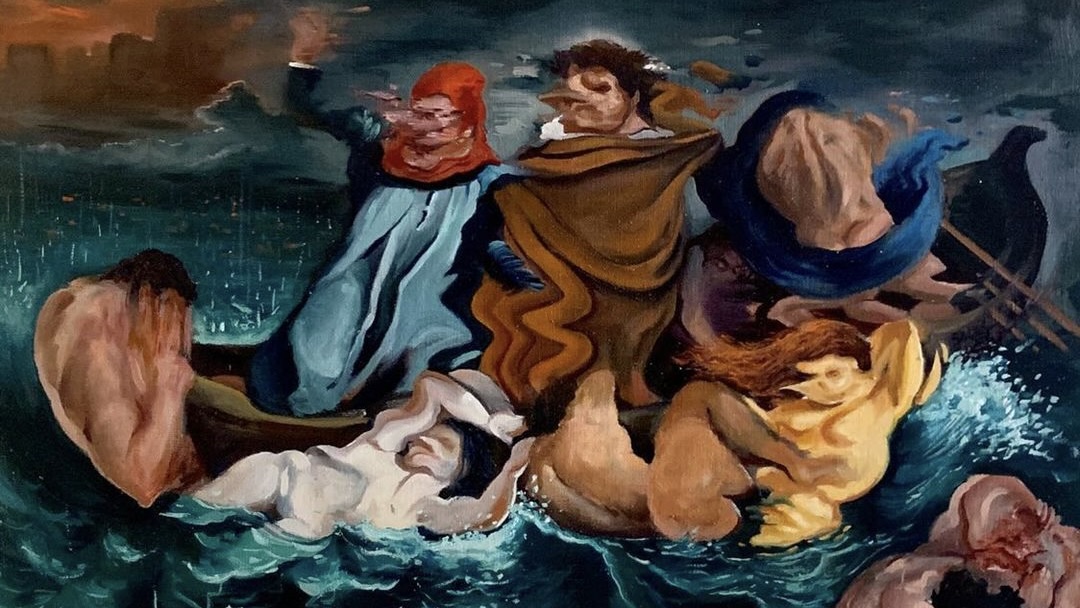 Impact is not generally a pleasant thing to experience.  Bombs make an impact crater; a fist slamming into a cheek makes its impact felt.  An impacted tooth precipitates an emergency trip to the dentist.  Yet artists do often talk about the impact of their work — as if a painting might be a kind of missile, hurled at the consciousness of the unsuspecting viewer from a trebuchet.  Could an artwork shatter your reserve, blow you out of your daily routine, knock you backward, and slap you awake?  Or, given the (evil) spirit of the times, might it be better for us to use a less martial metaphor?

Artists in Jersey City are perpetually ready for impact.  Rent hikes, studio closures, material costs, and the vagaries of chance constantly threaten to upend their communities, thin their numbers, and drive them out of town to easier redoubts to defend.  The Powerhouse Arts District has been a battlezone for years, with developers, community groups, and advocacy organizations all struggling for a beachhead.  Somehow, ProArts has weathered all of that. Right in the midst of the fray, the long-running arts organization continues to put on interesting exhibitions: roundups designed, in part, to let the rest of the town know that its visual poets are still her and still making waves. “Impact!,” curated by multimedia artist Tarik Mendes, is, like all ProArts projects, a survivors’ tale. It is an exciting show, and an illuminating show, but it is not a happy show.  Then again, these are not the happiest of times.

Evidence of impact, emotional and otherwise, is general across Art150 (150 Bay Street, 2nd Floor.)  The gallery will open its doors to the public today and tomorrow at 1 p.m. and keep them open until 4; on Sunday, there’s a mid-show reception that feels like a bit of a closing party too (“Impact!” wraps up on May 30).  Given how much has been going on around town, it’d be easy to skip this one: many of these artists have exhibited widely, and will surely exhibit again, if they aren’t driven far beyond the shores of the Hackensack by the ruptures that continue to shake up the local scene.

But missing “Impact!” would be a mistake. Rarely have the members of the ProArts crew been so frank about their struggles or foregrounded their scars as plainly as they do here.  Mendes has picked pieces that give the viewer a definite push as she walks by: pieces that lead with brokenness, and distortion, and post-traumatic stress.  Sometimes, the fissures are literally visible. Josh Urso, who lays flat, mute, impassive concrete blocks in provocative patterns, or stacks them in precarious towers, gives us a stone tablet shattered: in “Fractured Earth Turquoise,” the face of a little slab looks as if it has met the punishing end of a sledgehammer. Urso has called attention to the breakage by painting each crack bright blue. In a city that’s busy with building material, piled on corners, earmarked for new construction projects, it’s hard not to catch the double meaning of Urso’s sculpture. It’s a comment on the fragility of the built environment, and a reminder of the weight of living under the press of constant development. (It also looks pretty damned cool.)

Urso’s shattered-concrete sculpture has dignity to it, but kintsugi it isn’t. Things appear to be coming apart, breaking down into constituent parts, not falling into place. Psychic deterioration is also evident in “My Own Tempest” a gripping canvas by the reliably dramatic painter Fabricio Suarez.  We’re shown the crew of a canoe at sea, on the verge of being capsized, rain pouring from blue-grey clouds, waves slapping at the little stern, and no land in sight.  Some of Suarez’s figures stand uneasily in the boat, while others have fallen into the water and cling to the sides of the craft.  But the faces of the seamen are the scariest part of this picture.  They’re stretched beyond recognition, features obliterated, twisted into chewing-gum wads by the wind and water.  The main figure, red-hooded and straight-backed, raises a hand as if he’s engaged in an incantation.  Is he dispelling the storm, or is he summoning it?

Other threats are more indirect, but no less palpable for that.  Oil painter Robert Policastro contributes another one of his glowering, sharp-fanged tigers, barely restrained by its diamond-shaped frame and the circular purple background it wears like a collar.  Watercolorist J. Heloise imagines Aquarius, figure for the Age, as a winsome but forlorn woman in blue. Her hand is on her forehead as if she’s reeling from a loss, or maybe she’s about to faint. Behind her bare shoulder is an explosive bouquet of curves, committed to paper in strokes with unusual savagery for a painter who is usually a dedicated channeler of prettiness. The contrast between the carefully rendered figure of the goddess and the swirling chaos in the background speaks loudly of looming danger and persistent anxiety. Volcanic forces are catching up with us. Meanwhile, Cheryl Riley gives us a protest in tall gold letters on white paper: He Was No Angel, her piece reads.  She doesn’t tell us who she’s talking about.  But then she doesn’t have to, does she?

Susan Evans Grove’s experimental photographs often ask us to interrogate our lives lived out of balance with the forces of nature.  “Still Life With Macbook” is her bluntest statement yet, and it would be funny if it wasn’t so unsettling.  She’s recreated the feel of a pre-photographic still life painting, right down to the coloring and the position of the objects on the table. In the place of fruit, she’s stuck motherboards, video cards, and plastic junk from a disassembled computer.  The flowers in the photograph are wilted, and the fruit, naturally, is rotten.  How much digital detritus are we chucking into landfills, anyway?  How much more dead weight can the planet take?  Frank Ippolitto plays with classic imagery, too. In “Immaculate,” his Madonna is caught within a lightbox, head tilted backward and eyes partially obscured, fingertips pressed together as if she’s in prayer.  She could be in cryogenic freeze.  The top of the print is bathed in a computer blue that’s not exactly heavenly, and the shawl that hangs from her arms and colors the bottom of the piece is bright red.  She’s in stasis between two worlds, caught in a moment of indecision, cheeks and shoulders melting into the mist around her.

Meanwhile, Theda Sandiford wheels in a particularly bristly-looking “emotional baggage cart”: a shopping trolley festooned with zip ties, and decorated with lights. Perhaps the shards of eggshell, stained and stuck together like tiles in the world’s most fragile mosaic, in Paul Wirhun’s beautiful, breakable “Drowning in a Puddle of Lust,” came from a carton unwisely flung into one of Sandiford’s carts.  In a context as fraught as this show is, even Deb Sinha’s idyllic painting of the Stonewall Inn, with relaxed-looking men in bunches on the sidewalk, takes on overtones of trouble.  The Stonewall Riots occurred more than fifty years ago. Decades later, we’re still wrestling with questions of equality, and fearing the whims of a hostile Supreme Court. Rights that were hard-won may yet be taken away from us.

Then there is the fascinating, destabilizing work of the curator himself. Tarik Mendes is the show’s loudest voice, and the one most committed to the aesthetic of impact. “Endless Hours,” a large multi-media work hanging near the entrance to ART150, is awfully bossy, and you may walk away bewildered, but you won’t mind spending time in its company. The piece is busy with paint-splatters dripping, and smudges, vicious little polka dots, cartoonish images of wide-eyed, weak-shouldered, hairless humans wearing expressions of dismay, and honeycombs of hexagonal indentations pressed into the paint.  All over the canvas, Mendes has scribbled near-incomprehensible instructions in rough magic marker.  Some of it appears to be directed toward a gallery owner, while some of it could be the ravings of a mad IT person, overburdened with PDFs to make and surplus files to delete.  It’s all coming at us, Mendes seems to be suggesting: construction and planning and blueprints and runaway artistic expression.   We’ve got our hands over our heads like J. Heloise’s Aquarius.  We’re braced for impact. But that’s not going to make the blows any easier to endure.