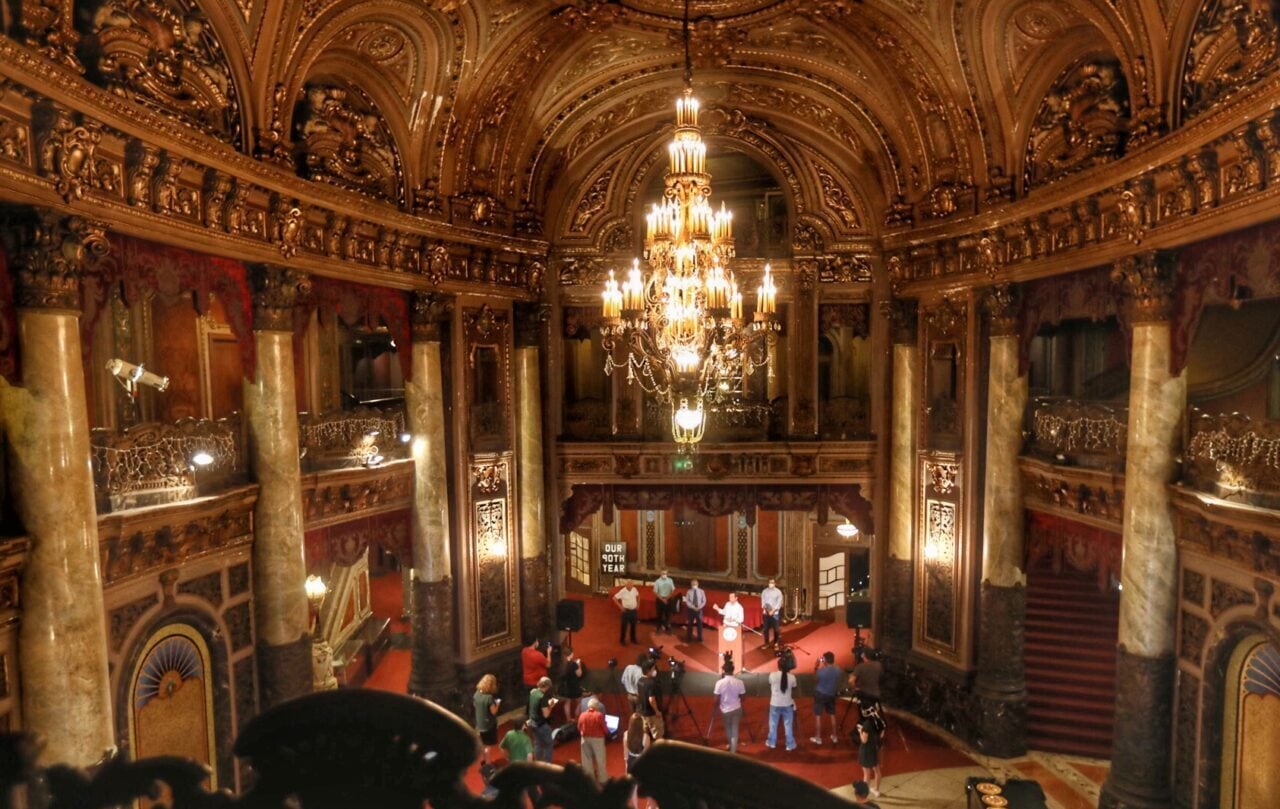 Two former antagonists are uniting in a common goal: to restore the Loew’s Jersey Theatre, one of Jersey City’s last remaining landmarks, and transform it into a state-of-the-art entertainment spot while preserving its historic architecture.

At a press conference held Thursday, June 11, Mayor Steven Fulop  announced that the city will seek a new operator “with international reach” to run and manage the movie palace. Colin Egan, founder of Friends of the Loew’s, which formerly restored and ran the theatre, joined in the announcement.

In tandem with the news, the Jersey City Redevelopment Agency issued a 61-page request for proposals for the project.

The JCRA, the Council, and FOL will review the submissions after the deadline has passed. Once that review is done, the JCRA will award a management contract to the successful vendor, according to City Business Administrator Brian Platt.

“We’re looking for a single entity to restore the facility and to preserve its historical elements,” Platt said, while also booking major performers and professional touring acts and — what Egan described — as “community, nonprofit, affordable” performances.

Platt and Egan both spoke of the desire to maintain the unique ornamental features of the building.  The new operator would likely have to modify the back end, however, to serve as an equipment loading dock.

The Loew’s Jersey Theatre opened in 1929 at a cost of $2 million, according to Mayor Fulop. Redeveloping it, though, could cost $21 million, estimates the city’s consulting architects, HMR Architects of Philadelphia: $4.4 million for life-safety and code compliance; $5.8 million for balcony and production improvements; $9.2 million for theatre improvements; and $1.6 million for optional equipment and upgrades. The theatre will need to be made ADA (Americans with Disabilities Act) accessible. And new heating and air conditioning systems will need to be installed, according to Platt.

These expenses will hopefully be made by the new operator as part of an annual lease payment to the city, Platt said further. But the city is not ruling out alternate payment options — or funding sources. The coronavirus pandemic has affected the city’s budget in ways unimagined when financing of the Loew’s project was originally designed. Fulop maintains that the time for the project is still right given all the developments happening in the area. Much residential real estate development is migrating away from downtown and to Journal Square; a building next to the PATH Station on Sip Avenue is being transformed into a new Jersey City Museum and Cultural Center; and the Journal Square transit hub itself is being renovated by the Port Authority.

The mayor concedes the area lacks the ancillary amenities like upscale bars and eateries that are conducive to supporting a big entertainment center. But, he says, the newly renovated Loew’s could serve as “the core” for attracting those types of businesses.

Egan pointed to similar entertainment-related development efforts in other U.S. cities such as Atlanta, St. Louis, Cleveland, Columbus, Providence and Boston. Those projects, he says, have been successful.

The city hopes the Loew’s theatre will open in its new incarnation by late 2022.

What programming will the sparkling new complex offer — and will Friends of the Loew’s maintain any role at all?

As outlined in the RFP, each year the new operator will be expected to produce at least 20 musical shows by nationally recognized artists, at least 10 theatrical or other stage performances and at least 10 comedy performances. An unspecified number of private bookings will also be allowed.

Although the city and FOL had waged a seven-year legal battle over stewardship of the Loew’s – with the FOL’s prevailing after a court validated its lease of the property — the lease expired recently, and both Fulop and Egan said Thursday the time has come to bury the hatchet and look to the future.

FOL will remain involved in both the renovation and the programming. It will have a say in all matters pertaining to the design and construction proposed by the new operator; it will continue relying on volunteers to help with touching up and cleaning the highly detailed ornamental fabric of the building; and it will arrange for inspection of the building at least once a year to ensure that the fabric remains preserved.

The grassroots group will still produce some shows, as well. FOL will have the right to present commercial and non-commercial events with a range of cultural partners on no fewer than 55 days each year.

To review the RFP on the Loew’s Theatre, visit TheJCRA.org and download the relevant posting.

For other articles in our coverage of the Loew’s Jersey Theatre, click here.