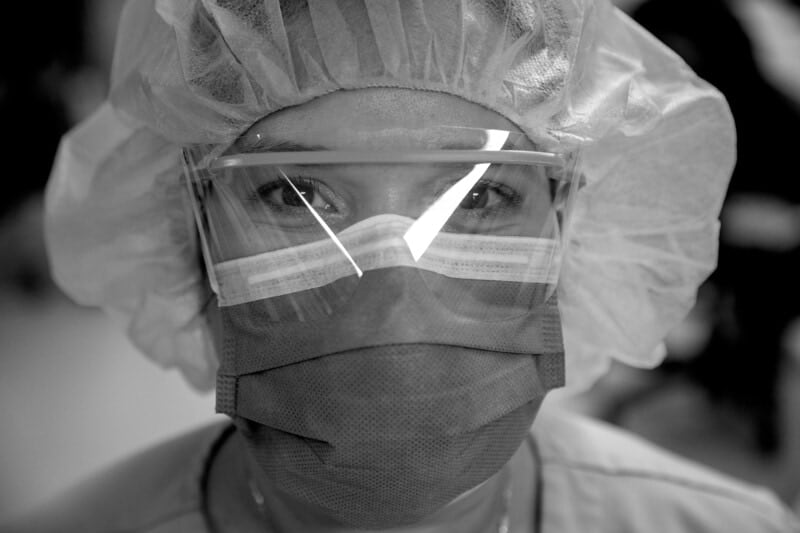 Pam Tavarone, a veteran  ICU nurse at St. Mary’s General Hospital in Passaic, suited up for work last Friday in the makeshift safety uniform she had been wearing for the past week and a half — a white Tyvek painter’s suit, goggles and an industrial-grade respirator mask — all of which she had acquired herself. Supplies of personal protection equipment at the hospital were in short supply. The heavy-duty mask had left bruises on each side of her nose from her 12-hour shifts.

But on this particular day she was uncommonly troubled. She had been experiencing tightness in her chest and shortness of breath for three days. “I could feel something was going on. It was knocking me out,” she said. Her “gut” was whispering  bad news. She has a history of asthma; two of her three daughters have underlying conditions — diabetes and asthma. She needed to be tested.

At first, “they didn’t want to give me a test, because I didn’t have a fever. But I pushed, and they gave in.” The results came back Saturday: Her gut was right; she was positive.

Now, Tavarone is quarantined in her home. At first, the hospital refused to prescribe medication for her, she said. But again, she “pushed” and they relented. She is taking hydroxychloroquine (Plaquenil), the experimental anti-viral drug, which has yet to be confirmed effective for COVID-19.

Tavarone is stressed, she is afraid — more for her children than herself — but remains resolute in her optimism, a common trait of ICU nurses. She blames no one. She did everything she could to protect herself, and she harbors no ill will for a hospital outmatched and overrun by the pandemic. An administrator told her that reinforcements in the form of nursing volunteers will arrive Tuesday. And “they keep tell us they’re trying” to get more gear,” she says.

Not all of her colleague feel the same way. At least three nurses at her hospital have already contracted the coronavirus, Tavarone said, and four have resigned out of fear — two walked out and two have given notice. Nurses there are given one mask and one gown per shift. Some have taken to wearing garbage bags over their flimsy plastic gowns. Fear has consumed the hospital. Morale, she says, is “sub-zero.”

“During this current COVID-19 outbreak, we are experiencing the same trials and challenges as every hospital in New Jersey and the nation,” wrote Vanessa Warner, a spokeswoman for St. Mary’s. “We are completely focused on the safety of every member of our staff and each patient they so valiantly care for.”

The depletion of personal protection equipment (PPE) and a shortage of nurses, has caused anxiety to rapidly escalate among frontline health care workers throughout New Jersey and beyond. It is a problem that won’t be solved until more PPE can be produced. But hospitals like St. Mary’s can’t close down in the middle of an outbreak because they lack protective equipment. They must soldier on.

Some nurses told to store masks between shifts

“When COVID patients first began arriving at our members’ facilities, medical workers changed gowns and masks after each encounter with an infected patient,” said Douglas Placa, executive director of JNESO District Council 1, the union that represents 5,000 nurses in New Jersey and Pennsylvania, including Tavarone (who is her local’s president). “Soon, they were instructed to  keep their protective gear on until the end of their shift. At some hospitals, nurses are now being told to store their masks in a paper bag between shifts.”

For reasons hard to understand, the dearth of masks, gloves and gowns continues to plague America. The federal stockpile is deficient and the manufacturers thus far have been unable to meet the overwhelming demand. Hospitals and state governments are engaged in international bidding wars to purchase masks for exorbitant prices. President Trump has invoked the Defense Production Act, but has not yet ordered U.S. manufacturers to produce more medical supplies.

For New Jersey nurses, it certainly did not go unnoticed when two New York city nurses died from COVID-19 in the past two weeks. New York is the epicenter of the coronavirus in the U.S., and New Jersey is ranked second. Passaic County, where St. Mary’s is located, ranks fourth in the state with 3,227 cases and 42 deaths. Cases continue to spike and both states expect that to continue for weeks.

Nurses here wonder if Europe is providing a terrifying preview of what’s in store. In Italy, France and Spain, where hospitals have been overrun by the pandemic, more than 30 health care professionals have died of the coronavirus, and thousands of others have had to self-isolate. In Italy alone, more than 11,000 medical personnel have been infected.

The message from Italian doctors

A group of doctors from a hospital in Bergamo, Italy — treating more than 4,000 COVID-19 patients with just 48 ICU beds — offered this sobering account in the New England Journal of Medicine:

“We are learning that hospitals might be the main Covid-19 carriers, as they are rapidly populated by infected patients, facilitating transmission to uninfected patients. … Health workers are asymptomatic carriers or sick without surveillance; some might die, including young people, which increases the stress of those on the front line.”

While Tavarone and her colleagues have been jerry-rigging their own safety equipment, one South Jersey nurse was reprimanded and sent home for bringing in her own mask — the coveted N95, which is in short supply across the country.

Dawn Kulach, a nurse at Virtua Voorhees Hospital in Camden County, was elated when she was recently informed her COVID-19 test result was negative. She had been placed in mandatory quarantine, suffering only from pneumonia. It meant that not just she, but her spouse and son were OK. But her relief and her sense of well-being were short lived.

When her fever subsided, she returned to work last week. Knowing the hospital was also perilously short of PPE, she turned to her personal supply. She knew the precious N95s were being kept under lock and key at their hospital and given only to those dealing directly with infected patients, which she was not. She had been able to accumulate a couple dozen N95s on her own.

As she was preparing to leave for work, her 10-year-old son started crying. He pleaded for her not to go, Kulach said. She showed him her mask, and assured him it would keep her safe.

‘Thinnest mask I have ever seen’

Upon her arrival she was taken aback when no one took her temperature, or anyone else’s, before she entered the building. She reported to her unit, a pulmonary unit that included coronavirus patients and was handed “the thinnest mask I have ever seen.” She wasn’t assigned any confirmed COVID-19 patients, but three of her patients had heavy coughs and fevers. “All safety protocols have been thrown out of the window,” she said. She put that mask over her own N95.

She was soon confronted by a supervisor, taken to a conference room with a security guard standing silently by. She was told to remove her unauthorized mask. She refused, saying “if the hospital can’t protect me, I have to protect myself, my patients and my family.” She said her manager then ordered her “to clock out and go home.” And then the kicker, according to Kulach: “She strongly suggested that I rethink my career.”

“Conflict between hospital administrators and medical staff is becoming widespread,” Placa said. “The main topic of concern is the appropriate use of PPEs and safety of our members and their patients.” Placa said he was informed by one nurse that “she was given a mask and management told, ‘Use this for the week.’”

Kulach is scheduled to meet on Tuesday with her superiors to discuss her employment status. She fears she will be fired.

She will be accompanied by a union rep and intends to tell hospital officials that “this is not what I signed up for. … I didn’t go into disaster nursing, and we are not getting any disaster pay. … I have the right to protect myself and my family. I didn’t refuse to treat patients. … If I have the means to protect myself, I’m going to.”

If they don’t let her wear her own N95 mask, she said she simply will not return to work. “I promised my son I would wear the mask. … Maybe I will have to rethink my career.”

Dr. Reginald Blaber, executive vice president and chief clinical officer for Virtua Health, Virtua Voorhees’ parent company, declined to comment on Kulach’s situation, but did offer this: “The collective good must supersede any individual’s choice or desires during these challenging times.

“Like all health systems in the country, we are working with a limited supply and an ongoing shortage of N95s and other forms of personal protective equipment.

“Recognizing the global shortage of supplies, we must be meticulous stewards of our resources so we never find ourselves without what we need.”

Told of Kulach’s story, Tavarone was supportive: “I guess they would have sent me home every day.”

In the meantime, Tavarone is riding it out in quarantine. But now her husband has developed a cough, and she said she will “push” to get him tested. And when she recovers, she said, she will return to work.

She had lost track of the death count at St. Mary’s, but last week, before she was tested, she and her colleagues “celebrated our first success story” when one of their ICU patients became well enough to be discharged from the unit.