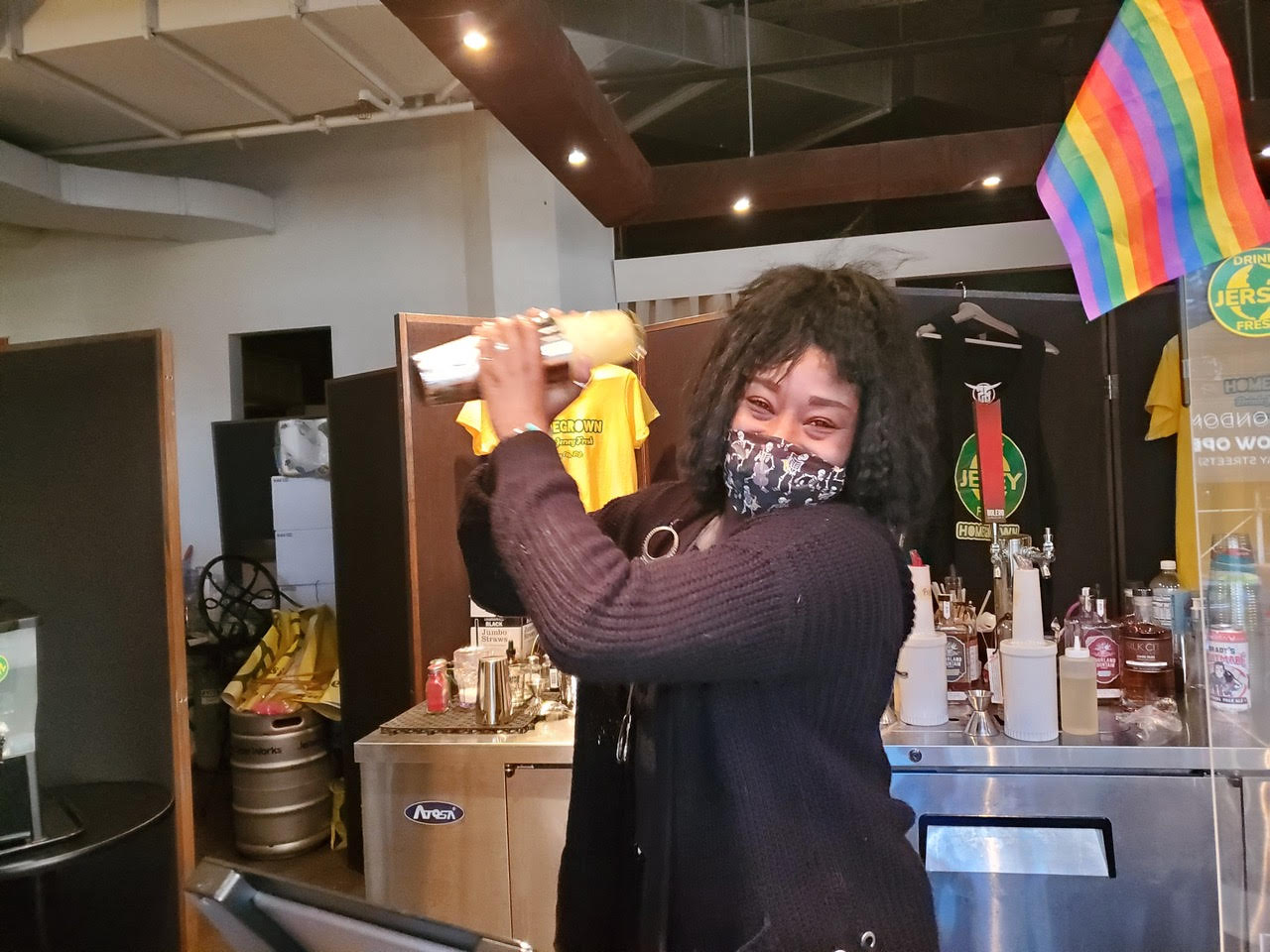 Note: Homegrown has announced that it is permanently closing on March 1, 2021.

While the pandemic steam rolled many businesses out of existence, one bar sprung up in a wasteland. Homegrown opened on July 18 in the Power House Arts District, a neighborhood now known more for its luxury loft condos than for art.

Kennedy Grey, founder/general manager/bartender, gestured at the landscape of warehouses. “Where is there anything interesting? Where is depth and life in this?” We sat on top of the elevated walkway that used to be a loading dock for packing materials on and off trains from 150 Bay, the historic A&P warehouse. The old train tracks and cobble stone are still visible. When we spoke, it was the end of summer, the one-year-anniversary of her partner’s passing, and two months since the opening of Homegrown. 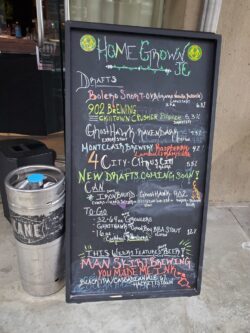 A singer/songwriter, Grey, nee Shayna Francois, seeks to inspire and create community and make craft alcoholic beverages accessible. Homegrown’s concept is simple: all the good booze produced in New Jersey you can drink. If you’ve ever wanted to get drunk on New Jersey, Homegrown is the place to be. The motto is “Drink. Jersey. Fresh,” and it exists to showcase the best booze Jersey has to offer. All beer, cider, spirits, hard seltzer, and even wine are from New Jersey. There are seven rotating draft lines, lots of cans, and 32-ounce bombers of their signature cocktails like The Iron Bound. Homegrown is a gateway to the intoxicating flavors of New Jersey, and Kennedy Grey is the ambassador. Homegrown opened at a time when everyone was staying home and everything they serve is from New Jersey, thus “keeping it home.”

No one seriously discusses the terroir of New Jersey. Historically, New Jersey is known more for its toxic waste than its wine. However, there are over 50 wineries here, and at Homegrown, local wine producers like Unionville or Alba are featured monthly showing that our verdant farms can produce a quality chardonnay as well as the sweet fruit wine historically associated with New Jersey.

There is a beer “tap takeover” at least once a month featuring breweries not often found in Jersey City like Four Cities Brewing Company from South Orange. Frequently, Ghost Hawk of Clifton is on draft. Tom Rachelski, founder of Ghost Hawk Brewing, was a friend who became involved in nurturing Homegrown when Grey first featured his beer. Ready with friendship and advice, he helped Grey curate the beer menu and navigate uncharted waters as a founder of a new business. She calls him their “unofficial beer guide.”

“Craft beer has a level of pretension. We can have things without it being pretentious. Get together with your friends and have a beer. Like wine, you recognize different flavors,” said Grey. Grey, who grew up in Montclair, says one of her best sellers is Montclair Brewery’s raspberry lambic, a fan favorite.

She says that for people who usually drink Bud or Corona, Homegrown is an “introduction to craft without scaring them.”

The same goes for the cocktail menu: Keep the profile simple, showcase the spirits. She enjoys visiting distilleries to get a better appreciation of the product and tries to bring that enthusiasm into the bar with monthly spirits tastings and cocktail-making classes. People can learn to make Homegrown’s signature cocktails by pros from distilleries such as All Points West and Sourland. These classes usually run $20–$40. After the class, there is an all-night happy hour for students, a great date night.

Grey’s first job in Jersey City was at the now-closed Talde. She has hosted and booked at the now-closed Citizen, “where I got my sea legs,” she said. As a former bartender/host/dog walker/pet sitter, Grey now finds her role an entrepreneur in the bar industry humbling, “I learn something about the industry and myself every day.”

She wonders, “Maybe I’m not aggressive enough for this industry. When I look at my neighbor, I don’t look at, what do they have that I don’t. I look at—do they have enough?”

Her goal is to add to the life of the Powerhouse Arts District and keep 150 Bay Street a destination. Homegrown is an experience just like every spot on the strip. Noticeably, Departed Soles, the brewery next door, isn’t currently on the menu. She said “They’re right there. They might want to sell their own beer, have people experience their brewery.” Departed Soles, along with Bucket and Bay, helped transform the strip into a destination (though unfortunately Bucket and Bay recently closed).

No one was as surprised by Homegrown’s opening as Grey herself. “If someone would’ve told me that within a year, we’re full circle—went from being jobless, displaced and grieving, to open up a place during a pandemic. There’s no certainty.”

She was devastated by the loss of her partner in September, and afraid of what comes next. In March the shut down happened, and it gave her a lot of time to put things in perspective. Grey said, “Life was giving me lemons. And I said, ‘Fuck you. I’ll open a bar.”

In Marcch, she began discussing the rebranding of Headroom Bar & Social at the same location, with the owner of the space, Howard Brunner. The space itself is cavernous. It’s capacity pre-Covid was 575; now it’s 142, split between Shell N’ Tail, a seafood restaurant, and Homegrown. (A lot of the space was lost due to indoor dining regulations.) They have regular DJ’s almost every weekend and Grey is planning on having more live music. She even hosted Jersey City Pride in August. Grey plans on hosting monthly art shows and mixers with local business owners to connect the community, possibly even animal adoption events with animal rescue groups.

November 3rd Board of Education Rematch