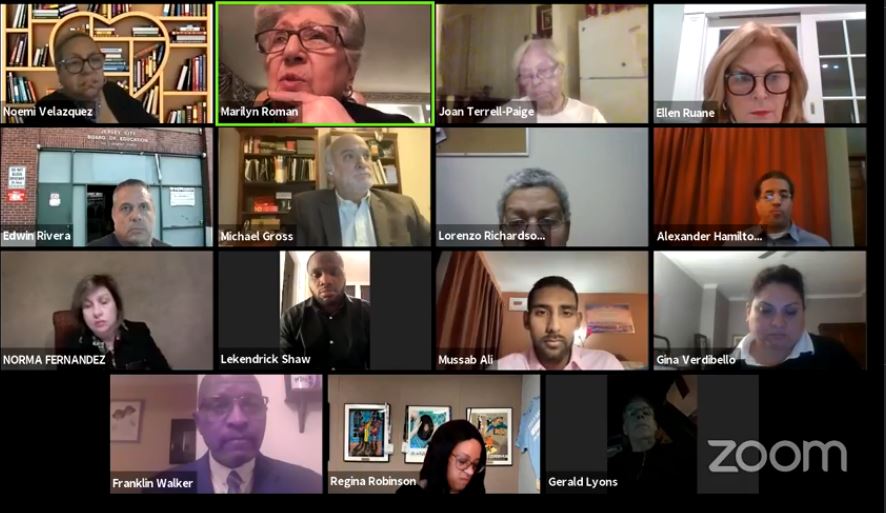 Members of civic group Jersey City Together urged the Jersey City Board of Education to fully fund the city’s public schools at Monday’s listening session on the 2021-22 school budget, at which board trustees said the district is in need of more money from the state.

Reading from a letter Jersey City Together sent to Superintendent of Schools Franklin Walker and the board, Nancy Pokler said, “You can and must propose and pass a fully funded, initial budget, one that meets the needs of our city’s children.”

The group’s request is based on surveys and small group listening sessions with 1,000 residents.

Jersey City Together’s letter says the New Jersey budget is expected to cut $83 million in state aid to the Jersey City Public Schools, as estimated by the Education Law Center, and the city’s payroll tax is expected to deliver approximately $20 million less revenue for the schools in the 2021-22 school year.

Education Law Center Research Director Danielle Farrie was quoted in the Jersey Journal about the potential for the district to lose $83 million in state aid. She said the cut would bring the budget shortfall to more than $350 million and leave the district with few options to fill the gap.

The estimate from the Education Law Center is higher than what the superintendent estimated in November 2020, when he spoke of a coming shortfall due to a $30 million cut in state aid.

Pokler and Brigid D’Souza, who also spoke at the meeting, signed the letter as members of the Jersey City Together Education Core Team. 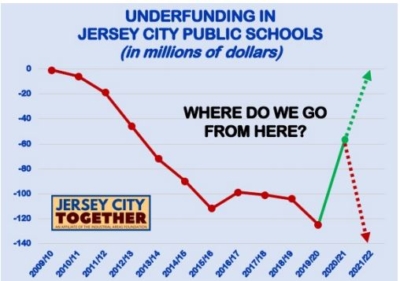 “As a parent, I am seeing at home the impact of underfunding,” said D’Souza.

D’Souza told the board her son is on a Zoom call with more than 30 students in his fourth grade class each day. “I see him getting lost in the calls, not because of any deficit on the teacher’s part, but just because the class size should be smaller,” she said.

“I ask you to please define adequacy so the public understands what a fully-funded budget should look like,” said D’Souza.

Board president Mussab Ali acknowledged, “it’s no secret that we have been underfunded for more than the last decade.” He said the district is currently underfunded by $57 million from the state, which is below the state’s own adequacy standard.

“We’re expecting between an $80 to $90 million dollar additional cut,” on top of being underfunded, he said. “If we were just to raise taxes $90 million dollars, all we’re doing is catching up from the hole the state’s about to put us in.”

For the 2020-21 school year, the board approved a $736 million budget that increased the school tax levy by 39 percent.

Board trustee Marilyn Roman said in last year’s budget process, the board “bit the bullet” in asking the public to approve a budget that would raise taxes.

“Our children not only have problems in terms of their learning but they are in dire straits in some instances when they are outside of school as well,” she said. Looking toward the future, Roman said the board needs to find a stable source of funding for the schools.

Also at the meeting, the superintendent said more details on what a school district re-opening would look like will be shared next week. In January, the board decided to keep learning remote for the third marking period at least until April 23.

He said the re-opening process involves a school readiness assessment using recommendations from the Centers for Disease Control and Prevention (CDC), holding meetings with staff, conducting walkthroughs and reviewing the findings with the health department.

Jersey City Public Schools’ reopening plan, which includes a building readiness document, has been posted on the district website.

Vaccine Q&A: How can I Get an Appointment? Why are Smokers Prioritized...
Scroll to top