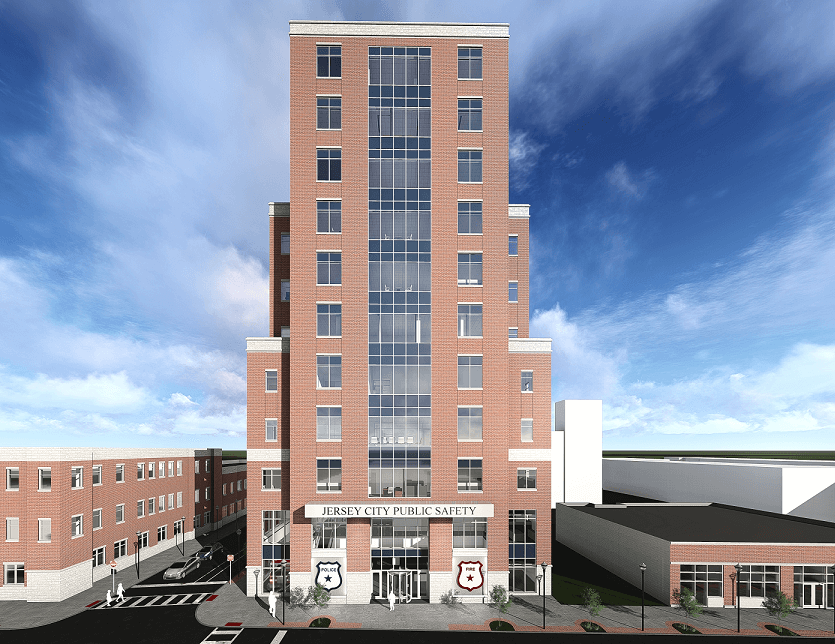 The headquarters will join the already completed Health and Human Services Offices, Housing Preservation Offices, Housing and Economic Development offices and Jersey City Employment and Training offices. Construction is expected to be completed in 2022. Mayor Fulop predicted that the city would save money over the 30 year term of the construction loan when compared to paying rent as the city does now.

Standing next to the mayor, Shea said, “This is a seven year dream for us. When the mayor interviewed me to take this job, this is one of the things we talked about—moving our public services, our police, our fire, our parking, our 911…into parts of the community in Jersey City that don’t have the investment that other parts have.” Shea predicted that the new building will allow for a unified 911 system that could cut a minute off of 911 response times. 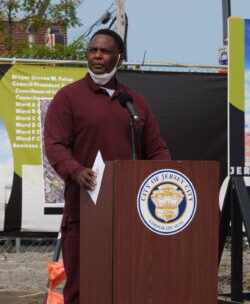 City Council President Joyce Watterman recalled, “When we took office in 2013, it was a challenge to get investment coming this way.”

Councilman Jermaine Robinson spoke of its significance to Ward F:  “This right here is a grand slam. It touches on a lot of things that the mayor talked about previously. It touches on the businesses that this building and the rest of the investments in this neighborhood will be able to help bring here and fund. It’s touching on the property owners who need to have these services, and the services are going to be right here in the heart of Ward F….I remember we had a meeting with a pizzeria chain, and the day that the pizzeria came here there was a shootout right here, and the pizzeria backed out. Today, we are saying no more. We are bringing resources here, and we are going to make sure that we do everything we can for Ward F.”

Eric Moore of Brandywine Financial Group noted the rising business interest in the neighborhood: “Now we have multiple tenants trying to outbid each other to go into the [shopping] center. I don’t know if we could have ever though that.”

Bernard Shivers, a minority contractor who worked on two of the finished buildings spoke emotionally. He applauded Mayor Fulop for living up to his word which, in turn, made Shivers want to get more involved. “I’m gonna help my community no matter what….Now we have the community being a part and building the community, that’s the difference….now you’ve got minority contractors becoming real contractors and not getting the door shut in our faces like we always have.”

Michele Massey, president of the Jackson Hill Main Street Special Improvement District expressed excitement over the project but had  cautionary words. “Now we have to address north and south of this site.  One, two, three buildings are not going to holistically improve the entire area. So the work will continue. It has to continue.”

Up to 40,000 NJ Unemployment Claims Still Backlogged
Scroll to top