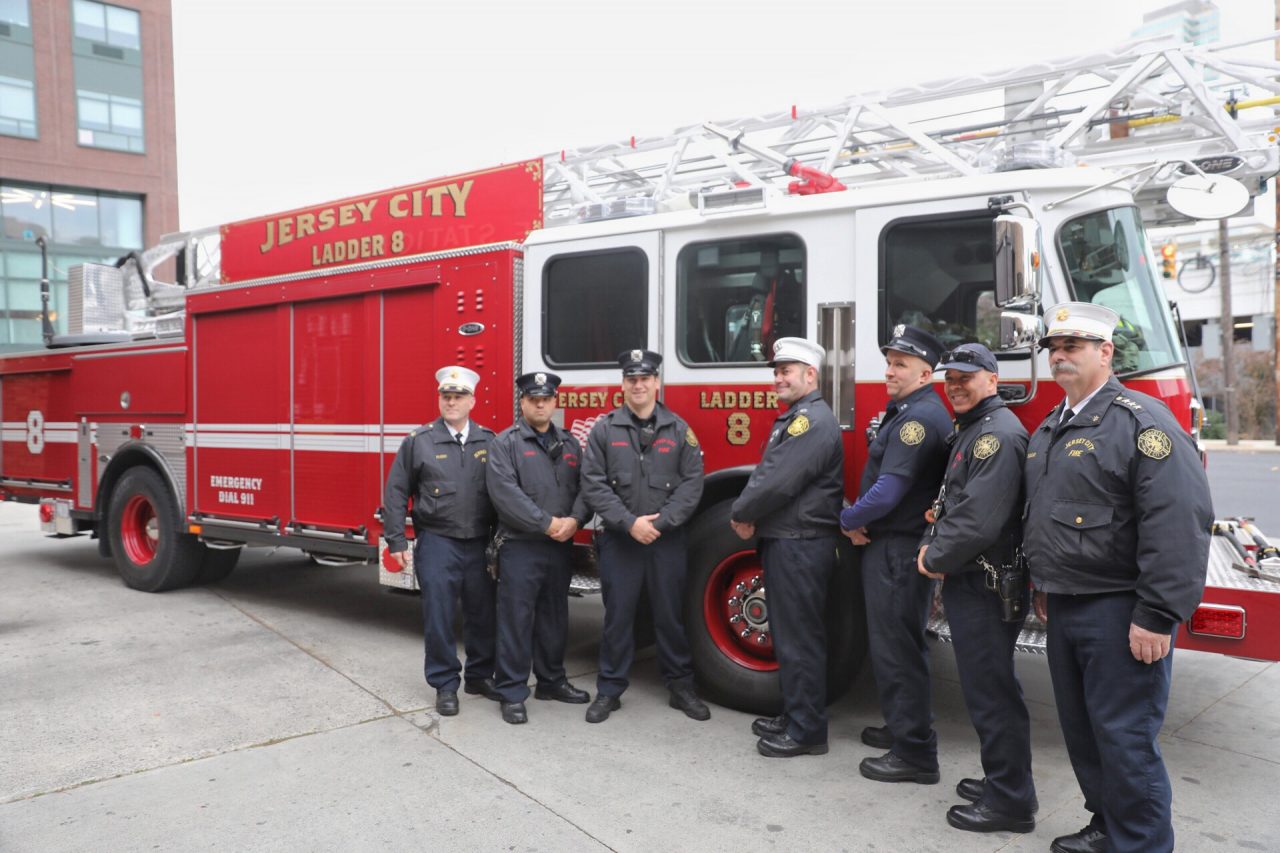 Once an area of disinterest and neglect, Jersey City’s Greenville ward is getting more attention from the city’s current administration in the area of public safety.

On Nov. 7, the city rolled out its latest addition to the municipal fire department arsenal with a blessing by the city fire chaplain, Rev. James Pagnotta, of the newly-acquired 100-foot E-One Metro aerial ladder truck.

Jersey City Fire Chief Steven McGill said the brand -new rig is being assigned to the 2nd Battalion firehouse at Bergen and Van Nostrand Avenues and will replace a 2004 aerial ladder truck that now will be used as a spare. Fifteen years is considered the typical life expectancy of a fire rig in an urban environment, he added. 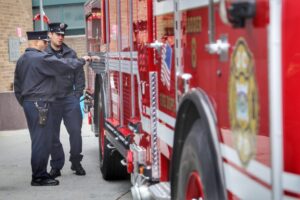 “This is the first vehicle we’ve replaced since 2015,” McGill said, when the city shelved Tower Ladder 6 from the firehouse at Newark Avenue and Merseles Street. In 2013, Ladder 12, also from the Newark Avenue facility, gave way to what the chief called a “demo” model; and, in 2008, a new ladder truck originally destined for the Chicago Fire Department arrived in Jersey City as a new Ladder 11 at the Kearny Avenue firehouse in West Side.

Mayor Steven Fulop said his administration “has tried to invest in public safety resources in the last few years,” – and the new apparatus represents “another step in that direction to get the fire department needed resources.” Two more rigs on order are now being built, and their arrival is anticipated by summer 2020.

Acquired from a Florida manufacturer under a lease-purchase arrangement through the Houston/Galveston Cooperative, the new ladder truck took eight months to build. The city has 10 years to complete the payments.

McGill said the new 38-foot-long rig’s front-end suspension and low center of gravity will allow for better maneuverability through the ward’s narrow streets and tight intersections while responding to emergencies. A larger cabin, improved emission controls, and carcinogen-free interior make the apparatus safer for firefighters, he added.

The new vehicle is being placed in Greenville, according to a city announcement, because that ward “has been identified as an area of the city in need of updated fire response tools.”

According to the JCFD’s Fire Analysis Report for 2018, of the 27,172 fire incidents citywide reported, 9,579 occurred in Greenville — by far the most among the city’s four battalion areas. (The others are listed as Downtown, the Heights and Bergen/West Side.)

Those stats showed Greenville fared slightly better than the year prior when the JCFD logged 9,684 fire incidents for the ward — again the highest among the 27,628 citywide.

Figures for 2019 are not yet available.

Greenville can benefit from the new aerial ladder rig, said Councilman Jermaine Robinson, because “there are a lot of new buildings in the ward that are 50 to 200 feet high,” including a 10-story Public Safety headquarters the city has planned for Martin Luther King Drive and Kearny Avenue and a 16-story mixed-income residential tower with close to 300 units that is “in the works,” he said.

Another JCFD infrastructure shot in the arm upcoming for Greenville, according to McGill, is the renovation of the century-old firehouse at Ocean Avenue and Dwight Street housing Engine 22 and Ladder 4. “The front façade is falling apart, and brickwork needs fixing,” McGill said. The city has advertised for bids, and once a contract is awarded, the work should take “a few months” to complete, he said.

A new firehouse is on the drawing board for the Bayside community, north of Society Hill, “on the fringes of the 2nd Battalion, to keep our response time to three to four minutes,” the chief said. “Our goal is to have a developer [pay for] that.” But that facility could be “three to five years” from completion, he acknowledged.

JCFD personnel got a morale booster with the recent promotion of Firefighter Enrique Vasquez to the rank of fire captain. He replaces Capt. Brian Lowery, who retired Nov. 1. McGill said the move ensures that the department maintains its ordinance strength of 140 captains “to maintain 26 fire companies.”

A fire captain’s annual base pay is $109,815 in Jersey City, but since he has 15 years of service with the JCFD, Vasquez will earn $116,404 with longevity added on, according to city finance records.

Vasquez, who grew up on Danforth Avenue, went to Public School 20 and then Marist High School before enrolling at New Jersey City University where he graduated with a fire science degree in 2003.

The 42-year-old, who has served as a lifeguard for the city’s recreation department, credits his mother with putting the idea of a career in firefighting in his head. “After I finished high school, I wasn’t sure what I wanted to do, and my mom said, ‘Why don’t you take the [Civil Service] test for firefighter?’ She said it would be a good fit for me.”

Vasquez followed her advice and was hired by the department in January 2005.

He’s actually the second member of his family to be a uniformed employee as his dad served in the army for a decade.

His fellow firefighters from Ladder 12 on Newark Avenue were on hand at the city hall promotion ceremony to celebrate his good fortune.

Slowly but Surely, the Poured-in-Place Concrete Skate Park is Coming
Scroll to top