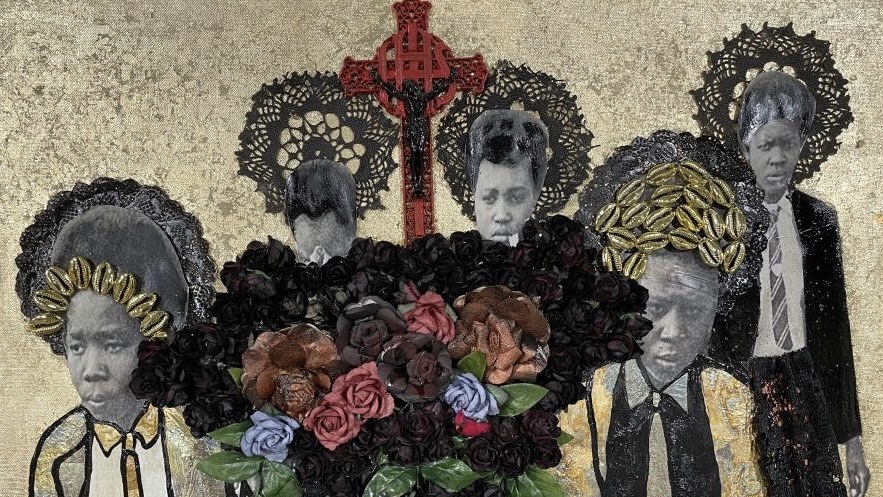 Tucked away in a tidy, unassuming gallery at the end of a hall in the middle of the third floor of the massive MANA Contemporary complex (888 Newark Ave.), there’s an explosive show going on. “A Message From The Underground” is a chorus of protest from deeply unsettled voices — eighteen artists who are making their feelings of marginalization and dispossession manifest. The paintings and sculptures in the show, which was curated by MANA artist Maria De Los Angeles, are as loud as they need to be, which, in some cases, is quite loud. There’s an oil painting of a mad, marble-eyed dog, emaciated, mouth open and flashing fangs, by Robert Roest. Anthony E. Boone drenches his sculpture-like paintings in black acrylic as slick as an oil spill; both a massive butterfly and a madonna and child get gummed up in the works. Then there are the accusatory stares of the tiny porcelain Kachina-like sculptures by Ahrong Kim, and the hand-woven image of “Momma’s Last Passport,” by the imaginative fiber artist Nick D’Ornellas, with poor Momma going blind and fading like a sun-whitened Polaroid into the warp and woof.

Many of these pieces are devastating. Most of them are beautiful. All of them confrontational. They demand attention, and you’ll have an opportunity to give it some of your own on Tuesday, Dec. 14 at 4 p.m. MANA, usually closed on weekdays, will open for three hours for a meet-the-curator event in the third-floor gallery. Should you go (it’s free with an RSVP), you’ll be impressed. And you might well wonder, as I did, why MANA has surrounded this talkative and provocative show with so much insulation — as if it is made of plutonium, and stashed deep in a reactor core. On my recent visit, ground-floor signage for “A Message From the Underground” was minimal at best, and nobody working at MANA seemed to know whether the exhibit was even on view. I took an unmarked elevator to the third floor, and when arrived, there wasn’t even an arrow pointing to the gallery. There’s been very little publicity for the show, which is eyebrow-raising, given the care that’s gone into its assembly and curation and the well-earned reputations of the artists involved.

“A Message From The Underground” was the highlight of a Saturday visit to MANA that was, once again, a pleasure and a puzzlement.  Taken as a whole, the works on view compared favorably to those at most Manhattan museums: the terrific Warhols on permanent display, the Dan Flavin light-hallucinations, the fantastic wall-drawing, left over from the “Implied Scale” climate-change show, of the Hokusai tsunami of rubbish, the Rammellzee boxes, and John Chamberlain’s crumpled-machinery sculptures. The note on the wall suggested that the textile exhibit “Materialistic,” with its futuristic fabrics and delicate arrays of repurposed cloth hanging in the air like frost-crystals in a flurry, had closed before Thanksgiving. But there it was, still up, and still well worth getting lost in. In my last article/complaint about MANA, I mentioned that “Arnulf Rainer: Crosses and Angels” wasn’t on view anymore. I was wrong. I was taking the word of the website, which suggested that they’d packed up the canvases on December 26, 2020.  Nearly a year later, Rainer’s dramatic, audacious show, a spiritual experience in spite of its own irreverence, is still hanging in a gymnasium-sized gallery on the main floor. I’m glad I disbelieved MANA Contemporary dot com — a confusing website even when it’s accurate! — and investigated for myself.

It’s worth noting that all of this richness is completely free to explore. A ticket to MOMA PS1 — the famous Queens art space that MANA, at its best, resembles, mightily — will cost you ten bucks. PS1 is part of the Museum of Modern Art; MANA doesn’t call itself a museum, but the experience of wandering its galleries absolutely trounces that of most other Garden State arts institutions.  The permanent (or semi-permanent) collection alone ought to draw visitors from all over the region to Jersey City.  On the way to “Message From the Underground” is a gallery displaying Fred Sandback’s audacious ceiling-to-floor sculptures of colored thread, teasing the eye, strumming away, bard-like, on ideas of depth, line, and perception. It may put you in mind of the recent Lygia Pape exhibition at the Met Breuer, or some of the more austere side-galleries at the Whitney, and make you wonder what work this strong is doing in a silent side room of the third floor of an arts facility that’s only open for a few hours on Saturdays.

Maria De Los Angeles has a few pieces of her own in another semi-hidden show that’s been vaulted even further from street level. “The Language of Color,” curated by MANA artist Geraldine Neuwirth, is an exercise in abstraction featuring six female artists, each with a distinctive approach to pigment and shape. Neuwirth’s meet-the-curator event happens two days after De Los Angeles’s — it’s from 4 p.m. to 7 p.m. on December 16 (RSVP here), and it’s on the sixth floor of the building. This, too, is a show worthy of a metropolitan museum, with impressive work by Neuwirth herself, the transcultural hallucinations of Orange Li, Osmeli Delgado’s delicate rectangles teased into screen-staticky life by drapes of strings, and Iris Kufert-Rivo’s painted skylines of towers, prisms, and planks.

Those of us who know about MANA are, often, the only ones in the room when we’re looking at these galleries on a Saturday, and that solitude can occasion some profound reflections. It’s tempting to want to put away the bullhorn and keep all of this aesthetic wealth to ourselves. But to do that is to disrespect the artists, who seem quite determined to communicate to as many people as they can reach. Pieces like those in “A Message From The Underground” were fashioned from places of pain, and the sense of social mission in Maria De Los Angeles’s show is immediately evident. These paintings and sculptures meant to upend up the assumptions of viewers and shake us out of our complacency; they’re aimed right at our hearts and our minds and our picket lines. They’re designed to be seen.  I say, with some emphasis: go see them.

Featured Photo: Danielle Scott’s “Black girl, I know how much it hurts,” from “A Message From The Underground.”