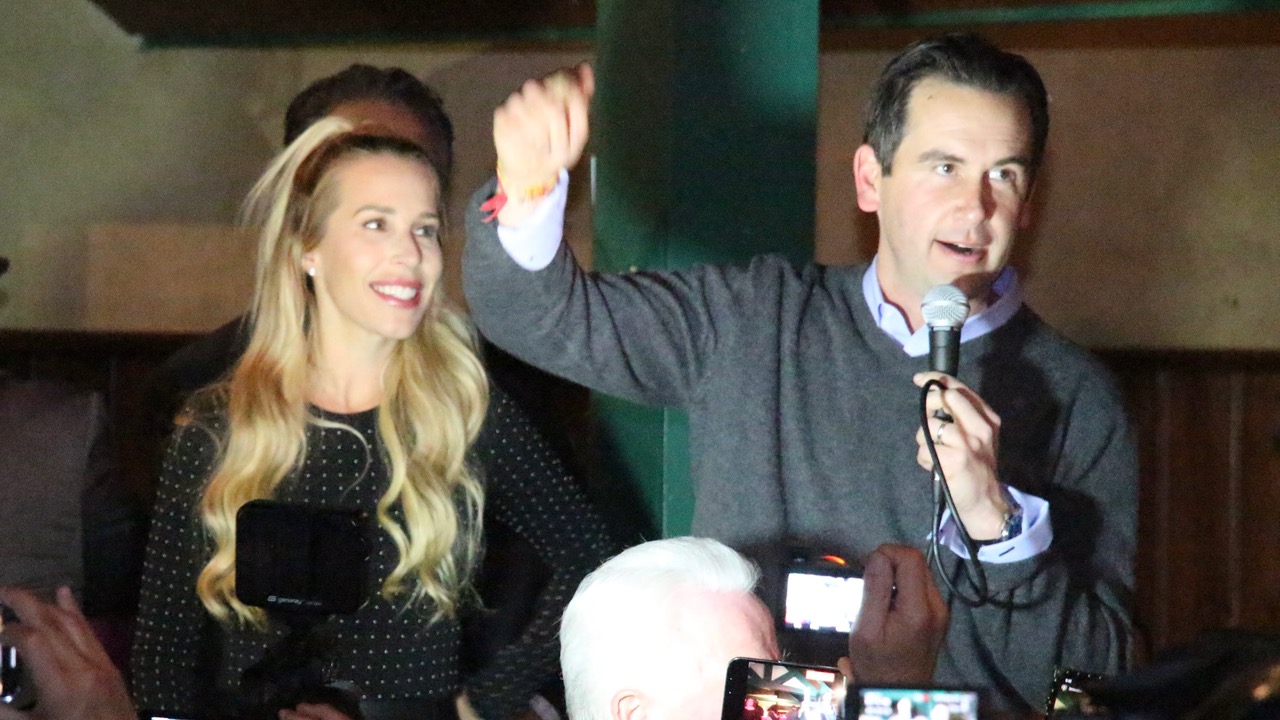 Solomon and Gilmore Prevail in Wards E and F

Mayor Steven M. Fulop earned a third term last night with a convincing win over political newcomer Lewis Spears. With all 183 districts reporting, Fulop raked in 68 percent of the vote. The win represented only the third time in Jersey City history that a mayor has been reelected twice.

From a stage at Downtown’s Zeppelin Hall, the mayor told an adoring crowd, “In eight years you make some tough decisions and along that way people are happy with you and some people find your decisions challenging. …You’d be hard pressed to say that over the last eight years we haven’t made a meaningful difference in Jersey City.”

Spears was upbeat in a prepared concession statement. “I want to thank every independent candidate running for office this year. We made this city shake … Frank Gilmore, congratulations on your victory tonight! I hope that Mayor Fulop has heard the people of Jersey City. We were loud today. We want and need change, and we demand to be heard.”

Neither Spears nor the Mayor acknowledged the other in their statements. 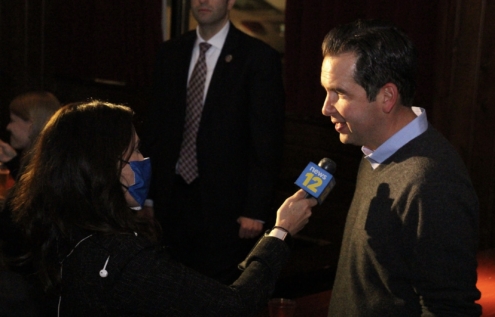 In the two most hotly contested wards, the mayor came up short however. In a mirror image of the mayoral race, 68 percent of Ward E voters reelected independent Ward E Councilman James Solomon who bested Municipal Prosecutor and “Team” Fulop member Jake Hudnut. Solomon ran largely as the “un-bought” progressive candidate with no ties to developers. Hudnut, in contrast, positioned himself as a pragmatist on development and public safety. In the view of some, however, Hudnut was hurt by his metamorphosis from fierce mayoral critic in 2017 to mayoral acolyte in 2021 and the perception that Solomon was a largely responsive and effective councilman.

Said Solomon, “The voters in Downtown Jersey City sent an unambiguous, powerful message: The time when developers planned our community, the time when the machines picked elected officials, and the time when our neighborhood was told to just deal with the status quo is over.”

In economically diverse Ward F, the charismatic Frank “Educational” Gilmore with his made-for-TV life story soundly beat incumbent Jermaine Robinson with 55 percent of the vote. Gilmore fought off a sustained effort that included an anonymous flyer designed to look like a rap sheet and the claim that he was an “anti-vaxxer” following the revelation that he had yet to be inoculated against Covid-19. Robinson, however, was weighed down by his support of an unpopular high-rise development in Bergen-Lafayette and the perception that he was unresponsive to constituents.

Left undecided and headed for a run-off was Ward C, where incumbent and Team Fulop newbie Richard Boggiano was unable to pass the 50 percent threshold. Businessman Kevin Bing, who focused largely on quality-of-life issues and Boggiano’s purported affection for Donald Trump, placed second and will face Boggiano in a runoff on December 7.

If there was a tiny ray of hope for the mayor’s would-be future challengers, it could be found in his margin of victory. In 2017, the mayor won with a whopping 77 percent of the vote. This year, the mayor garnered five thousand fewer votes.

With the exception of the attacks on Gilmore in Ward F and Solomon in Ward E, the campaign was a surprisingly sedate affair. There were few raised voices and fewer attacks. Surprisingly to some, the mayor received little criticism during the campaign for his record on crime and the postponed 2014 revaluation, which cost property owners in wards outside Downtown in excess of $140 million dollars. Instead, the challengers focused mostly on housing affordability rather than public safety and economic fairness. Nor did Team Fulop’s challengers make an issue of alleged corruption surrounding the mayor.

For his part, Mayor Fulop was disciplined in his message that Jersey City was “moving forward” and on it’s way to becoming “the best mid-size city” in America. As evidence, he regularly cited new parks and gleaming high rises as well as glitzy new projects like the Pompidou, SciTech City, and the Loew’s renovation. When affordability was broached, the mayor could point to the massive Bayfront Project with its 35 percent affordable component.  When homelessness was brought up, he could point to the new St. Lucy’s project. His was a positive message that the challengers were never able to overcome.

For many observers, however, the outcome was never in doubt given mayor Fulop’s name recognition and massive war chest. Team Fulop reportedly raised in excess of $3.2 million during this election cycle compared to a paltry $20 thousand for Spears. The defeated council challengers raised similarly small amounts.

Team Fulop’s confidence — some said arrogance — appeared to be in play as Councilwoman-at-large Joyce Watterman skipped all of her debates and Mayor Fulop was a no-show for his final debate with Spears.

Nonetheless, while many of the council candidates appeared to hold their own in debates against Team Fulop members, Spears had decidedly less success against a highly knowledgeable mayor steeped in public policy for twenty years.

Fulop and his team also received significant outside support, garnering endorsements from groups as diverse as the Police Officer’s Benevolent Association and the Working Families Party.

In the end, the well oiled Fulop juggernaut was simply too much for all but one of the underfunded challengers to go up against.