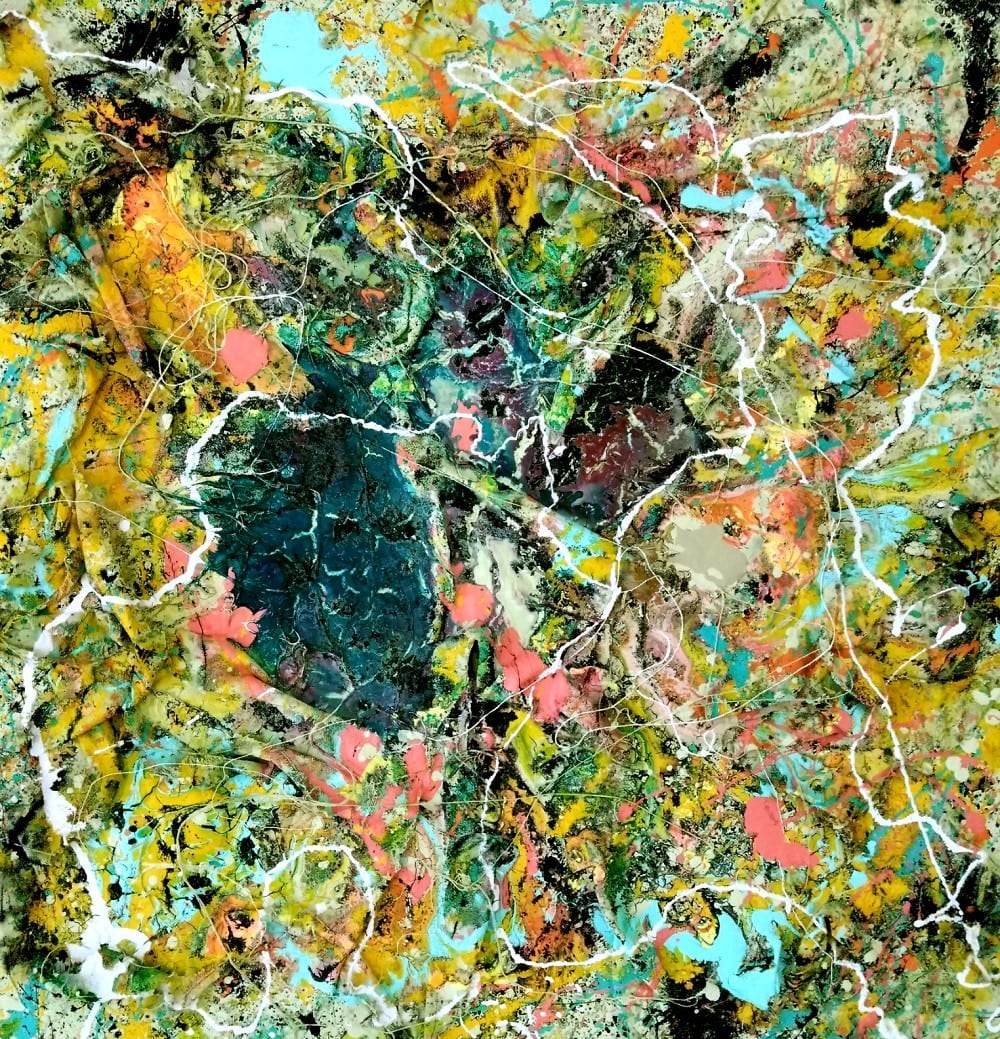 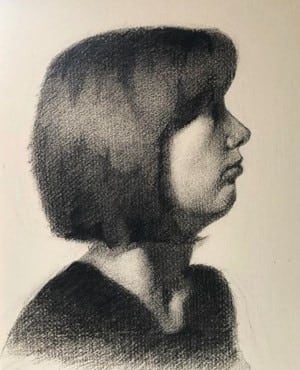 Looking toward the Renaissance: “Sideways,” by Mandy Theis

Hudson County applauds abstraction and bold, passionate, macho gestures of individual self-expression. Artists here are supposed to be sui generis, guided by peculiar inner lights, serving no masters but themselves. Toss soot and tar on a canvas, scrape and bang a rusty tin can into a sculpture, tease out the beauty and drama in some unloved industrial byproduct: that’s the Jersey way, and it’s a good one. It’s served us well. If you’re reading this, you’re probably a rule breaker yourself, and you prefer it when artists proceed with irreverence.

But there are artists in Hudson County who work in traditions that go back further than Warhol’s Factory or even Duchamp’s ready-mades. They speak in a quieter voice than their more flamboyant peers do, but sometimes, when their works talk, they do so with the authority of the ages. “30 Days: One Month of Training in the DaVinci Initiative Atelier” is not the kind of show we’re accustomed to seeing in Jersey City: The assertiveness and ungovernability that so much local art broadcasts is completely absent. In its place is humility, discipline, and deep respect for the most venerated of the masters — the celebrated Leonardo himself, protean wizard of the Renaissance and a figure who, I’d wager, most Jersey City artists and Jersey City residents don’t think about very often.

But perhaps we should! The twenty-plus piece group exhibit, which will be on view in the Majestic Theatre Condominium (222 Montgomery St.) through February 22, makes a strong case that DaVinci remains an exemplar worth following, even in our post-Eurocentric era. The show is heavy on the basics: still life oil paintings, studies of stern-looking individuals, charcoals and pencil sketches, and two accomplished renderings of softly illuminated white spheres on black backgrounds, heavy grays and browns on the palette. Some of these pieces do feel like the results of specific training exercises, and it will surprise nobody to learn that many of the exhibitors are local art teachers. The DaVinci tradition emphasizes fundamentals; these artists put those lessons into practice in pieces of their own. You can see it for yourself when the Majestic throws its doors open to the public for JC Fridays at 6 p.m. tonight.

Mind you, this show is more of a slow burn than a roaring fire. That’s by design, and it’s appropriate to the material.  But these painters and sketchers do hear footsteps behind them. The ghost of the master hovers over the shoulders of these contributors, scouring canvases for flaws and departures from Renaissance orthodoxy. There’s a nervousness about this exhibition that you won’t find elsewhere in town, where creators are flinging around materials with absolute abandon. Nevertheless, when these artists do connect firmly with the tradition they’re chasing, it’s as satisfying as the peal of a church bell in a medieval abbey. Caitlin Bludgus renders a branch-stuffed vase and a gold finger-bowl in oils. Milene Fernandez sketches a foot in pencil with such adamantine precision that it communicates the heft — and ageless sorrow — of a chunk of broken marble statue. In soft, melting charcoal, Mandy Theis captures a woman in side profile: Her model’s eyes are occluded by shadow, but contemplation and slight impudence haunts her face anyway. Her hairstyle is current, more or less. Otherwise, the sketch could have been completed centuries ago.

Yet my favorite pieces in “30 Days: One Month of Training in the DaVinci Initiative Atelier” apply the Renaissance techniques to subject matter that alludes to the present day. Lisa Von Schwichtenberg’s “Blue Twilight” presents us with a character whose psychological depth and complexity marks her as a modern subject: a woman seated in a chair, dressed modestly but alluringly, one knee bent protectively in front of her stomach, her expression slightly haughty but curious and alert, preparing perhaps to be approached. Von Schwichtenberg has chosen to obscure her expression and deepen her mystique by shrouding her face in a soft veil of illumination. It’s a choice that a Renaissance painter — one familiar with the devotional significance of halos — might have made, and it gives this canvas a rare combination of sanctification and sensuality that I reckon DaVinci, rogue that he was, would have enjoyed quite a bit.

The Renaissance-somber mood of the exhibition is augmented by its setting. With its high ceiling, dark-wood wainscoting, and antique wooden staircase to nowhere in particular, the space feels like a rebel gallery that broke off from the Met and floated across the Hudson. Curator Kristin DeAngelis’s other JC Fridays show feels almost compensatory. “Fabric of Life,” a display of fifteen pieces by Anthony E. Boone, is a pure expression of the Hudson County post-industrial style. These rough-hewn canvases stuffed with electric flashes of acrylic and strands of gauzy fibers soaked in paint are busy, big, bright, engrossing, raw, and richly textured: A few of them suggest what Jackson Pollock might have done if he’d ever cultivated a serious interest in fabric. 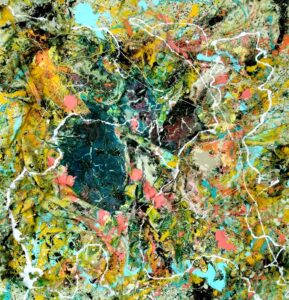 This would be a problem if the work wasn’t as viscerally impressive as it is. But the sheer excitement and emotional effulgence of this atrium show overcomes the sense you may have that you’ve seen these neural nets of color and paint-can-imprint circles before. Through its sheer confidence, “The Ultimate Gift,” a very long panel, renders the Pollock comparisons irrelevant. So bold is Boone’s painting that it might take you a moment to recognize its balance and execution. Those who live at the Hamilton Square Condominiums (232 Pavonia Ave., right near the Van Hook Cheese outpost) will be welcomed home with a big embrace by these pieces until December 27. For the rest of us, there are special viewing events, including JC Fridays. The reception begins at 6 p.m. tonight.

Pure conceptual shows are nearly as rare in North Jersey as tributes to the style and influence of Leonardo DaVinci. We’re materials-minded here; we like to smell the oil and listen to the machinery as it revs. SMUSH (340 Summit Ave.) is well known for art shows that put a premium on tactility. That’s part of their brand, and it’s inscribed in the gallery’s inviting handle. But this JC Fridays, they’re throwing us a curveball. The sly “Art on Toast,” which will be on view through January 18, is exactly what it sounds like: images of scores of works, many of them world famous, digitally superimposed over pictures of slices of bread. Not artisanal bread from french bakeries, mind you, but the Wonder stuff baked in industrial blast ovens, wrapped in plastic, and presented in charmless bulk.

Seen from one perspective, this is all highly impious. SMUSH strips paintings by Botticelli, Botero, Picasso, Twombly and other museum favorites, flattens them out, shrinks them down and spreads them flat on a piece of regulation white toast as if they were pats of Hotel Bar butter. The gallery presents this project with a smile and a wink, and invites visitors in on the joke, but let’s be honest: Like all radical democratizing gestures, “Art on Toast” is an aggressive act and one designed to rankle those who consider masterpieces sacrosanct.

Of course, I’m not one of those people, and neither are you. You might agree that artworks of this quality can stand up fine to a little playful digital manipulation and decontextualization. You may further conclude that the brown, arched crust of a piece of Wonder bread makes a holier and more elegant frame than the ornate wooden ones some of these works were initially burdened with. You may even nod your head at the implicit critique of museum presentation: crowd-pleasing rooms that serve up great pancake-stacks of paintings as if they’re tasty but interchangeable slices of a single processed loaf.

If you really spend some time with the art selected to crown these golden toasts (which you can do at 6 p.m. tonight), you’ll notice that for bread enshrinement, SMUSH has pointedly selected many latecomers to the canon — artists of color like Kara Walker, Jean-Michele Basquiat, and Kerry James Marshall. Among these, the gallery has interspersed toast-portraits of works by relatively unknown locals, prompting a few pertinent questions. Who gets to call themselves part of the staff of artistic life? Who decides what’s worthy and what isn’t — and with what criteria? When it’s all reduced to art on toast, do those distinctions even matter?

The mischief maker behind this project is SMUSH proprietor Katelyn Halpern, a woman who possesses some broad ideas about the practical applications of art and the permeable limits of its appreciation. Halpern is a dancer as well as a visual artist and curator, and on Sunday she’ll take to the floor of Eonta Space (34 DeKalb) for “Fiber and (k)Not,” a movement piece composed in response to Bayard’s wild, enveloping, Seussian sculptural installation, “Theme M Purr Purse Knew Close Or He Nay Kid Mother Far Curr.” This begins at 2 p.m. and lasts until 6 p.m., and it won’t be just Halpern dancing: She’s bringing along a troupe. Bayard encourages interaction with his massive fiber sculptures, many of which seem as pettable as big shaggy dogs, so I’d expect Halpern and company to make some inanimate friends, and possibly some animate ones, too. The show ought to be a fitting conclusion to a weekend celebration of Jersey City audacity and a nice honor bestowed on one of the year’s most emotionally generous exhibitions.  Bayard’s work sure made me feel like dancing.

Updated: Fifteen Places in Town to See an Art Show
Scroll to top