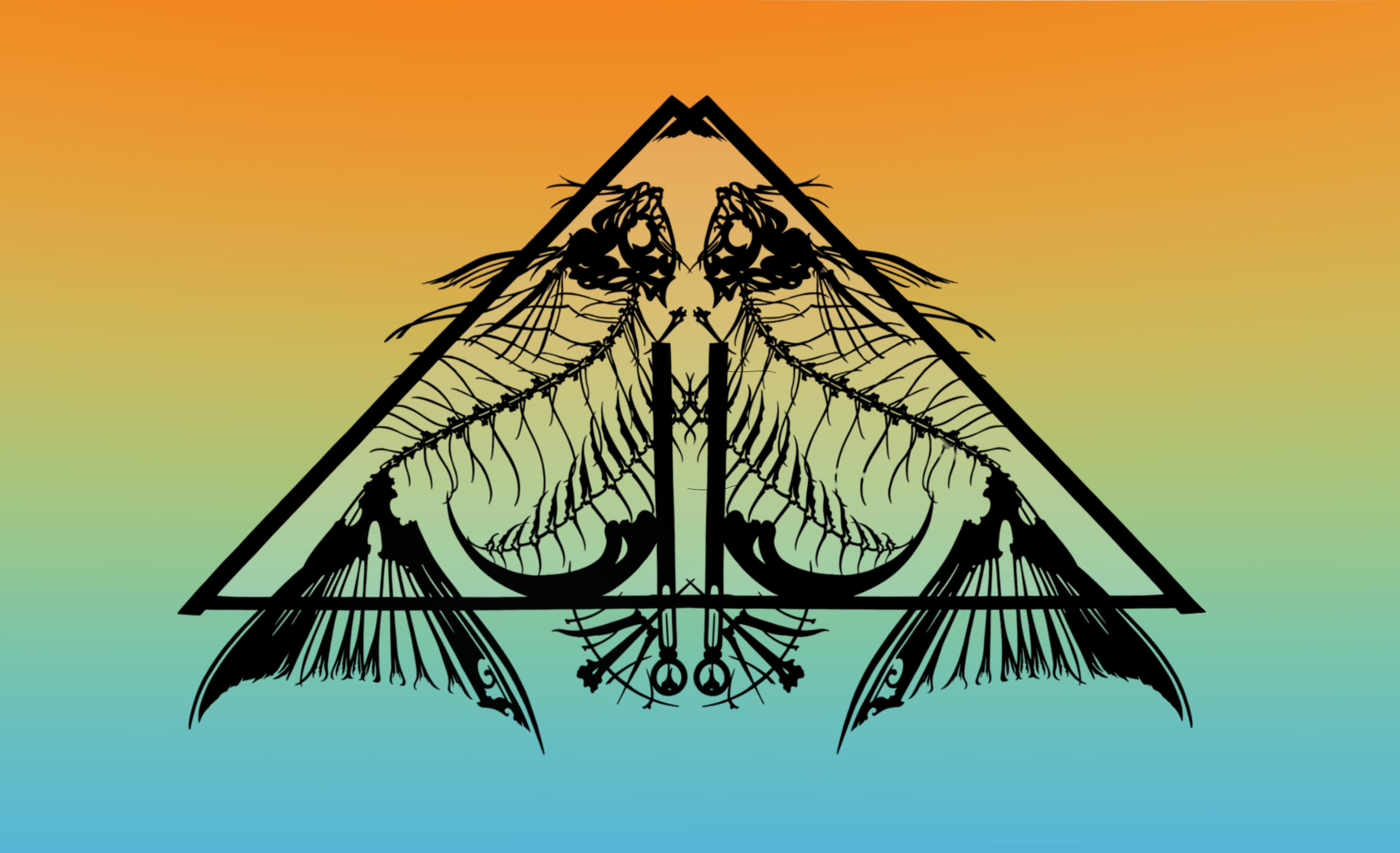 Not every shade of orange is a city color. But the painter Buttered Roll specializes in urban storytelling, and his particular orange is the orange of traffic cones, of road-closure signs, of construction workers’ vests and spray-painted guidelines on tarmac about to be cut. There are other recognizable signs of the city inscribed in the works on display in “Exile in Orange,” which closes at SMUSH Gallery (340 Summit Ave.) on May 9: bodegas, copious cellphones, muggings, Café Bustelo cans, a pair of New Jersey Transit schedules. There’s even that universally recognized sign of urban peril – a piano in mid-move, dangling over a street. 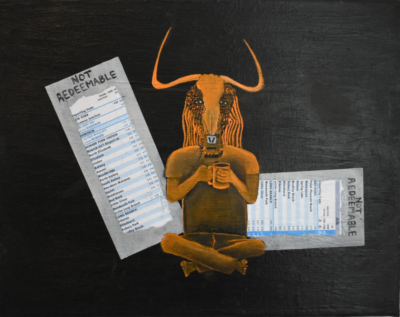 Is that rope going to snap?  Probably not.  But the threat of catastrophe and violence hangs over all of these paintings in orange, black, and a blended ochre shade in between the two. In the show’s centerpiece, a scowling bald thief in hot orange sticks up an androgynous pedestrian too absorbed in her cellphone to notice she’s being assaulted.  Other people on the street are caught up in their own screens, and miss the robbery altogether.  This is Kitty Genovese reimagined for the digital era, and disturbingly, it doesn’t seem too far-fetched. Signs in the windows of the corner shop promise blockchain certification and star maps, and tell us, as if we needed the reminder, that we’re all on camera. A street sign stuck into the top of a traffic cone points toward eternal recurrence.

So: this is a cheeky Hobokenite with a developed sense of irony and plenty to say, and he doesn’t mind if you occasionally prick your curious fingers on the points he’s making. Buttered Roll thinks sequentially – a few of these pieces are akin to newspaper strips in black and orange marker – and there’s a main character to this story, too, a human figure with a bull’s head and a variety of chatty t-shirts.  He’s your guide on this journey into the purgatory that is certain precincts of Hudson County, and he’s probably also a proxy for the artist. This weekend is your last chance to immerse yourself in his lurid world — one which, as it turns out, bears an uncanny resemblance to our own.

Unlike Buttered Roll, oil painter Robert Glisson isn’t an artist you’re likely to bump into on Washington Street. He lives in upstate New York, and his luminous landscapes are bucolic ones. But he’ll be in the heart of the city (our city) on Saturday, May 8, from 2-4 p.m., when he’ll meet visitors to 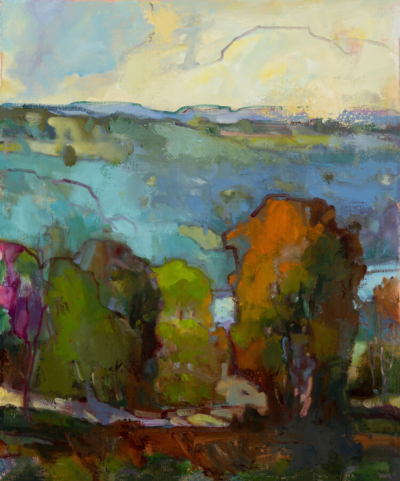 “Journeys,” his show at Novado Gallery (110 Morgan St.).  Glisson has presented at Novado before: he was part of a trio of landscape artists featured in an exhibition that ran in the winter of 2020, just before the pandemic shut everything down. Next to Nathan Sullivan’s imagined extraterrestrial forests and Diana Godfrey’s stark, transportive horizontal seascapes, Glisson’s work was slightly outshouted.

This encore performance reveals him to be a wilder painter than the 2020 show indicated — or perhaps he’s just in a more vivacious mood.  His landscapes erupt with color (pink and lavender) not often associated with the pastoral, and the softness of the curves of his treetops belies the subtly kinetic feel of his latest work.  Everything appears to melt under sunlight, with trees, fields and mountains softening like great mounds of ice cream.  In the vertical canvas “Near and Far,” whispers of fantasy pink are everywhere: in the trail leading down a hill to a wood, in the canopy of leaves, even in the clouds above the expanse.  His “Recollections” of a farmstead are bathed in the otherworldly pink and purple of a perfect sunset. The show closes on the 15th, and that seems appropriate.  An exhibition like Glisson’s latest is meant for the highest days of spring.

Mor, a New Jersey artist with a firm hand with a blade, makes stencils with lines so fine that her designs often take on the quality of lace. Under her knife, the hidden organic quality of paper becomes palpable, as she cuts strips that mimic the texture of a bird’s feather, or the breakability of a sun-dried fishbone, washed up on the beach and waiting for careful unearthing. The main piece in “Shoreline,” her show at 313 Gallery (313 3rd St.), is nothing so fragile — it’s a great blue-grey wolf with curved ears, a beard reminiscent of that of a Norse warrior, and questioning eyes.  Buttered Roll, surely, would recognize this as an avatar for the artist herself, approaching her paper cutting with a diagnostic stare that slices through the chaos, and peril, of subtractive art.  She’ll be present at 313 Gallery from 2 p.m. until 7 p.m., every Saturday and Sunday, until the show closes on May 23.

Six blocks due east, there’s another tough-minded show from an artist whose physical relationship to her work is apparent in every bare-knuckled piece she hangs. Sandra DeSando is a veteran of the Jersey City arts scene: her restless aesthetic was part of the personality of the Arts Center at 111 First 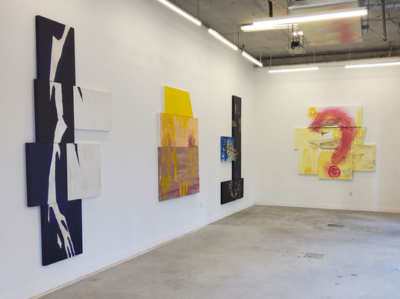 Street, and she’s brought some of that rough-hewn sensibility to the gleaming, still-new Dvora Gallery (160 1st St.) The pieces in “Puzzlement” consist of connected acrylics on large wooden panel boards that are jigsawed together to create large aggregate paintings. Sometimes the pieces fit, and sometimes the blocks seem deliberately and uncomfortably married, as if they were pressed in place by a frustrated child determined to finish the puzzle by any means necessary.

“DNA Swirling into a Cell” is a blue zigzag on yellow and green backgrounds; “Spine,” disturbingly but effectively, seems to be coming apart.  Coercion and destabilization, connection and deterioration — these are the forces she’s playing with, and it’s fitting that she’s brought some vintage 111 explosiveness to the otherwise anodyne Oakman Condominiums.  It’s not just an echo of where we were. It’s where we still are.  Oh, and if you’d care to, you can visit a remarkable simulation online: Dvora has posted a 3D version of “Puzzlement” at https://www.drawingrooms.org/dvora-gallery.html.  Enjoy it, but consider it a teaser.  These are the kinds of artists who’d like you to show up in person.  Luckily, that’s a lot more realistic today than it was one year ago.

Featured work at top is by Mor at 313 Gallery